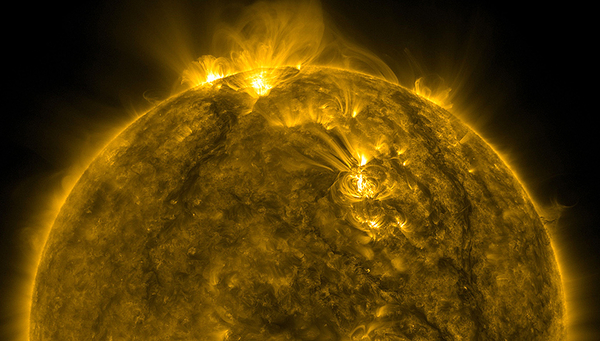 The Sun determines the course of the planets. But the planets may also exert an influence on the Sun. Their configurations appear to be responsible for long-term cycles of increased solar activity. Scientists at Eawag and the ETH Zurich, in collaboration with colleagues from Spain and Australia, have compared cycles of solar magnetic activity over the past 10,000 years – as reconstructed from ice cores – with the action of the planets. The agreement observed is very striking, raising hopes that our ability to forecast periods of intense solar activity may ultimately be improved. This is becoming increasingly important as our society is ever-more dependent on technologies such as satellite communications and navigation systems – as well as power grids – which can be disabled by major solar eruptions.

The Sun accounts for over 98% of the total mass of our solar system, and its gravitational field keeps the planets in their orbits. To date, the effects exerted by the planets on the Sun have been regarded as negligible – akin to the relation between a gnat and an elephant. But it would seem that a well‑placed gnat bite can in fact inflame an elephant, and an international team of scientists has shown that something similar could happen to the elephantine Sun. The relatively small torque exerted by the planets appears to be the cause of the long-term cycles of solar activity. The well-known periodicities of 88, 104, 150, 208 and 506 years observable for the last 10,000 years correspond precisely to the periodic changes in torque exerted by the planets on a thin layer in the solar interior known as the tachocline. Marking a transition between the radiative and convective zones in the Sun, the tachocline is believed to play a fundamental role in the generation of the solar magnetic field. The scientists suspect that planetary torque may act on this layer in a manner similar to the tidal effects of the Moon on the Earth. Thus, even small changes in the tachocline could affect the occurrence of solar eruptions.

In their study, to appear soon in Astronomy & Astrophysics*, the lead authors José Abreu (Eawag/ETHZ) and Jürg Beer (Eawag/ETHZ) show why they find the idea of planetary influence so convincing. Tracing the five most prominent periodicities of solar activity back over the last 10,000 years, they observed that the peaks and troughs reappear with precisely the same periodicity even after being attenuated or vanishing altogether for some time. Beer concludes: "Everything points to an external 'clock', and that can really only be the planets."

Direct evidence of the number of sunspots (a measure of solar activity) has only been available for about 400 years – the era of telescopic observations. Anyone wishing to trace the history of solar activity further back over the last 10,000 years has to rely on indirect evidence. This evidence was obtained from polar ice cores (from Greenland and Antarctica), in which radionuclides produced by cosmic rays are stored. During the Sun's quiescent periods, more cosmic rays enter the atmosphere – with increased production of radionuclides – as the blocking effect of the solar magnetic field is weaker. In addition to ice-core beryllium (10Be) data, the authors also used tree-ring carbon (14C) data for their study. Both time series show excellent agreement.

Improved understanding of the Sun

Abreu and Beer are still describing their conclusions cautiously as a "hypothesis"; however, if the team's findings are confirmed, they will be of major importance. Firstly, should help to improve our understanding and to develop more realistic models of the Sun. In addition, they could help to generate more reliable forecasts of the "space climate" or even "space weather" – a matter of great importance for longer space voyages. But those of us who remain earthbound are also affected by solar magnetic activity, as our society is increasingly reliant on vulnerable technical installations (see Box).

Vulnerable electronic systems
Superflares are massive eruptions of solar plasma, hurling billions of tonnes of gas into the atmosphere and causing magnetic storms in space and on the Earth. Satellites, aircraft avionics, power grids, radio signals and many other systems could be disrupted or destroyed by an event of this kind. In 1859, the solar flare observed by the British astronomer Richard Carrington only disrupted the telegraph networks which had recently been established in Europe and North America. Today, it is estimated that a geomagnetic storm of the same magnitude would cause around two trillion (2x1012!) dollars' worth of immediate economic damage in the US alone. Whether an improved understanding of solar magnetic activity will help to predict the frequency and intensity of such eruptions remains an open question. As Jürg Beer admits, "Storm warnings are still a long way off." But the recent research takes us one step closer towards being able to give a better explanation of the longer-term "space climate".