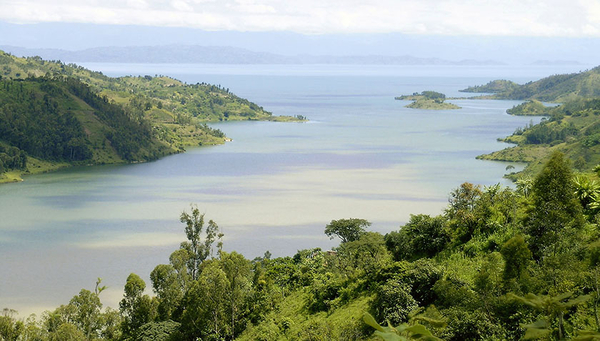 The main findings of the most recent research partnership project “Lake Kivu: Learning from the past for managing its future”, were presented in two workshops in Kigali and Bukavu. Researchers from the Kigali Institute of Science and Technology (Rwanda), the Institut Supérieur Pédagogique of Bukavu (DR Congo) and Eawag had jointly investigated this fascinating lake during the past three years. They identified numerous volcanic features on the lake floor, determined the locations and properties of subaquatic springs feeding the lake, investigated the effects of fish introduction in sediment cores, and developed a water balance model to explain the lake level variations.

Lake Kivu is a unique lake located in the East African Rift. It is the only lake in the world that contains such large amounts of dissolved methane that it could be used for commercial electricity production. The dissolved gases in the lake are also an unusual natural hazard, as a strong event, such as a volcanic eruption within the lake, might potentially lead to a catastrophic gas release. The lake is also very interesting from the scientific point of view, as its special properties make it a perfect natural laboratory to investigate physical, chemical or microbiological processes. In the last decade, since the eruption of the Nyiragongo volcano in 2002, lake has been the subject of several research and consulting activities, where almost all research groups of the department of Surface Waters at Eawag have been involved.

The workshops – following the idea of the International Year of Water Cooperation – were attended by a very interested audience from ministries, environmental agencies, research institutes, fishery cooperatives and methane extraction companies. The presentations were followed by lively discussions relating the research to the upcoming methane extraction, fisheries, and the build-up of local research capacities. The workshops also aimed at motivating local researchers to join their forces for developing research proposals and submitting them to potential funding agencies.