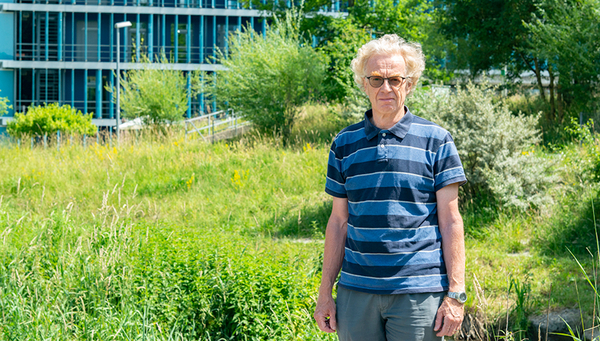 Professor Peter Reichert’s 37 years of research at Eawag were characterised by his mathematical view of water and bodies of water, combined with his interest in environmental practice. He bridged the gap between theory and practice, enabling creative approaches to solutions that are used for surface water management in some places today.

Peter Reichert says: “I am fascinated by using mathematical methods to contribute to understanding environmental systems and to support their management.” When he came to Eawag in April 1985, after completing his degree and doctorate in theoretical physics at the University of Basel, he had, by his own admission, no idea about environmental sciences. However, he soon discovered how exciting and varied the subject is. His interest was awakened. He linked theory and practice, combined mathematics and environmental sciences and therefore brought new perspectives to Eawag. For 37 years, he was committed to developing both statistical methods and practical solutions for environmental challenges, as a researcher and later as head of department and member of Eawag’s Directorate. His fair and objective manner and sense of justice were greatly appreciated by his research colleagues. He listened before making decisions and made sure that everybody had the same opportunities.

He was enthusiastic about models, uncertainty and decision support

Peter Reichert mainly worked in three areas at Eawag: the modelling of aquatic systems, quantification of uncertainty and decision support in managing watercourses. He worked on modelling from the very beginning: “All scientific understanding is a model. Modelling is therefore absolutely central to understanding environmental systems.” However, modelling wouldn’t be possible without data collection and experiments. “We need data to design and test the models. Natural science is based on data,” adds Peter Reichert.

The topic of uncertainty came later. “Because our knowledge is never complete, all model forecasts are subject to uncertainty,” explains Peter Reichert. “Quantifying and communicating this uncertainty is very important for the integrity and credibility of science. We therefore put a key focus on Bayesian statistics. Its methods enable existing but uncertain knowledge about environmental systems to be combined with information from measurement data to reduce the uncertainty of forecasts.”

Precisely understanding the needs of society

The third area from mathematics that Peter Reichert established at Eawag is formalised decision support: “Eawag has a long and very successful history of supporting environmental practice in making decisions. Together with practice, the researchers devise optimal solutions to environmental problems that are then incorporated into laws, directives, implementation aids and teaching. With the formal method of decision support, we try to make this process more explicit. As a result, it becomes more transparent, flexible and easier to analyse. Formalisation of this process also makes it easier to communicate the reasons for a decision in a comprehensible way.”

The new methods for quantifying uncertainty and decision support haven’t just become established at Eawag. They are increasingly frequently also used successfully in practice, especially for the revitalisation of watercourses. From the very beginning, Peter Reichert was concerned with bringing together research and practice and considering the needs of society in research. He therefore discussed the needs and possible hierarchies of objectives of environmental experts and authorities with them in various task forces. However, it wasn’t just about transferring research results into practice. “When working together with the environmental sector, researchers are often confronted with new problems that prompt us to investigate new aspects of the system or to develop new scientific methods. This close contact also leads to us making progress in theory,” says Peter Reichert.

Cooperation is more important than the individual

Peter Reichert always stresses that he didn’t achieve anything alone in any of the projects or issues. Cooperation is very important to him. Peter Reichert is convinced: “The diversity of the people and their ideas at Eawag gives it an extremely creative atmosphere. That’s important in research. Knowledge isn’t usually advanced by individuals. It takes constructive cooperation of different ideas and joint implementation of projects.” He believes that the trend is tending to move in the wrong direction these days. “The competition keeps getting bigger. Researchers are increasingly forced to sell themselves as the best. Constructive collaboration is valued much less,” he regrets.

Peter Reichert made an important contribution to the development of Eawag with the “Systems Analysis, Integrated Assessment and Modelling (SIAM)” department that he helped to set up and managed for 20 years. “The department has made a substantial contribution to bringing new methods to Eawag. The Eawag Summer School in Environmental Systems Analysis, in its 13th year this year, also contributes to this. Carlo Albert took over its management a few years ago.” Around 30 young researchers from Eawag and research institutes all over the world take part in this continuing education event every year. It therefore contributes both to international networking and to internal continuing education.

Peter Reichert has also taught at ETH Zurich since 1991, first as a lecturer, later as visiting lecturer and since 2002 as an adjunct professor in the fields of mathematical modelling of aquatic systems, systems analysis and decision support. Furthermore, he has contributed to many courses for sector professionals at Eawag. Peter Reichert was also a member of the Directorate from 2005 to 2015: “Helping to shape Eawag’s strategy was a very exciting task, even if research came up short at the time.” He was therefore happy to hand over the role to his successor Christian Zurbrügg to focus on research and managing his department.

“Working at Eawag was a privilege”

One and a half years ago, Peter Reichert handed over department management to his successor Nele Schuwirth. He is happy to have been able to leave the management in excellent hands and he is convinced that the department will continue to develop successfully thanks to the new management, group leaders and colleagues. At the end of June, Peter Reichert will be retiring from Eawag after 37 years. Looking back, he says: “I always felt privileged to work at Eawag. I would like to thank my group, all of my colleagues at Eawag and in the research environment for the stimulating cooperation.”

And what does he have planned for his retirement? “I will change from thinking in working days and weekends to good weather days and bad weather days,” explains Peter Reichert. As a keen jogger, ski tourer, climber, hiker, cyclist and glider pilot, sunny weather finds him in the great outdoors. He is still looking forward to taking his research colleagues on some of his trips into the mountains, as he has done in past decades. However, in bad weather he will work from home on selected projects together with colleagues from Eawag.