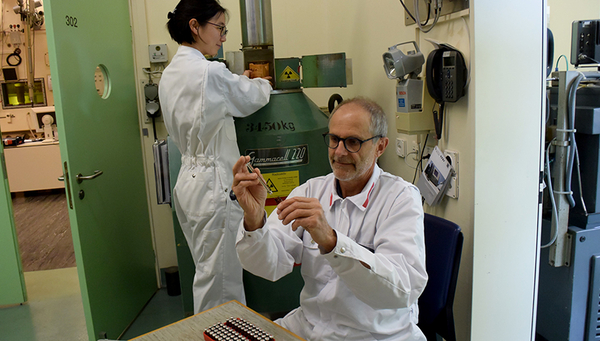 Eawag scientist and EPFL professor Urs von Gunten is to receive the prestigious ACS Award for Creative Advances in Environmental Science and Technology. His research on oxidative processes in water has led to practical applications and improvements in both drinking water and wastewater treatment.

Though he is not one to seek the limelight, keen mountaineer Urs von Gunten has now reached a career summit: he is to receive the American Chemical Society’s Award for Creative Advances in Environmental Science and Technology (see Box).

From the laboratory to everyday applications

Urs von Gunten has more than 25 years of research experience in the field of chemical oxidation processes in water. His main interests are kinetic and mechanistic studies of oxidative transformations of micropollutants and the formation of disinfection by-products through the reaction of chemical oxidants with natural organic material, bromide and iodide, and the resulting (eco)toxicological consequences. In addition to his academic work, he attaches great importance to cooperation with practitioners in the water sector.

From groundwater to wastewater

After completing his doctoral thesis on the oxidatively induced hydrolysis of iron in lakes, Urs von Gunten began his career as a postdoctoral researcher at Eawag in 1989. Initially, he worked on the investigation of biogeochemical processes in groundwater infiltration systems, conducting experimental and modelling studies. He then focused on the chemistry of oxidation processes in water and wastewater. He followed a rigorous kinetic and mechanistic approach, using the results obtained for highly practical applications, such as oxidative chemical water treatment with a focus on ozonation, advanced oxidation, and also widely used chlorination processes. His studies were initially focused on drinking water treatment and subsequently on chemical oxidation processes in municipal wastewater treatment.

Bridge-builder with an extensive international network

Throughout his career, Urs von Gunten has acted as a bridge-builder between science and practice, successfully translating chemical concepts in such a way that they could be applied to engineered systems. His contributions have made water treatment by chemical oxidation more scientific and less empirical. He himself describes the award as “recognition for the great cooperation and exchanges at Eawag, EPFL and with practitioners, as well as the excellent conditions for research in Switzerland”. Not least, von Gunten pays tribute to his colleagues: “This award also belongs to all the current and former talented researchers and technicians in my team who have given me a lot of inspiration and put ideas into practice.”

“This award also belongs to the many current and former talented researchers and technicians in my team.”
Urs von Gunten

Urs von Gunten has conducted most of his research in Switzerland, but also worked extensively in Europe, the US and many other countries (e.g. South Korea, China, Vietnam and Australia). He holds a PhD in Chemistry from ETH Zurich and is a group leader at Eawag, a full professor at EPFL and an adjunct professor at ETH Zurich. He is co-author of a book on ozone chemistry – which has also been translated into Chinese – and has published more than 260 papers in scientific journals.

Ever closer to online quality control

In addition to his academic work, he has made important contributions to water quality in Switzerland. From 2004 to 2008, he led the transdisciplinary project “Water Supply for the 21st Century”, in which novel systems for improved drinking water treatment were developed and implemented. From 2013 to 2016, he was co-leader of “Regional Water Supply Basel-Landschaft” – a transdisciplinary project investigating various aspects of water supply, such as microbiological quality, micropollutant contamination, drinking water treatment, structural and organisational deficits, and groundwater management for safe drinking water. In collaboration with the Zurich water utility (WVZ), he developed an online measurement system to determine ozone depletion kinetics, which allows real-time calculation of disinfection and micropollutant oxidation at large-scale plants. This represents a major step forward in real-time quality control for drinking water.

The ACS Award for Creative Advances in Environmental Science and Technology

The Award for Creative Advances in Environmental Science and Technology has been granted annually since 1978 by the venerable American Chemical Society (ACS), founded in 1876. Among the first recipients – in 1980 – was former Caltech professor James J. Morgan, who in 1970 had published the standard textbook Aquatic Chemistry with then Eawag Director Werner Stumm. In 2006, the award was bestowed for the first time on a non-American – Eawag researcher and ETH professor René Schwarzenbach. Since then, there have only been two other European recipients – François Morel (F) and Kevin C. Jones (UK), although Morel’s research was mainly conducted in the US. Though the award is worth “only” USD 5000, it is highly regarded. According to the ACS website, the purpose of the award is “to encourage creativity in research and technology or methods of analysis to provide a scientific basis for informed environmental control decision-making processes, or to provide practical technologies that will reduce health risk factors”.

The official award ceremony will take place on 22 March 2022 at the ACS conference in San Diego, California. Urs von Gunten has invited eight speakers to participate in the symposium to be held in his honour.