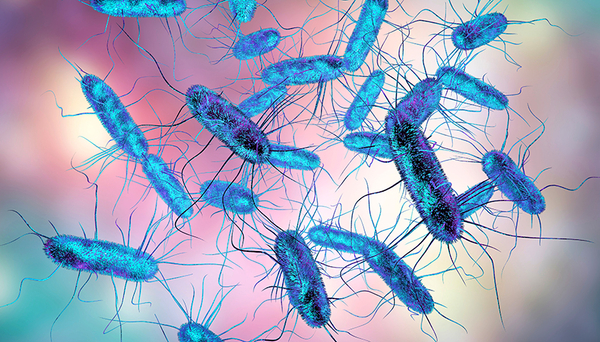 Salmonella infections can result in a broad spectrum of illnesses. According to the latest research findings, one reason why some cases are harmless while others are very severe lies in the intestinal flora.

An infection with Salmonella can have very different consequences. While some infected people do not notice the infection with the bacteria at all – this is called an asymptomatic progression – others suffer from severe gastrointestinal complaints. In extreme cases, Salmonella infections can even lead to death. Until recently, it was largely unknown why the disease varies so much in severity.

Now microbiologist Alyson Hockenberry, a postdoc in Prof. Martin Ackermann's Environmental Microbiology research department at Eawag, has discovered a possible cause: the infected person's natural intestinal flora and its metabolic products. Together with other researchers from the Eawag Water Research Institute and ETH Zurich, she has discovered that short-chain fatty acids, which are produced by bacteria resident in the intestine, can have a decisive influence on the course of the infection.

Salmonella usually enters the digestive tract through contaminated food. In order to displace the natural intestinal flora as quickly as possible and colonise the intestine themselves, the pathogens have a few tricks up their sleeve. "One trick is to form different cell-types in populations of genetically identical bacteria," says Hockenberry. "Each cell-type specialises in a particular task. This has advantages because the cooperation of the different cell types increases the ability of Salmonella to cause disease."

One cell-type, for example, specialises in causing inflammation in the intestinal mucosa. On the one hand, such inflammations increase the availability of nutrients for Salmonella; on the other hand, they lead to the breakdown of the natural intestinal flora. This opens up niches for the invading pathogens to colonise. A second cell-type, in turn, specialises in growing rapidly and thus occupying the vacated niches as quickly as possible. The interaction between the two cell-types gives Salmonella a clear advantage. Within a few hours, they can displace the bacteria of the natural intestinal flora and proliferate.

The intestinal flora strikes back

However, the intestinal flora is not defenceless. Through experiments and stochastic simulations, the research team led by Alyson Hockenberry was able to show that short-chain fatty acids, i.e. the metabolic products of the natural intestinal flora, slow down the growth of the cell type that causes inflammation. The higher the concentration of the fatty acids, the more growth was inhibited. "Our results suggest that the metabolic products can influence the cooperation of the cell-types and thereby weaken the spread of Salmonella," says Hockenberry.

Possible explanation for asymptomatic courses of the disease.

"We hope that the new findings will give us a better understanding of how asymptomatic infections generally develop," says Alyson Hockenberry. "After all, infections without symptoms often play an important role in the transmission of diseases, as we are currently seeing with the Corona pandemic."