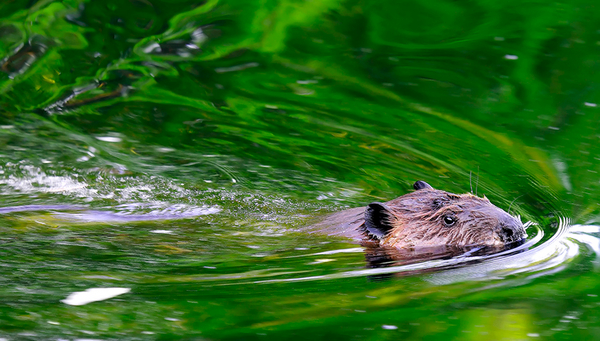 Beavers are master builders that reshape aquatic landscapes with their dams and lodges. The environments they inhabit experience an increase in the biodiversity of aquatic organisms, for example. Now, for the first time, an Eawag study from the wine-growing region known as “Zürcher Weinland” has shown that this is also true for streams in areas given over largely to agriculture. The rodents could therefore be interesting partners when it comes to enhancing bodies of water.

Eradicated at the start of the 19th century, beavers can now be found once again almost anywhere across the length and breadth of the country. Particularly on the Swiss Plateau and in the last ten years, they have become so widespread that five to six thousand individuals are currently estimated to live in Swiss bodies of water.

The rodents are known for making significant changes not only to the morphology but also the hydrology and ecology of natural watercourses, making them more dynamic and biodiverse. Until now, however, it was unclear whether this was also true of urban and agricultural streams – in other words, precisely those streams that the beavers predominantly inhabit today. Researchers from Eawag and the University of Lausanne have now shown that this is indeed the case: beaver ponds not only increased the biodiversity of two streams in agricultural areas, but also altered the food supply available to aquatic animals. However, the extent of the beavers’ influence depended strongly on the topography.

At the Mederbach in the municipality of Marthalen, the beaver dams have created a swamp-like wetland area.
(Photo: Christopher Robinson)

For their study, the researchers examined two streams in the Zürcher Weinland region in which beavers first began to construct several dams more than ten years ago: the Mederbach in the municipality of Marthalen and the Langwisenbach in the municipality of Flaach. As the results show, the beavers have had a positive impact on the streams in many respects. For example, the resulting ponds retain sediments and nutrients that would be carried away immediately in an undammed stream. The ponds also mean that more terrestrial food sources are available to aquatic organisms. Last but not least, the ponds have created new habitats, allowing animals to establish themselves that are otherwise found in calm bodies of water rather than fast-flowing ones. This has increased the aquatic biodiversity of the overall system. Although all of these effects were observed in both streams, they were more pronounced in the Mederbach than in the Langwisenbach. This can be explained by differences in topology: as the Mederbach has a shallower gradient than the Langwisenbach and is not restricted at the sides by a ravine-like basin, it has a greater amount of space in which to change. Overall, the beaver ponds on the Mederbach were also much wider and less deep.

The extent to which beavers can alter their habitat depends on the topography of the stream. In the Langwisenbach, the width of the beaver ponds was restricted by the banks on both sides.
(Photo: Christopher Robinson)

Noticeable results in a short time

“Our results show that beavers can also enhance agricultural streams from an ecological perspective”, says Christopher Robinson, an aquatic ecologist and lead author of the study. Robinson adds that, as revitalisers, beavers represent a simple and sustainable solution that is already being pursued in Switzerland. Moreover, many of the positive effects are apparent within the first year, such as the colonisation of the new habitats. In the studied streams in Marthalen and Flaach, this even included endangered species such as dragonfly larvae. From the scientist’s point of view, the return of the beaver is therefore a win-win situation. “However, if the populations continue to expand so successfully, there will inevitably be some conflicts”, Robinson points out.

Beaver populations are increasing throughout Europe and especially in Switzerland. Beaver are major ecological engineers of fluvial systems, dramatically influencing river morphology, ecohydrology and, consequently, aquatic and terrestrial biota. This study compared macroinvertebrate assemblages and trophic structure at two beaver complexes with contrasting topography in Switzerland over an annual cycle. One complex (Marthalen) was in a low gradient open basin, whereas the other complex (Flaach) flowed through a higher gradient ravine-like basin. Both complexes were embedded in an overall agricultural landscape matrix. Water physico-chemistry differed between the two complexes with nitrogen, phosphorus, and DOC being higher at Marthalen than at Flaach. Both complexes showed strong seasonality in physico-chemistry, but retention of nutrients (N, P) was highest in summer and only at Marthalen. Both complexes also showed strong seasonality in macroinvertebrate assemblages, although assemblages differed substantially between complexes. At Marthalen, macroinvertebrate assemblages were predominantly lentic in character at 'pool' sites within the complex. At Flaach, lotic macroinvertebrate assemblages were common at most sites with some lentic taxa also being present. Dietary shifts based on carbon/nitrogen stable isotopes occurred in spring and summer among sites at both complexes (autochthonous resource use increasing over allochthonous resource use downstream), although being most pronounced at Marthalen. In contrast, similar resource use across sites occurred in winter within both complexes. Although beaver significantly influenced fluvial dynamics and macroinvertebrate assemblage structure at both complexes, this influence was most pronounced at Marthalen where beaver caused the system to become more wetland in character, e.g., via higher hydraulic residence time, than at Flaach. We conclude that topography can shape beaver effects on fluvial systems and resident biota.
See DOI
See Institutional Repository
Robinson, C. T.; Schweizer, P.; Larsen, A.; Schubert, C. J.; Siebers, A. R. (2020) Beaver effects on macroinvertebrate assemblages in two streams with contrasting morphology, Science of the Total Environment, 722, 137899 (9 pp.), doi:10.1016/j.scitotenv.2020.137899, Institutional Repository
Created by Felicitas Erzinger, Andri Bryner
Share with others: