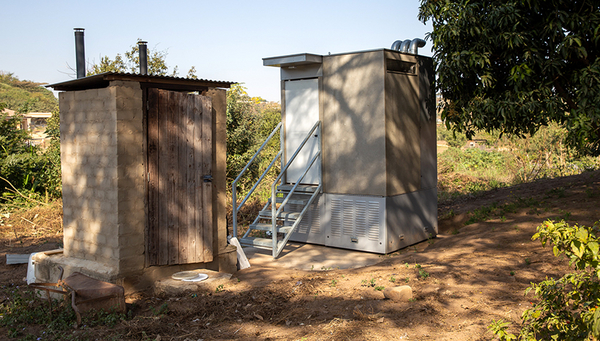 For three months, an extended family in South Africa tested the standalone Autarky toilet cubicle. Everyone was very happy with the quiet hideout.

“I am really proud of our technology and can see huge potential in it”, says Eva Reynaert, who was involved in the project and was one of the advisors during the field testing. The Blue Diversion Autarky toilet offers great advantages, particularly to less-developed regions of the world: It works without a water mains connection and does not need a sewerage connection either. By separating out grey water, urine and faeces, valuable resources such as water and fertiliser nutrients can be recovered. “We had got to the stage where we were ready to test the Autarky under real-life conditions”, explains Reynaert.

Working with a team of researchers, Reynaert set up the Blue Diversion Autarky toilet next to an existing dry toilet on the land of a 14-person family on the outskirts of Durban, in an area without a sewerage connection. The toilet functioned independently and, for the most part, without any hitches. As well as the technologies behind the toilet, the sanitation hardware (wash basin, urinal and a newly-developed water-flush urine separation toilet) were also the subjects of the testing. The social acceptance of this kind of toilet system was also under scrutiny during the testing period, as well as the toilet’s technological performance.

The advantages of a quiet hideout

In contrast to the earlier dry toilet, the Blue Diversion Autarky toilet provides its users with all the advantages of a modern toilet, with privacy, closeable door, electric light, window and its own wash basin with soap and a mirror. The water flushing means that the environment remains odour free. This went down particularly well with the residents, who enjoyed using the toilet cubicle - even if just to grab a moment’s peace on one’s own.

Urinal and wash basin in the Blue Diversion Autarky toilet cubicle in Durban.
The separation toilet is not shown.
Photo: Autarky, Eawag

The urine and water modules prove themselves worthy

The water and urine modules were what were on trial, as the development of the faeces module had not yet been completed. A technician checked the system parts two to three times a week, and filled up the water, some of which was lost due to evaporation and in the process of separating solids from urine. He also took samples of water and urine so that these could be analysed in the laboratory.

The water module, which cleans the water from toilet flushing and then returns it, functioned largely without any errors. “A power cut lasting several hours led to a high level of nitrite in the water, although this presented no problems as far as toilet flushing was concerned”, explains Reynaert. “One one occasion, the technician forgot to switch a pump back on, and right at the beginning one of the pipes was not properly connected and so it was dripping slightly. But the technology itself functioned extremely well.”

The urine module turns the urine that has been separated from the faeces and flushing water into fertiliser, stabilising and drying it out. During the stabilisation process, important plant nutrients, some of which are easily lost, are fixed in the urine, while pathogenic microbes are killed and odour build-up is prevented. The system operated smoothly throughout the three months. Once a month, the concentrated urine product was removed. “In terms of the quality of the fertiliser in future, we identified some room for improvement, as a substantial proportion of nitrogen was lost in the process in this field test”, says Michel Riechmann, who was responsible for the urine module testing in Durban.

Urine treatment at 2,200 metres - the SAC is also interested in new wastewater treatment solutions for its mountain huts, as shown here with this joint pilot project between the engineering firm Vuna and Eawag.
Photo: Michel Riechmann, Eawag

Positive results from testing in Switzerland

The urine module has not only been tested out in Durban, but also in field tests as a standalone module in combination with dry toilets in Au on Lake Zurich and at the Legler Hut in the Glarn Alps. Here, too, the automated operation of the toilet module was successfully repeated. The low temperatures at times did lead to a more extended drying out process. Thanks to the additional photovoltaic modules which were installed in the toilet, the urine module was fully self-sufficient even at an altitude of 2,200 metres.

The research for the self-sufficient Blue Diversion Autarky toilet cubicle began back in 2011 with the “Reinvent the Toilet Challenge” initiated by the Bill and Melinda Gates Foundation. In the Blue Diversion project, the foundations were laid for a mobile separation toilet that recycles water for handwashing and WC flushing. The new Autarky toilet is designed to treat not only water, but also urine and faeces in situ, and thus render separate treatment off site unnecessary. The water, urine and faeces modules can also be used individually or in combination with other technologies, depending on the situation.

Socio-technical analysis of a sanitation innovation in a peri-urban household in Durban, South Africa

The provision of water and sanitation for all that is safe, dignified, reliable, affordable and sustainable is a major global challenge. While centralized sewer-based sanitation systems remain the dominant approach to providing sanitation, the benefits of non-sewered onsite sanitation systems are increasingly being recognised. This paper presents the outcomes of the testing of the Blue Diversion Autarky Toilet (BDAT), a sanitation system providing hygiene and dignity without relying on water and wastewater infrastructure, in a peri-urban household in Durban, South Africa. The BDAT was used by a single household as their only form of sanitation during three months of technical and social testing. An analysis based on technical data in combination with interpretive, qualitative research methods revealed that the BDAT functioned well and achieved high levels of social acceptance in the test household. The flushing, cleanliness and odour-free nature of the sanitation technology, its functionality, the household's previous sanitation experience, and their experience with and understanding of water scarcity, were the main factors underpinning their positive response to this innovation in sanitation. The testing process resulted in broader developmental benefits for the household, including improved basic services due to the upgrading of the electrical and existing sanitation system, social learning, and improved relationships between household members and the local state. A transdisciplinary research process, which emerged through the assessment, enabled the integration of different forms of knowledge from multiple actors to address the complexity of problems related to the development of socially just sanitation. The benefit of engaging with societal actors in sanitation innovation and assessing its outcomes using both the technical and social sciences is evident in this paper.
See DOI
See Institutional Repository
Sutherland, C.; Reynaert, E.; Dhlamini, S.; Magwaza, F.; Lienert, J.; Riechmann, M. E.; Buthelezi, S.; Khumalo, D.; Morgenroth, E.; Udert, K. M.; Sindall, R. C. (2021) Socio-technical analysis of a sanitation innovation in a peri-urban household in Durban, South Africa, Science of the Total Environment, 755, 143284 (12 pp.), doi:10.1016/j.scitotenv.2020.143284, Institutional Repository

On-site wastewater reuse can improve global access to clean water, sanitation and hygiene. We developed a treatment system (aerated bioreactor, ultrafiltration membrane, granular activated carbon and electrolysis for chlorine disinfection) that recycles hand washing and toilet flush water.
Three prototypes were field-tested in non-sewered areas, one in Switzerland (hand washing) and two in South Africa (hand washing, toilet flushing), over periods of 63, 74 and 94 days, respectively.
We demonstrated that the system is able to recycle sufficient quantities of safe and appealing hand washing and toilet flush water for domestic or public use in real-life applications. Chemical contaminants were effectively removed from the used water in all prototypes. Removal efficiencies were 99.7% for the chemical oxygen demand (COD), 98.5% for total nitrogen (TN) and 99.9% for phosphate in a prototype treating hand washing water, and 99.8% for COD, 95.7% for TN and 89.6% for phosphate in a prototype treating toilet flush water. While this system allowed for true recycling for the same application, most on-site wastewater reuse systems downcycle the treated water, i.e., reuse it for an application requiring lower water quality. An analysis of 18 selected wastewater reuse specifications revealed that at best these guidelines are only partially applicable to innovative recycling systems as they are focused on the downcycling of water to the environment (e.g., use for irrigation). We believe that a paradigm shift is necessary and advocate for the implementation of risk-based (and thus end-use dependent) system performance targets to evaluate water treatment systems, which recycle and not only downcycle water.
See DOI
See Institutional Repository
Reynaert, E.; Greenwood, E. E.; Ndwandwe, B.; Riechmann, M. E.; Sindall, R. C.; Udert, K. M.; Morgenroth, E. (2020) Practical implementation of true on-site water recycling systems for hand washing and toilet flushing, Water Research X, 7, 100051 (13 pp.), doi:10.1016/j.wroa.2020.100051, Institutional Repository