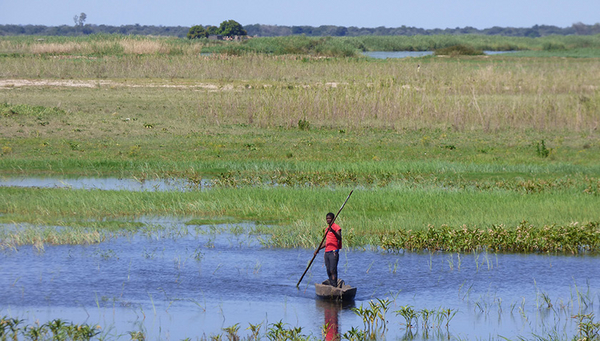 The Zambezi River Basin in southern Africa is a high-quality waterscape. But current rapid development threatens the waters of the Zambezi, particularly its tributaries. The challenge will be to ensure that mitigation measures keep up with population and economic growth to avoid degradation of water quality degradation.

The Zambezi and Kafue Rivers in southern Africa still carry very clean water today. Only below dams do they suffer from increased water temperatures, lack of oxygen and loss of sediments. Smaller tributaries, however, are showing signs of pollution. These are the results of four field campaigns conducted by the aquatic research institute Eawag in central and southern Zambia in 2018 and 2019 in collaboration with the ETH Zurich and the University of Zambia. The results were published today in the journal Environmental Science: Processes and Impacts.

Scott Winton, lead author of the study and postdoctoral researcher at Eawag and the ETH Zurich, warns of the consequences of future development, for the catchment area of the two rivers is changing rapidly. Population and cities are growing quickly, agriculture is spreading and intensifying, and hydropower plants are being built. In the following interview, Scott Winton reports on the most important findings of the field campaigns and where the challenges for the sustainable development of the Zambezi River Basin lie.

Scott Winton, how did you experience the water landscape? Were you surprised by the high water quality of the two main rivers Zambezi and Kafue?

Scott Winton: Yes, coming from the USA and living in Europe, where with few exceptions major rivers show obvious chemical signatures of human pollution, it was a big surprise to see this huge river in Africa, the Zambezi, and find it so clean. People drink the river water without any treatment. And when we brought samples back to the Eawag laboratories, the technicians were shocked. The river water seemed to be even cleaner than the highly purified water used for laboratory processes.

What kind of pollution did you find in the tributaries?

In small tributaries draining from more densely populated areas, we found elevated nutrients and ions such as sodium and chlorine – pollutants typical of urban wastewater. Close to some industrial agricultural plots we found a stream with very high nitrate concentrations, indicative of fertiliser leaching.

Cristian Teodoru and Elisa Calamita, co-authors of the study, on Lake Kariba, a reservoir of the zambezi.
(Photo: R. Scott Winton)

In the article, you assume that urbanisation, intensification of agriculture and the development of hydropower will further deteriorate water quality. What changes exactly do you expect?

Basically, we expect to find similar pollutants as mentioned before, but in higher concentrations. Water quality impacts are additive, so the more sources you have on your landscapes and along your rivers, the more pollutants you will find in surface waters. We should expect water quality to deteriorate in sync with development.

Will the situation deteriorate mainly in the tributaries or are the main rivers Zambezi and Kafue also threatened?

The immense size of the Zambezi and Kafue Rivers and their watersheds mean that any pollutants reaching these bodies become highly diluted by flows of hundreds or thousands of cubic metres per second. The big rivers are largely the sum of their tributaries, so it will take a lot of polluted tributaries before the big ones become compromised. A greater threat to the major rivers is probably damming, which can create thermal pollution and leave downstream waters without oxygen.

You also write that governments, managers and industry have the opportunity to mitigate water degradation. What measures do you recommend?

Each source has its own suite of mitigation options. For urban wastewater, it is mainly treatment plants and wetlands; for agriculture it is riparian buffers and wetlands; for dams, environmental flows and selective withdrawal systems. These practices are well known and in Zambia many of these approaches are already being implemented. The key to avoid water quality degradation will be to ensure that mitigation measures are able to scale with population and economic growth. This will be a challenge because the pace of growth is so rapid and there will be as is the case everywhere and always, pressure to cut short-term infrastructure costs and forego environmental protection.

The Zambezi River Basin in Southern Africa is undergoing rapid development and population growth. Agricultural intensification, urbanization and future development of hydropower dams will likely lead to a degradation of surface water quality, but there have been few formal assessments of where, how and why these changes impact specific water quality parameters based on in situ data spanning a large region. We sampled a large suite of biogeochemical water quality parameters at 14 locations in four field campaigns in central and southern Zambia in 2018 and 2019 to characterize seasonal changes in water quality in response to large hydropower dams and human landscape transformations. We find that the major rivers (Zambezi and Kafue) are very clean with extremely low concentrations of solutes, but suffer from thermal changes, hypoxia and loss of suspended sediment below dams. Smaller tributaries with a relatively large anthropogenic landcover footprint in their catchments show signs of pollution in the form of higher concentrations of nutrients and dissolved ions. We find significant relationships between crop and urban land cover metrics and selected water quality metrics (i.e. conductivity, phosphorus and nitrogen) across our data set. These results reflect a very high-quality waterscape exhibiting some hotspots of degradation associated with specific human activities. We anticipate that as agricultural intensification, urbanization and future hydropower development continue to accelerate in the basin, the number and extent of these hotspots of water quality degradation will grow in response. There is an opportunity for governments, managers and industry to mitigate water quality degradation via investment in sustainable infrastructure and practice, such as wastewater treatment, environmental dam operations, or riparian protection zones.
See DOI
See Institutional Repository
Winton, R. S.; Teodoru, C. R.; Calamita, E.; Kleinschroth, F.; Banda, K.; Nyambe, I.; Wehrli, B. (2021) Anthropogenic influences on Zambian water quality: hydropower and land-use change, Environmental Science: Processes and Impacts, 23(7), 981-994, doi:10.1039/d1em00006c, Institutional Repository
Created by Bärbel Zierl
Share with others: