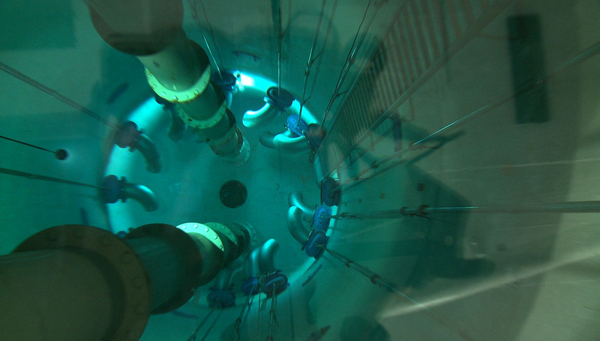 In the course of the last few decades, the oxygen concentration levels in aquifers in the Swiss Plateau have dropped irregularly. Results of the National Research Programme "Sustainable Water Management” (NRP 61) suggest that the irregular decrease might be related to various degrees of silting in watercourses.

A significant proportion of the water we use comes from aquifers that are fed by infiltration along watercourses. River water temperatures have been rising regularly for several decades. By analysing data from municipal pumping stations, the Eawag researchers Simon Figura, David Livingstone and Rolf Kipfer have observed that this trend also extends to groundwater, where the average temperature increase is 0.3 to 0.6°C every ten years.

The increase in groundwater temperature is probably having a negative impact on the concentration of dissolved oxygen in ground water by encouraging biological activity and therefore oxygen consumption. At the same time, it is reducing the solubility of the oxygen in the water.

A new analysis by the researchers now confirms that there is a trend towards lower levels of dissolved oxygen. As opposed to water temperatures, this decrease is not continuous but follows a sawtooth pattern: it is regularly interrupted by sudden increases that cannot be solely due to temperature.

By analysing the variations in water flow rate and the pumping volumes, the researchers have developed a new hypothesis: high river discharge and high pumping volumes lead to better river bed infiltration. This, in turn, leads to a swift increase in the oxygen concentration. However, it seems that this only happens after extreme spates that sweep away the silt on river beds. The spates thus clean the natural filter formed by river beds, which facilitates greater renewed infiltration and reoxygenation of the groundwater.

This hypothesis on the effects of the removal of riverbed silting is supported by field observations. During the 1970s, a layer of zebra mussels approximately five centimetres thick formed on the bed of the Rhine near to one of the pumping stations studied by the researchers. Several years later, divers noticed that the layer was no longer there. For this period, measurements indicate a clear increase in dissolved oxygen concentrations in aquifers.

What does the future hold?

Climate forecasts for the 21st century predict an increase in extreme weather. Scorching summers such as that experienced in 2003 are likely to become more frequent. Some aquifers became anoxic in 2003. One of the major consequences of this was the solubilisation of iron and manganese particles, which precipitated out of the water in pumping stations, where they negatively affected the operation of the pumping wells.

However, there should also be more spates to clean river beds and encourage groundwater oxygenation. The researchers thus expect the slow decline in oxygen levels to continue, but believe that the spates as well as high discharge and high pumping volumes will prevent continuous aquifer anoxia.

David Livingstone, Simon Figura and a collaborator of the Winterthur water supply discussing in a groundwater pumping well.
© NFP61