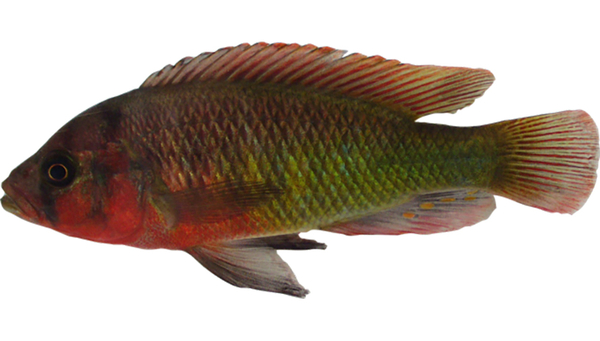 Around 500 different cichlid species are found in Lake Victoria. According to a study by scientists at Eawag and Bern University, whether closely related species can persist within the same area depends on the effect sizes of individual genes underlying key mate-choice traits.

In several eastern African lakes, an immense variety of cichlid species evolved within just a few thousand years. The various species occupy many different ecological niches. While up to 50 cichlid species may co-occur in the same area, this requires a high degree of reproductive isolation; in other words, individuals of a given species (for the most part) only mate with members of their own species. Sometimes, however, closely related species living alongside one another will interbreed, leading to the exchange of genes. If such “gene flow” occurs frequently, species may be expected to fuse again. This has in fact occasionally been observed in Lake Victoria cichlids. But in many other cases distinct species persist despite some gene flow. How is this to be explained?

To address this question, a group led by doctoral student Anna Feller and evolutionary biologist Ole Seehausen of Eawag and Bern University studied several hundred laboratory-bred cichlid hybrids. The hybrids came from two different crossings: one species pair co-occurs in Lake Victoria despite occasional gene flow, while the other pair is non-sympatric (i.e. does not co‑occur). In the hybrid descendants, the scientists compared those areas of the genome (loci) which underlie the expression of a key reproductive isolation trait – male nuptial coloration. As is known from previous field and laboratory studies, females show a strong preference for the colour motif of their own species.

Anna Feller says: “We found a clear difference in the distribution of the genes across the genome, and in their effects on the phenotype (appearance) of the cichlid.” In the sympatric species, nuptial coloration is determined by just a few loci, whereas in the non-sympatric species a large number of loci appear to be involved. Feller comments: “When gene flow takes place, recombination presumably occurs less frequently if a few genes have large effects on coloration.” The colour motif is thus more likely to be retained. “In contrast, with a large number of small-effect loci, recombination could lead more rapidly to the loss of the original combinations.” The researchers conclude that the genetic architecture of traits important for speciation may help determine whether new species can evolve in the absence of geographical isolation and persist alongside one another despite occasional gene flow.

One hallmark of the East African cichlid radiations is the rapid evolution of reproductive isolation that is robust to full sympatry of many closely related species. Theory predicts that species persistence and speciation in sympatry with gene flow are facilitated if loci of large effect or physical linkage (or pleiotropy) underlie traits involved in reproductive isolation. Here, we investigate the genetic architecture of a key trait involved in behavioural isolation, male nuptial coloration, by crossing two sister species pairs of Lake Victoria cichlids of the genus Pundamilia and mapping nuptial coloration in the F2 hybrids. One is a young sympatric species pair, representative of an axis of colour motif differentiation, red-dorsum versus blue, that is highly recurrent in closely related sympatric species. The other is a species pair representative of colour motifs, red-chest versus blue, that are common in allopatric but uncommon in sympatric closely related species. We find significant quantitative trait loci (QTLs) with moderate to large effects (some overlapping) for red and yellow in the sympatric red-dorsum × blue cross, whereas we find no significant QTLs in the non-sympatric red-chest × blue cross. These findings are consistent with theory predicting that large effect loci or linkage/pleiotropy underlying mating trait differentiation could facilitate speciation and species persistence with gene flow in sympatry.
See DOI
See Institutional Repository
Feller, A. F.; Haesler, M. P.; Peichel, C. L.; Seehausen, O. (2020) Genetic architecture of a key reproductive isolation trait differs between sympatric and non-sympatric sister species of Lake Victoria cichlids, Proceedings of the Royal Society B: Biological Sciences, 287(1924), 20200270 (10 pp.), doi:10.1098/rspb.2020.0270, Institutional Repository
Created by Felicitas Erzinger
Share with others: