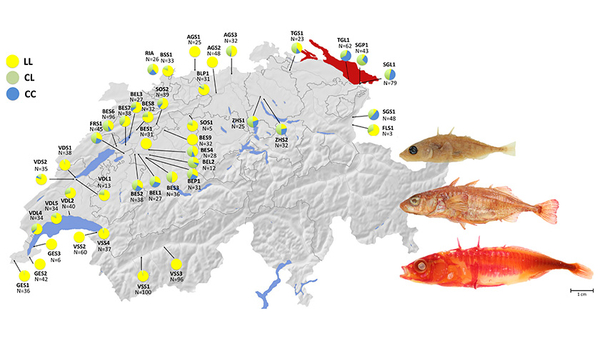 In Lake Constance, sticklebacks are occupying increasingly varied habitat types – in recent years even including the open and deep waters of the lake. In an Eawag review undertaken as part of the “SeeWandel” project, these uniquely diverse ecological adaptations are explained in terms of renewed contact between three stickleback lineages – including one originating from the Baltic region, whose genetic material is as yet rarely observed in other Swiss lakes.

Before 1900, to the north of the Alps in Switzerland, only one stickleback population – near Basel – is historically documented. In the early 20th century, the biologist Paul Steinmann was concerned that the species might even disappear altogether, as – since the first aquarium boom in Europe – these colourful little fish had been caught on a massive scale and sold as pets. Today, however, sticklebacks are found in many Swiss streams and in most of the large lakes.

But in contrast to Lake Geneva, where sticklebacks only proliferated during the period of eutrophication prior to the construction of wastewater treatment plants, and where populations today – as in the lakes on the foothills of the Jura Mountains – live relatively inconspicuously in the littoral zone and in some tributaries, sticklebacks in Lake Constance have recently become invasive. Since 2013, large numbers of these small spiny fish have been caught as by-catch in the nets of professional fishermen. They have also colonised almost all habitat types: as well as populations living exclusively in streams or along the shoreline, some are found in the open water, recently at depths of up to 47 metres. Other populations migrate from the lake to streams, where they spawn at the same time as stream‑resident sticklebacks, but still remain genetically distinct.

Cameron Hudson, an evolutionary and fish biologist at Eawag, says: “Stream and lake stickleback ecotypes are known to occur in many regions worldwide.” But in the past, examples of these small creatures venturing into the open water of a lake full of large predators were rarely reported – with only isolated cases of stickleback invasions in the Great Lakes of North America. In addition, lake-to-stream migration for reproduction has so far only been observed in Lake Constance sticklebacks, although species which migrate between marine and freshwater habitats are known to exist in Europe, North America and Asia.

The appearance of sticklebacks in Lake Constance varies widely: these are both adult females – from the open water of the lake (top) and from a small tributary (bottom).
(Eawag, Cameron Hudson)

But how are these unique developments to be explained? “Lake Constance is a complex, dynamic system,” says Hudson, citing rapid changes in nutrient inputs, climate change and the many new, sometimes invasive species, such as ruffe or zebra and quagga mussels. Ecosystems are, however, also exposed to similar pressures in lakes where sticklebacks have not become invasive.

In a review published in Frontiers in Ecology and Evolution (open access), Hudson and his co‑authors from Eawag and the Universities of Bern and Basel attribute the invasiveness of the stickleback in Lake Constance to genetic factors, providing historical, morphological and ecological as well as genomic data to support their explanation.

Worldwide, over millions of years, marine sticklebacks have repeatedly colonised freshwater lakes and rivers. Populations in the Rhine and other European rivers are relatively young, resulting from migrations which only occurred after the last ice age. But sticklebacks in Swiss lakes are the descendants of aquarium fish, which were frequently released into the wild in the nineteenth century, often deriving from originally widely separated populations.

Established in Lake Geneva and the lakes of the Jura foothills were thus, in particular, sticklebacks from the Rhône. In Eastern Switzerland and Southern Germany, sticklebacks were documented first in tributaries of Lake Constance and later also in the lake itself. Here, during the period of eutrophication from the 1960s onwards, population explosions were observed, but also rapid collapses.

As demonstrated by Eawag studies published in 2019, the genetic material of Lake Constance sticklebacks derives from three lineages: from the Rhine, from the Rhône and – unlike elsewhere in Switzerland – predominantly from an East European lineage which, from the Baltic Sea, only colonised Polish and Baltic rivers after the last ice age.

This unique gene pool was utilised by Lake Constance sticklebacks for adaptations to a wide variety of habitat types. Thus – in contrast to other freshwater sticklebacks – the East European sticklebacks and their descendants in Lake Constance have lost neither their bony lateral plates nor their long spines; this means that they are better protected against the numerous predatory fish and piscivorous birds.

These well-armoured and also particularly large lake sticklebacks prey on copepods and other nutrient-rich zooplankton, as was shown by analysis of the stomach contents from 253 individuals; in contrast, stream and littoral sticklebacks mainly feed on insect larvae and other macroinvertebrates, which, though less nutrient-rich, are a reliable food source.

The biologists have already observed genetic fixation of various specialisations – the beginnings of the development of new species.

Genetic analyses of almost 1600 sticklebacks across Switzerland reveal differences between the populations in the various lakes: put simply, yellow indicates alleles for low-plated and blue for fully plated phenotypes, while green indicates mixed forms. More details can be found in the original publication and in Supplementary Table 2 (adapted from Lucek et al. 2010).

How do species become invasive?

The study also indicates where further research is required. For example, additional stomach content analyses are needed for different seasons. Also unresolved is the question whether populations may ultimately be controlled by parasites or predators, such as cormorants, lake trout or perch.

In particular, sticklebacks in other Swiss lakes are now also being observed for signs of invasiveness, since the genetic material of Lake Constance sticklebacks is currently spreading further west, as was shown by Eawag scientists some years ago. From an ecological perspective, this prospect is a matter of concern for Cameron Hudson: “But it also offers a unique opportunity to observe these processes and to gain a better understanding of what makes species become invasive.”

Translation: In rivers and lakes a little fish can be found that is named after its sharp spines. I perceive there to be two kinds. The first is larger, protected on the back by only three spines, three in the belly, joined, such as are seen on the seed of a type of Amaranth that the French call Espinar [viroflay spinach], which is the reason why the small fish is called Epinoche or Epinarde, in Germany the Stachelfisch, and in Italy the Stratzarigla. The sharp and strong spines are raised in alarm, for example to protect themselves from injury. Except for the spines, they resemble a small, scale-less Perch. In rivers and lakes sometimes they are so numerous, that many think they are the origin of the other fish, or at least their prey. When ponds are emptied or dried, many of these fish are left to be collected by the poor. The other species has six (eff. nine) spines on its back. I saw this little fish in the river Nar, whence it enters the Tiber. The locals are eating the fish there. Those who say that stickleback fish are a species of Galeorum [cat sharks] are mistaken. What can these small fish and the [catsharks] have in common?

Threespine stickleback in Lake Constance: the ecology and genomic substrate of a recent invasion

Invasive species can be powerful models for studying contemporary evolution in natural environments. As invading organisms often encounter new habitats during colonization, they will experience novel selection pressures. Threespine stickleback (Gasterosteus aculeatus complex) have recently colonized large parts of Switzerland and are invasive in Lake Constance. Introduced to several watersheds roughly 150 years ago, they spread across the Swiss Plateau (400–800 m a.s.l.), bringing three divergent hitherto allopatric lineages into secondary contact. As stickleback have colonized a variety of different habitat types during this recent range expansion, the Swiss system is a useful model for studying contemporary evolution with and without secondary contact. For example, in the Lake Constance region there has been rapid phenotypic and genetic divergence between a lake population and some stream populations. There is considerable phenotypic variation within the lake population, with individuals foraging in and occupying littoral, offshore pelagic, and profundal waters, the latter of which is a very unusual habitat for stickleback. Furthermore, adults from the lake population can reach up to three times the size of adults from the surrounding stream populations, and are large by comparison to populations globally. Here, we review the historical origins of the threespine stickleback in Switzerland, and the ecomorphological variation and genomic basis of its invasion in Lake Constance. We also outline the potential ecological impacts of this invasion, and highlight the interest for contemporary evolution studies.
See DOI
See Institutional Repository
Hudson, C. M.; Lucek, K.; Marques, D. A.; Alexander, T. J.; Moosmann, M.; Spaak, P.; Seehausen, O.; Matthews, B. (2021) Threespine stickleback in Lake Constance: the ecology and genomic substrate of a recent invasion, Frontiers in Ecology and Evolution, 8, 611672 (22 pp.), doi:10.3389/fevo.2020.611672, Institutional Repository

SeeWandel
The departments of Fish Ecology & Evolution at Eawag and the University of Bern have been studying sticklebacks in Lake Constance since 2005. The latest study was co-financed by the SeeWandel (Lake transformation) project. This interdisciplinary project – involving seven research institutes from Germany, Austria, Liechtenstein and Switzerland – is investigating the impacts of the decline in nutrients, climate change and non-native species on the Lake Constance ecosystem. In the stickleback study, a group of aquatic ecologists and fish and evolutionary biologists review the current state of knowledge on sticklebacks in Lake Constance in the light of international research. Reference is made to sources dating back to the sixteenth century, which provide a good picture of the historical distribution of various types of stickleback in freshwater lakes and rivers of Western and Central Europe. As well as offering an overview for anyone interested in the spread of sticklebacks in Swiss lakes, the study represents a contribution to research on invasive species. >> www.seewandel.org