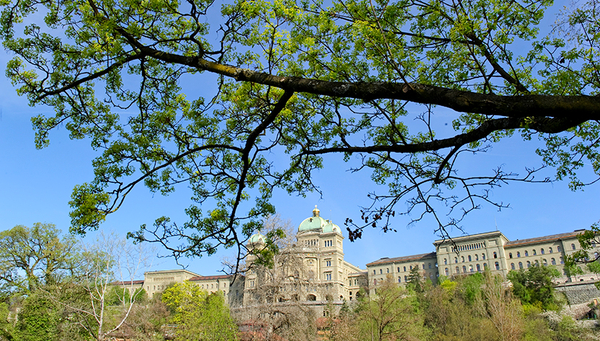 Whether a hydroelectric power plant is built, a pesticide is banned or a moor is placed under protection – a wide variety of political decisions have an impact on biodiversity. But does biodiversity play any role at all in such decisions? Researchers at Eawag and WSL have investigated this question and examined Swiss policy over the past 20 years.

Biodiversity is being increasingly talked about in the media and in public. But are these words also followed by deeds? Is there a biodiversity policy that takes the complexity of the issue into account? “These are important questions, because in order to be able to protect biodiversity, it has to be considered in many different areas, from environmental and agricultural policy to transport and energy policy, and taken into account in legislation,” says Ueli Reber, a political scientist at the aquatic research institute Eawag. That is why he and colleagues from Eawag and the Swiss Federal Institute for Forest, Snow and Landscape Research (WSL) analysed federal policy between 1999 and 2018. “We wanted to elucidate the status of biodiversity in politics, how attention to it has developed and in which areas there are still blind spots.”

To this end, the researchers collected around 440,000 documents – from the transcripts of sessions of the National Council and Council of States to legislative texts and federal court rulings. Using computer-assisted content analysis, they investigated whether the texts relate to biodiversity. The problem is that the word biodiversity is not always written where biodiversity is involved. “In the transcript of one meeting, for example, there was talk of moorland protection. The word biodiversity did not appear in it, yet this discussion was clearly about the conservation of biodiversity,” says Reber.

So the biggest challenge was first of all to find out which topics implicitly involve biodiversity. To this end, the researchers conducted surveys and compiled an extensive list of around 130 biodiversity-relevant keywords and combinations of terms from “species diversity” and “fish ladders” to “moor,” “wolf” and “migratory birds”, to name but a few. “We had to clean up this list several times to improve the hit rate. The word wolf, for example, occurred both in reference to the animal and as a surname. Of course, we were only interested in the texts in which the animal was meant.” They created such a list not only for German, but also for French and Italian.

The topics change, the importance does not

The researchers identified around 7,000 biodiversity-related documents, which they then examined more closely. “If we look at the development over time, we see that the political interest in biodiversity has remained constant over the last 20 years. But there have been thematic shifts.” Some topics, such as protected areas, have moved into the background, while others, such as wolves, have recently been the subject of more and more discussion.

The researchers were also interested in the role biodiversity plays in the different stages of the political process. “If measures for the protection of biodiversity are discussed in Parliament, but these do not find their way into the laws, you don’t get anywhere,” explains Reber. “In general, there is less mention of biodiversity in the legal texts than in the drafting stage.” It is not so easy to say why this is the case. “One reason could be that some decisions are primarily implemented by the cantons, but we have only analysed policy at the federal level.” There are differences not only in terms of frequency, but also in terms of content. “We have found that in legal texts, biodiversity is mainly mentioned in the regulation of pesticides. The courts, on the other hand, are particularly concerned with the issue in disputes on construction projects and protected areas.” In the drafting of laws by Parliament and the Federal Council, the topics are comparatively more diverse. In this stage, for example, the management of wildlife, genetically modified organisms, the protection of aquatic habitats, environmental foreign policy and agricultural subsidies are in the foreground.

As a third aspect, the researchers investigated in which policy sectors biodiversity issues were addressed. “Only a few sectors deal with it, such as environmental and agricultural policy,” explains Reber. In many other relevant areas, such as spatial planning, traffic and transport, energy and economic policy or health policy, biodiversity has hardly been an issue so far. “Only when these different policy areas and contexts recognise how important biodiversity is, can conservation of biodiversity succeed. With our results, we can show where the blind spots and deficits are, and where there is a need to catch up.”

However, the researchers are confident about one development: over time, the term “biodiversity” has been used more and more frequently. In the drafting stage, “biodiversity” is now explicitly mentioned in about a third of the cases, even if the contexts are different. “This label helps make the broad spectrum of biodiversity-related issues comprehensible, bundle the various measures and bring the different actors together,” says Reber. A coordinated political programme can thus emerge from a pile of loose topics. This should give biodiversity policy more impact in the future.

The project "How has Swiss biodiversity policy been performing over the last 20 yrs?" contributes to the Blue Green Biodiversity Research Initiative - an Eawag-WSL collaboration that focuses on biodiversity at the interface of aquatic and terrestrial ecosystems. The initiative is funded by the ETH Board.