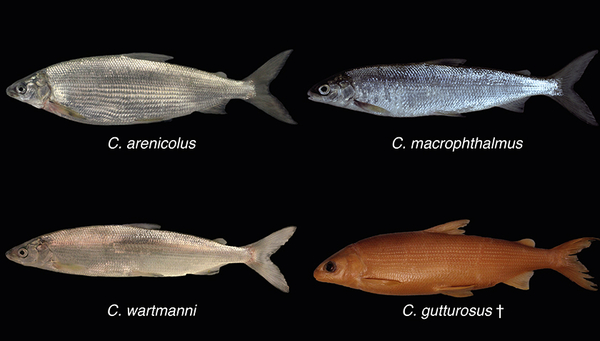 Nearly a hundred year old tissue samples from Lake Constance have enabled Eawag researchers to compare genetic material of an extinct whitefish species with that of extant co-occurring species. Their investigation showed that fragments of the genome of the extinct species have survived in today’s species. This could potentially facilitate the recolonization of the currently not occupied deep-water habitat.

The carefully labelled paper bags look fairly plain, but they are actually a piece of luck for research. They contain historical scale samples, collected on a regular basis from all Lake Constance whitefish species by fisheries authorities for more than 100 years to determine age and growth rates. David Frei, from Eawag’s Fish Ecology and Evolution Department, was able to extract genetic material from these scales collected from whitefish that lived in Lake Constance around 90 years ago. This was long before the onset of a period of anthropogenic eutrophication in the 1950s, during which one of the four native whitefish species became extinct. By comparing the genomes of the historical samples with those of the species still in existence today, David Frei and his research colleagues were able to better understand certain details of the extinction process and their effect on the genomes of the surviving species. In the light of rapidly declining habitats and species diversity, this can provide valuable insights into how biodiversity can be conserved. The results of the study, largely carried out as part of the “SeeWandel” project (see box), have just been published in the journal Nature Ecology & Evolution.

The researchers sequenced the genome of the extinct whitefish species Coregonus gutturosus from historical scale samples, as well as historical and contemporary samples of the three surviving Lake Constance whitefish species. All four species have emerged since the last ice age and are endemic to Lake Constance. All across Switzerland, there were more than 30 endemic whitefish species in the large pre-alpine Swiss lakes. During the eutrophication period of the lakes in the last century, however, this diversity decreased dramatically. Around a third of the Alpine whitefish species went extinct within just a few decades. Species that had adapted to deep water, such as C. gutturosus, were most affected. Because of the anthropogenic eutrophication and the associated oxygen depletion, the populations became continuously smaller and, at the same time, successful reproduction was only possible at shallower depths, where co-occurring species usually spawned. In consequence, the species started to admix with co-occurring relatives. This process is called speciation reversal, because species that had once diverged genetically in consequence of adaptation to different ecological niches can lose their differentiation through genetic admixture induced by environmental change, such as anthropogenic lake eutrophication. Speciation reversal contributes to extinction, as the already reduced population can become completely replaced by hybrids and thus merges with the predominant species.

Setting nets for collecting samples of present-day whitefish species, which will be used to compare their genetic make-up with the historical samples. (Photo: David Frei)

The researchers were interested in the genomic consequences of speciation reversal for the surviving Lake Constance whitefish species. This type of study has rarely been feasible in the past, as genetic information on historical population is often missing. By comparing historical and contemporary whitefish genomes, the researchers found that genetic differences between the species had strongly decreased after the eutrophication period. Moreover, as a result of the genetic admixture between whitefish species that took place during the period of eutrophication, the genomes of all three surviving whitefish species in Lake Constance were found to contain genetic fragments of the extinct species. The researchers hypothesise that these transferred fragments that had evolved in the extinct species before eutrophication may include genetic variants that allowed C. gutturosus to occupy deep-water habitats. In turn, these transferred genetic fragments may help the present-day species to establish themselves in deep-water habitats in the future.

Each one of the four whitefish species contains genetic variation from the other species. The samples of present-day whitefish (see “Post”) are strongly genetically admixed compared to the historical samples, which were collected before the start of the eutrophication peridod of Lake Constance (see “Pre”).

Thanks to the joint water-conservation efforts of the lake’s bordering countries, the nutrient content in Lake Constance has been significantly reduced since the 1980s, and hence, deep water habitats are again accessible for whitefish. A follow-up project is currently underway to study whether the transferred genome fragments do in fact play a role in this regard. The researchers are investigating whether more or different genetic variants originating from the extinct species can be found in the genomes of whitefish that currently live in deeper waters. If the researchers’ hypothesis proves correct that gene exchange occurring in the process of species extinction increases the adaptive potential of the surviving species to occupy new or altered habitats, this would demand a rethink of the current approaches of biodiversity conservation. The protection of hybrid populations would thus become more important than sometimes still assumed.

The interdisciplinary research project “SeeWandel: Life in Lake Constance, the past, present and future”, is examining questions relating to the resilience of the lake’s ecosystem, and is investigating the influence of reduced nutrient content, climate change, invasive organisms and other stress factors. This study is one of 13 projects involving seven research institutes in Germany, Switzerland, Austria and Liechtenstein.