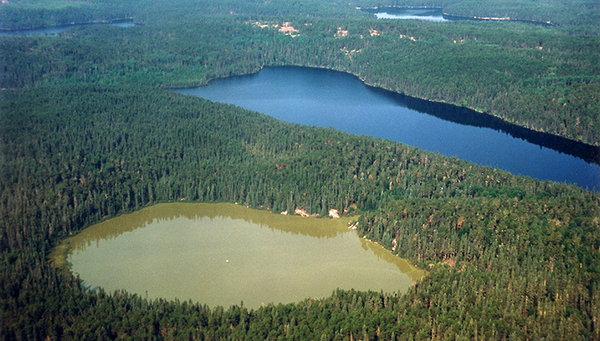 When ecosystems tip abruptly out of balance, this can be catastrophic for humans and for biodiversity. Astonishingly little is known about the role of evolution in such processes. A research team including Eawag scientists has now published approaches to investigating such complex questions in the journal “Nature Ecology & Evolution”.

Since the 20th century, observations have been made all over the world of shallow lakes which remain clear for years despite increasing nutrient inputs, but then abruptly transition to being turbid – and remain in this state for years beyond when nutrient inputs are reduced.

“Shallow lakes are a textbook example of tipping points in ecosystems”, says Blake Matthews from the Department of Fish Ecology and Evolution at the aquatic research institute Eawag. Aquatic plants rooted in the lake floor (Macrophytes) take up large quantities of nutrients for their growth. In doing so, they hinder the growth of algae (phytoplankton). However, once the nutrient concentration exceeds the capacity of the aquatic plants, the algae get the upper hand; the water becomes turbid and a vicious circle ensues: the aquatic plants have too little light, so they die and do not use any nutrients; the algae proliferate exponentially, and the whole system quickly tips into a constantly turbid and eutrophic condition. Many of the original lake inhabitants are no longer viable, and the evolution of the surviving populations is steered in a totally new direction. For this reason, even after reduction of the nutrient concentration to the original quantity, the new condition is at best akin to the original, but not the same.

Where changes are no longer slow and gradual, but lead abruptly to a completely different condition, biologists speak of “tipping point ecosystems”. In contrast to a light switch, tipping points in a complex natural system mean that the original system is more difficult to restore.

Ecologists are extensively researching such tipping points as increasing numbers of systems essential to life come under threat from human activities – from overfishing in the ocean to eroded soil and coral reefs that are victims of climate change.

It is likely that changes in heritable traits of plants, animals and other organisms can influence the tipping points and indeed the recovery of a system. Many aquatic plants with rapid vertical growth, for instance, can adjust to the increase in turbidity because their genes allow variable expressions of this particular characteristic; they reach the uppermost and lightest layer of water in time and can thus further clarify the water and delay the tipping point. The opposite is the case with overfished schools of cod: evolution appears to have sped up their collapse to a point where they could no longer recover. The necessary genetic diversity has been filtered out of their genes as a result of the one-sided and over-intensive fishing pressure.

“There is much that we do not yet understand,”, says Blake Matthews. Along with the other authors of the study from France, Canada, the UK, Sweden, The Netherlands and Belgium who are working in the field of sustainable development, evolutionary biology and ecosystem stability, the Eawag researcher is calling for more extensive investigation into the role of evolution in the stabilization and destabilisation of ecosystems.

“It is certainly very difficult to investigate whole ecosystems,” says Matthews. “They are usually too big and too complex.” The recent article calls for the development of models with which one can identify tipping points and carry out specific investigations into how ecosystems can be better protected, or their recovery facilitated. Controlled experiments for this purpose, say the scientists, can be carried out either in the laboratory or in experimental ponds like Eawag’s “mesocosms” in Dübendorf.

The experimental ponds at Eawag in Dübendorf (ZH) offer ideal conditions for investigating the interaction of evolutionary processes and the tipping points of ecosystems.
(Photo: Eawag, Peter Penicka)

The study was supported by a grant from the Swiss National Science Foundation: 31003A_175614.