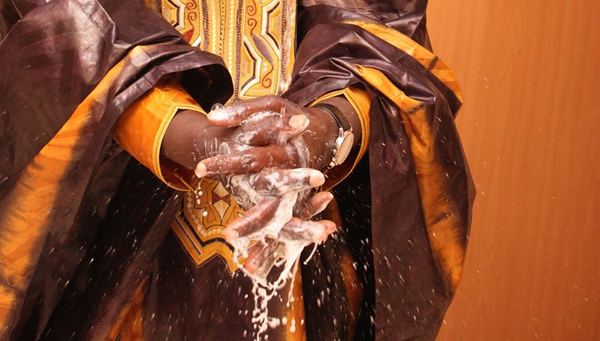 Ebola is a deadly viral infection that has so far mainly been present in Central and West Africa. Many people in those regions are either unfamiliar with the disease, do not believe in it, or don’t know how to prevent infection. For this reason, UNICEF was active in The Gambia, West Africa, among other places, between 2014 and 2016, running information campaigns on how to prevent the spread of Ebola.

At the time, although neighbouring countries were afflicted with the virus, The Gambia was Ebola-free, and has remained so to date. The charity focussed on raising awareness among the local population and on changing habits – including regular handwashing with soap, calling the Ebola hotline when suspected cases of infection arose, and not touching those who were ill. In parallel with this campaign, behavioural psychologists at Eawag conducted a field study on how effective each of the interventions was.

“The psychological elements of such campaigns are very often overlooked”, says Eawag psychologist and behavioural biologist Hans Joachim Mosler. According to him, the behaviour of humans is a combination of psychological influences. In the case of Ebola prevention, these include observing what others are doing; the perceived certainty that a particular behaviour will prevent a disease, or the commitment to behaving in this way oneself.

The results of the field study indicate that three intervention measures in particular contributed to the desired changes in behaviour: home visits, posters in public places, and information sheets. Handing out hygiene kits that contained soap and a flyer, on the other hand, were ineffective — in other words, they did not lead to increased handwashing. “Clearly, this intervention did not have any psychological influence that could have led to a change in behaviour”, says Hans Joachim Mosler. The findings from this study are important for future outbreaks of Ebola, he says, as well as for other epidemics.

The outbreak of the Ebola virus disease (EVD) from 2014 to 2016 is over. However, several outbreaks of contagious diseases have already arisen and will recur. This paper aims to evaluate the effectiveness of EVD prevention promotions in the Gambia and to assess the psychosocial factors that steer three behaviors: handwashing with soap, calling the Ebola Hotline, and not touching a person who might be suffering from EVD. In 2015, data were gathered from 498 primary care providers. The questionnaire was based on psychosocial factors from the risks, attitudes, norms, abilities, and self-regulation (RANAS) model. Three promotional activities were significantly associated with psychosocial factors of handwashing and, thus, with increased handwashing behavior: the home visit, posters, and info sheets. Norm factors, especially the perception of what other people do, had a great impact on handwashing with soap and on calling the Ebola Hotline. The perceived certainty that a behavior will prevent a disease was a predictor for all three protection behaviors. Commitment to the behavior emerged as especially relevant for the intention to call the Ebola Hotline and for not touching a person who might be suffering from EVD. Health behavior change programs should rely on evidence to target the right psychosocial factors and to maximize their effects on prevention behaviors, especially in emergency contexts.
See DOI
See Institutional Repository
Gamma, A. E.; Slekiene, J.; Mosler, H.-J. (2019) The impact of various promotional activities on Ebola prevention behaviors and psychosocial factors predicting Ebola prevention behaviors in the Gambia evaluation of Ebola prevention promotions, International Journal of Environmental Research and Public Health, 16(11), 2020 (18 pp.), doi:10.3390/ijerph16112020, Institutional Repository
Created by Stephanie Schnydrig
Share with others: