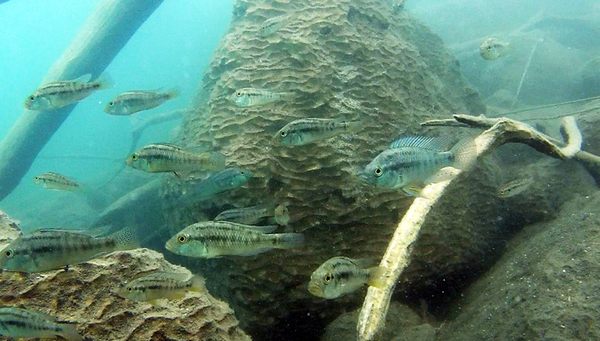 Cichlids belong to one of the largest fish families, with new species emerging all the time. These colourful, shimmering fish evolve so fast that Eawag researchers have now been able to practically observe them in the process of their evolution.

Within the space of several thousand years, one cichlid can evolve into hundreds of different species. These are the new findings of investigations in Victoria Lake, in Africa, where over 500 different cichlid species have emerged over the past 15,000 years. Now, for the first time ever, fish ecologists at Eawag have been able to observe the onset of such speciation – or adaptive radiation, as it is known – almost in real time. This unusual situation has been playing out in a crater lake in Tanzania, where cichlids of the genus Astatotilapia were introduced by humans around 50 years ago. The astounding thing is that, today, only a few decades later, the fish have already split into numerous different specialised forms.

On the basis of stomach analyses and stable isotopes, the researchers discovered that some of the cichlids being investigated were predominantly vegetarian, while others fed mostly on small fry or fish eggs. The fish also live at different depths and have different breeding colours. Admittedly, a general analysis of the situation indicates that we are not yet looking at actual individual species, as the genetic material is still too similar. The researchers estimate that in order for completely new species to evolve, it would take another few decades or even centuries.

Ole Seehausen, Head of the Department of Fish Ecology and Evolution, provides more in-depth insights into the cichlid research in Lake Chala in a

Lake Chala is a crater lake situated on the border between the African countries of Tanzania and Kenya.
(Photo: Florian N. Moser)

Adaptive radiation research typically relies on the study of evolution in retrospective, leaving the predictive value of the concept hard to evaluate. Several radiations, including the cichlid fishes in the East African Great Lakes, have been studied extensively, yet no study has investigated the onset of the intraspecific processes of niche expansion and differentiation shortly after colonization of an adaptive zone by cichlids. Haplochromine cichlids of one of the two lineages that seeded the Lake Victoria radiation recently arrived in Lake Chala, a lake perfectly suited for within-lake cichlid speciation. Here, we infer the colonization and demographic history, quantify phenotypic, ecological and genomic diversity and diversification, and investigate the selection regime to ask if the population shows signs of diversification resembling the onset of adaptive radiation. We find that since their arrival in the lake, haplochromines have colonized a wide range of depth habitats associated with ecological and morphological expansion and the beginning of phenotypic differentiation and potentially nascent speciation, consistent with the very early onset of an adaptive radiation process. Moreover, we demonstrate evidence of rugged phenotypic fitness surfaces, indicating that current ecological selection may contribute to the phenotypic diversification.
See DOI
See Institutional Repository
Moser, F. N.; van Rijssel, J. C.; Mwaiko, S.; Meier, J. I.; Ngatunga, B.; Seehausen, O. (2018) The onset of ecological diversification 50 years after colonization of a crater lake by haplochromine cichlid fishes, Proceedings of the Royal Society B: Biological Sciences, 285(1884), 20180171 (19 pp.), doi:10.1098/rspb.2018.0171, Institutional Repository
Created by Stephanie Schnydrig
Share with others: