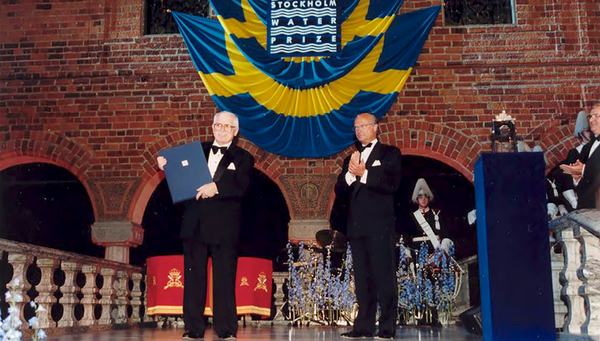 A new special publication is dedicated to the American scientist Jim Morgan, whose work in the field of aquatic chemistry also left its mark on Eawag.

“He was a great friend of Eawag,” says Janet Hering, Director of the aquatic research institute Eawag. James (Jim) Morgan was an American environmental scientist and engineer who died in 2020 at the age of 88. The current issue of the scientific journal “Environmental Science & Technology” (ES&T), of which Morgan was the founding editor and first editor-in-chief, is dedicated to Morgan’s intellectual legacy. Hering contributed significantly to the special publication and also wrote the editorial.

Hering’s main professional interaction with Morgan was when they both worked at the California Institute of Technology (Caltech) in Pasadena, USA, from 1996 to 2000. Looking back, she remarks: “Jim was always very generous with his time and supportive of his younger colleagues. I benefited from him as a mentor. He was at heart an educator.” In 1970, the textbook Aquatic Chemistry was published, which Morgan co-authored with Werner Stumm, who was director of Eawag from 1970 to 1992. The book became a widely cited standard work and was mentioned when Morgan and Stumm were awarded the Stockholm Water Prize in 1999.

Morgan completed his doctorate in wastewater treatment with Werner Stumm at Harvard University in the 1960s. The two stayed in touch when Stumm moved to Eawag in 1970. “The first time I met Jim was at Eawag, when we both took part in a workshop on aquatic chemical kinetics in 1989. I was a postdoc with Werner Stumm at the time,” recalls Hering. The friendship between Stumm and Morgan also left its mark on Eawag.

Participants in a workshop on aquatic chemical kinetics held at Eawag in 1989: Jim Morgan, Werner Stumm and current Eawag Director Janet Hering were among the participants.
(Photo: Eawag)

Interestingly, the first non-US office of ES&T was also located at Eawag from 2000 to 2007, initiated by the then director Alexander Zehnder. Even today, two Eawag scientists are on the editorial advisory board of the journal.

The articles in the special issue are available free of charge to all interested parties. Eawag finances open access together with the ACS publishing house. Read the special issue “Tribute to James J. Morgan”.