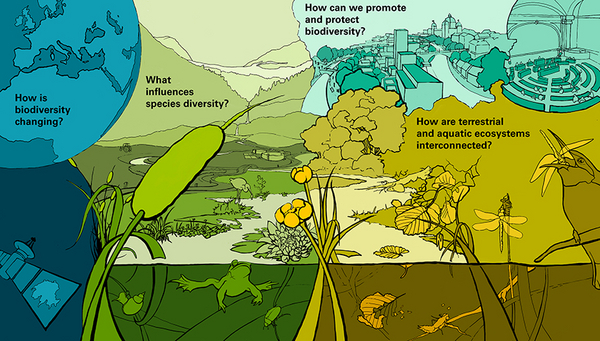 It makes sense to study land and water habitats together, according to the initial findings of the Blue-Green Biodiversity initiative.

Biodiversity is now declining at a rate unprecedented in human history, from the local to the global level, threatening not least human well-being. Rapid action is needed, which in turn requires a good understanding of biodiversity. However, a stark division between disciplines and ecosystems in ecological research is hampering holistic solutions, argue the authors of the first synthesis article to emerge from the Blue-Green Biodiversity (BGB) research initiative. As a result, analyses and measures are often confined to individual habitats. To address this problem, the ETH Board launched the BGB initiative as a way of forging closer ties between research into terrestrial and aquatic biodiversity.

In the first phase of the initiative in 2020, researchers from the Swiss Federal Institute for Forest, Snow and Landscape Research (WSL) and the Swiss Federal Institute of Aquatic Science and Technology (Eawag) joined forces to carry out cross-disciplinary projects. This allowed them to gain insights into the connections between terrestrial and aquatic ecosystems and identify how practitioners could benefit from an integrated approach. The first synthesis article presents three examples of this.

Amphibians, for example, live in water during the larval stage, while as adults they spend most of their time in land habitats. Creating new ponds will therefore only be successful if they are connected to the surrounding land and not separated by obstacles such as roads. Food webs also often straddle blue-green borders, as the second example shows. During the breeding season, songbirds often feed their young aquatic insects, which are more nutritious than those found on land. But climate change means that breeding seasons are becoming increasingly out of sync with insect supply, which could threaten the rearing of young. In order to detect such indirect effects, aquatic and terrestrial habitats have to be considered together.

The third example highlights which policy areas have started to address the issue of biodiversity and which have yet to do so. While there is an awareness of biodiversity issues in environmental and agricultural policy, such awareness is scarcely present in economic, energy or spatial planning policy. This is revealed by the patterns of use of the term 'biodiversity' in legislative discussions in the Swiss Parliament and Federal Council.

The authors of the article emphasise that the patterns and causes of changes in biodiversity can often only be uncovered and practically addressed by considering land and water habitats together. The BGB joint research initiative is working to break down barriers between research areas.