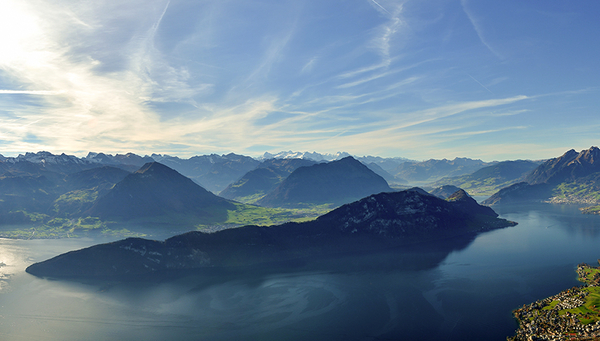 A high fraction of the endemic biodiversity of the Alps is very old. The endemics – species found only in a confined area – have developed over the past millions of years during the cycles of glacial and interglacial periods or even before these cycles began. Fish, however, are an exception: most endemic fish species emerged only after the end of the last ice age about 15,000 years ago.

The Alps are a habitat for numerous plants and animals – a hotspot of biodiversity on the European continent. As part of the Blue-Green Biodiversity research initiative of the Eawag and WSL research institutes, a group of researchers has now investigated how and when this diversity arose, both on land and in the water. They analysed 497 alpine and perialpine species – from around the Alps – belonging to five main groups: 121 fish, 39 amphipods, 31 amphibians, 158 butterflies and 148 flowering plants.

The analyses show that the Ice Ages have significantly shaped today's alpine biodiversity. Since the Pleistocene, which began about 2.6 million years ago and ended about 12,000 years ago, several warm and cold periods alternated. During the cold periods, glaciers advanced into the valleys and changed the habitats of flora and fauna. Only small ice-free areas far away from each other on the mountain peaks or in the lowlands offered opportunities for retreat for the displaced plants and animals. Due to the spatial separation of populations, they evolved differently, giving rise to many new species.

Particularly interesting for the researchers were the endemic species – species that are only found in a very narrow geographic area. Luiz Jardim de Queiroz, researcher at the aquatic research institute Eawag and the University of Bern as well as lead author of the study recently published in the scientific journal Proceedings of the Royal Society B: Biological Sciences, says: "While the endemic species of amphipods, amphibians, butterflies and flowering plants are largely very old and originated during or even before the Pleistocene, most of the endemic fish species are surprisingly young. The vast majority of them only appeared after the end of the last glacial period about 15,000 years ago."

Since many, if not all, alpine and perialpine waters were covered by a thick layer of ice during the Pleistocene Ice Ages, freshwater habitats were unsuitable for fish species, and local fish populations most probably died out in the Alps. Only after the end of the last Ice Age were they able to migrate again likely from lower-lying river sections of the large rivers such as the Danube, the Rhine or the Rhone. "In the perialpine lakes, a few of these colonisers then specialised within a short time, adapting to several ecological niches in the same lakes and thus formed several new species in most lakes, all of which endemic," says Luiz Jardim de Queiroz.

The amphipods examined in this study did not suffer the same fate as the fish. Since unlike fish they do not depend on large, open water habitats, they were able to survive the Ice Ages in small outlets or under the glaciers in caves and in groundwater. Therefore, most of the endemic amphipod species of the Alps are ancient and some even predate the Pleistocene. The amphibians, in turn, need free water for breeding only in spring and summer and spend the rest of their lives on land. They therefore also found refugia in the Alps during the Ice Ages. And as for the terrestrial species, many of the butterflies and plant species found refugial habitats to persist through the Ice Ages too.

The fish are slow, but creative colonisers

The researchers suggest that the difference in the pace of speciation between fish and the other groups is due to how fast they could colonise the new habitats that opened up after the last Ice Age. Terrestrial species should have colonised those areas relatively fast, as they can disperse in any direction. Butterflies, for example, fly from place to place without facing great obstacles. The seeds of many plants, in turn, can be transported by the wind or by birds over great distances.

Fish species, however, must first navigate through widely branching rivers to colonise the ecologically highly isolated lakes that emerged in the headwaters of the river networks after the glaciers retreated. This takes time, especially for the species that came from more distant temperate or warm water refugia. Most river fish also found the deep and cold lakes had little to offer them. "Therefore, only a few newcomers, adapted to cold water, such as whitefish and chars, that probably arrived early from relatively nearby Pleistocene lowland areas, were able to occupy this habitat and diversify," adds Ole Seehausen, department head at Eawag, professor at the University of Bern and senior author of the study.

This different speed of dispersal influences the pace of speciation. If new habitats are quickly colonised by many different newcomers, all available niches are occupied within a short time. That is what probably occurred in the terrestrial alpine habitat. Therefore, plants and animals have fewer opportunities to evolve new specialisations and form new species. The first cold water fish species to migrate back to the alpine lakes, however, found diverse, unused habitats and were able to diversify rapidly. The researchers see this as one of the main reasons for the astonishingly fast pace of speciation in some fish after the end of the last Ice Age.

The researchers hope that the new findings will also contribute to the protection of alpine biodiversity. "If we understand how biodiversity evolved in the past, we can better foresee how species will respond to future climate changes, allowing us to develop strategies to preserve them," says Luiz Jardim de Queiroz.

This study is part of the research project "Biodiversity assembly in blue and green ecosystems: speciation versus immigration", which contributes to the Blue-Green Biodiversity research initiative – an Eawag-WSL collaboration that addresses biodiversity across aquatic and terrestrial ecosystems. The initiative is funded by the ETH Board.

Climate, immigration and speciation shape terrestrial and aquatic biodiversity in the European Alps