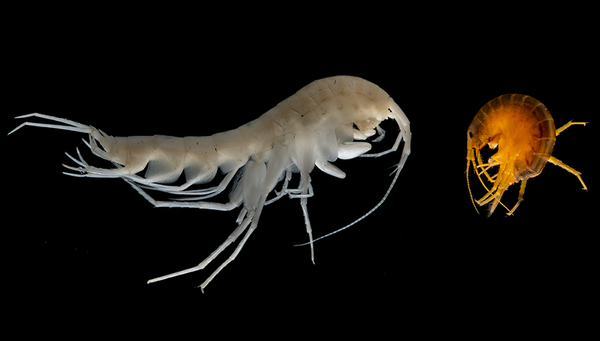 Until recently, researchers assumed that Switzerland had around 20 native species of amphipods. Now, a project by the Swiss Federal Institute of Aquatic Science and Technology (Eawag) and the University of Zurich has revealed that there are actually more than 40. It is always worth taking a closer look, because we can only protect the things that we know exist.

This huge diversity of amphipods came as welcome news, but it has less to do with an actual increase in biodiversity and more to do with the fact that the researchers simply looked more closely. In a large-scale research project led by Professor Florian Altermatt, the scientists studied the amphipods of Switzerland by searching for the millimetre-sized creatures in every possible environment, including in the groundwater and caves. This work led to the identification of at least 40 distinct species, six of which have been identified and described for the first time.

The research findings have already been summarised in a 2019 book about the amphipods of Switzerland as part of the Fauna Helvetica series. Now, an online identification key is also available to allow experts and members of the public to identify “their” amphipods themselves at http://ekey.amphipod.ch.

The drawings in the book illustrate the huge diversity that exists within the amphipods. (Eawag, CSCF)

Amphipods are some of the most important invertebrate organisms in water and perform vital ecological functions, such as acting as a food source for fish or breaking down leaves. They have a range of different requirements in terms of habitat and water quality and could therefore play a much more effective role in waterbody monitoring than they do currently.

Help from many sources

Astonishingly little was known about amphipods until recently – partly because of their size, but also because some of the creatures live in careful hiding. “It’s surprising that there are still big gaps in our knowledge of biodiversity, even in Central Europe,” says Florian Altermatt, “which is one of the reasons why I launched the project eight years ago.” Consequently, the scientists benefit greatly from the help of cave researchers and water suppliers with the project Amphipod.CH. “We expect that a few more species will be added to the list in the near future,” says Dr Roman Alther, who plays a key role in the project as a researcher at Eawag’s Department of Aquatic Ecology. However, Alther is also aware that some of the species are already under threat – and explains that the project is all the more important because it provides an essential basis for recognising any changes. As Alther says in the short video: “We can only protect what we know about.”

Images, drawings and distribution maps (for Gammarus fossarum in this case) are key elements of the book.

Amphipods are a highly diverse group of aquatic invertebrates with >10,000 described species globally. About 20% of these are freshwater species, with half of them found in the West Palaearctic. Amphipods inhabit almost all freshwater ecosystems, including lakes, rivers, streams, as well as cave and groundwater systems, and can be the dominant macroinvertebrates in these habitats. They exhibit essential roles in the functioning of aquatic ecosystems, contributing to leaf litter breakdown and serving as important prey for fish. Furthermore, they are commonly used as indicator taxa for biomonitoring and in ecotoxicological studies. Many amphipod communities are currently undergoing rapid changes due to various drivers of global change, and some amphipod species are among the most successful nonnative invasive invertebrates.
Despite their ecological and economic significance, the knowledge on amphipods in Switzerland was hitherto limited, and until now no checklist, distribution maps, or broadscale estimates on genetic, functional, and morphological diversity of all amphipod species in Switzerland existed. All hitherto available literature on the ecology, faunistics, and taxonomy of amphipods in Central Europe is either outdated by many decades (Chevreux & Fage, 1925; Schellenberg, 1942), does not cover all species (Ginet, 1995; Eggers & Martens, 2001, Piscart & Bollache, 2012), or is only targeting neighboring countries (Vornatscher, 1965; Karaman, 1993; Eggers & Martens, 2001; Piscart & Bollache, 2012, Zettler & Zettler, 2017). This lack of appropriate baseline information on the ecology, distribution and faunistics of amphipods in Switzerland is a serious limitation for fundamental ecological research, impedes appropriate conservation strategies, and limits the use and application of amphipods as indicator taxa.
See Institutional Repository
Altermatt, F.; Alther, R.; Fišer, C.; Švara, V. (2019) Amphipoda (Flohkrebse) der Schweiz. Checkliste, Bestimmung und Atlas, 389 p, Institutional Repository

The project is supported by: