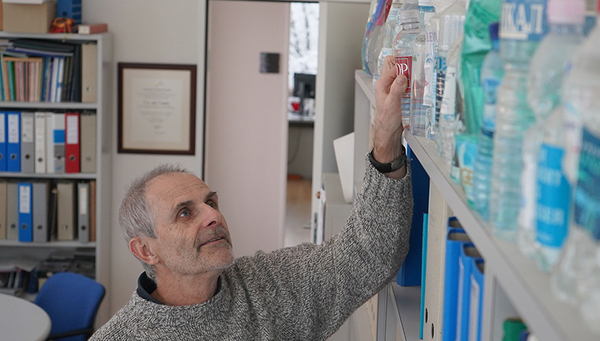 Having only recently received the prestigious American Chemical Society award, Eawag researcher and EPFL professor Urs von Gunten has now been recognised for outstanding services by the journal Environmental Science and Technology (ES&T). Also receiving the accolade this year was former Eawag scientist Beate Escher, who is currently researching and teaching at the Helmholtz Centre in Leipzig and at the University of Tübingen.

To a researcher, getting your headshot on the cover of a renowned peer-reviewed journal is like a politician or musician being featured on the cover of Time Magazine, or a model making it to the cover of Vogue. The two environmental chemists, Prof. Beate Escher and Prof. Urs von Gunten have done just that! They are gazing out at the readers from the front of the January edition of Environmental Science and Technology (ES&T). How did they achieve this? By earning themselves the prestigious “2023 Outstanding Achievements in Environmental Science & Technology Award” from ES&T.

The Editors-in-Chief of ES&T and ES&T Letters write that Escher and von Gunten are both not only outstanding academics, but have also made significant scientific contributions with real-world relevance to the fields of human and ecosystem health. The Editors further comment that the researchers’ work would also attest to how vital it is that research is carried out at the intersection between environmental sciences and engineering so as to enable us to understand and, ultimately, overcome complex environmental problems.

Oxidation chemistry at the centre

In their accolades, the editors describe Urs von Gunten as one of the world’s leading scientists in the field of oxidation chemistry. His research into oxidation processes, and particularly ozonation, had shed important light on the processes that take place, they said. In particular, von Gunten had elucidated the conditions under which trace substances could be degraded during oxidation and in which problematic by-products could arise, as well as showing how these can be removed or avoided. “His research work has led to new, fundamental standard industry practices in the areas of drinking water and wastewater treatment”, says the ES&T editorial.

Studying the fundamentals and applications

The award certainly doesn’t make the recipient rich! It comes with US$1,000 plus an invitation to speak at the ACS spring meeting in Indianapolis. Nevertheless, von Gunten is delighted to have been selected: “It leads me to the conclusion that my publications have not only reached the specialised community of researchers, but have also found their way into practice. That is quite an honour.” In response to what the most important step was in his career, he doesn’t hesitate: "The fact that I came to Eawag 30 years ago. That opened up a great number of opportunities for me both nationally and internationally.” And – two years before his retirement – what advice does von Gunten have for young researchers? "Cultivate a sense of fascination for the combination of fundamental research and application. Satisfy your scientific curiosity, but at the same time make practical contributions to solving environmental problems.”