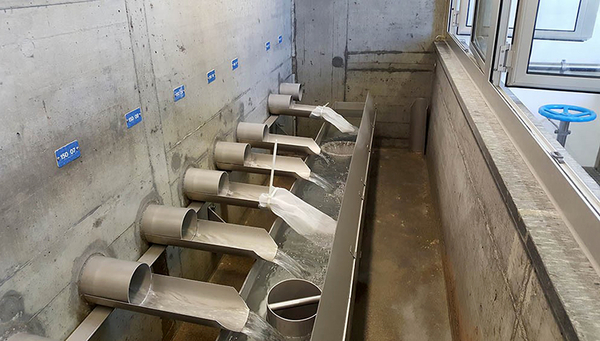 Groundwater is also an ecosystem, but little is known about the biodiversity underground. Eawag researchers have now documented the diversity of life in Swiss groundwater in a pilot study – and discovered previously unknown species of amphipods in the process. Here they relied on a citizen science approach.

With a length of two centimetres, amphipods are not particularly large even in surface waters, but in groundwater they are tiny. They usually measure between one and ten millimetres. A team led by Prof Florian Altermatt of the aquatic research institute Eawag has investigated the species of amphipods and other organisms found in Swiss groundwater and discovered four new amphipod species.

The fact that groundwater is also an aquatic habitat has been known for a long while and has been documented over a considerable period of time in certain regions of Europe. But, says Roman Alther, lead author of the study: "Knowledge of the diversity of subterranean organisms is still fragmentary, even in a country like Switzerland where the animal world is relatively well studied." Now basic knowledge concerning the diversity of life underground is to be compiled in Switzerland. "It is important to protect this biodiversity as well," says biologist Alther, "because subterranean ecosystems provide important services for us, such as drinking water." As a reminder: about 80 percent of drinking water in Switzerland is obtained from groundwater.

Field work in a groundwater well in the Töss catchment. Photo: Roman Alther

In their pilot study, Florian Altermatt’s group has now laid the foundation for a nationwide inventory. Groundwater samples from 313 sites in the cantons of Aargau, Basel-Landschaft, Solothurn and Zurich revealed a diverse range of previously undocumented aquatic fauna: these include organisms from various significant groups of invertebrates, in particular crustaceans. The researchers were particularly interested in the cave amphipods (Niphargus), a genus of amphipods. Individuals of eight species were found in the groundwater samples, two of which (N. fontanus and N. kieferi) were found for the first time in Switzerland. In addition, the researchers discovered four phylogenetic lineages previously unknown to science, which could be new species. One of these has now been formally described as the new species Niphargus arolaensis the Aare groundwater amphipod.

What is special about the study of the groundwater fauna is not least how the researchers proceeded with the data collection. When taking groundwater samples, they relied on the support of water supply managers. In order to publicise the research project among drinking water suppliers, the project was presented in personal letters, at a specialist conference and in direct discussions. This approach achieved resounding success: out of 130 water supply managers who showed a closer interest in the project, 82 finally agreed to take samples.

"The interest and willingness to help that we have encountered from the water supply managers have been fantastic."
Roman Alther.

The sampling material with which the water supply managers involved in the project were equipped. Photo: Nicole Bongni

The citizen science approach with a selected group of citizen researchers will also be part of the already planned expansion of the project. Over the next few years, data will be collected from several hundred well chambers spread throughout Switzerland. The objective is to provide a nationwide overview of groundwater biodiversity. In future, the environmental DNA method will also be used. For example, skin particles or faeces from living creatures are sufficient to document their presence.

One of the objectives of the extended project is to establish basic information in order to be able to use the amphipods and their occurrence as a possible indicator of groundwater quality. So far, the quality of the groundwater has been examined on the basis of physical-chemical parameters and the contamination with bacteria determined. In surface waters, on the other hand, the monitoring of water quality with the help of bioindicators is widespread. They are considered as sensors for very low-threshold or long-term pollution and can integrate several factors. "There are no indicators for the groundwater so far," says Roman Alther, "but basically a presence of amphipods and other species is a good sign."

Knowledge on the diversity and distribution of subterranean organisms is still scattered, even in faunistically relatively well-researched countries such as Switzerland. This is mostly due to the restricted access to these subterranean habitats. Better knowledge on these organisms is needed, because they contribute substantially to overall biodiversity of a region, often contain unique elements of biodiversity, and can potentially be indicative of the ecological status of subterranean ecosystems that are providing important ecosystem services such as drinking water. Past research on subterranean organisms has often used highly specialised sampling techniques and expert knowledge. Here, we show that inclusion of non-professionals can be an alternative and highly promising sampling strategy. We retrieved citizen science-based samples from municipal groundwater wells across Switzerland, mainly from the Swiss Plateau. Opportunistic samples from 313 sites revealed a previously undocumented groundwater fauna including organisms from different major invertebrate groups, with a dominance of crustaceans. Here, we studied amphipods of the genus Niphargus. Among all 363 individuals sampled, we found in total eight nominal species. Two of them, namely N. fontanus and N. kieferi, are reported for Switzerland for the first time. We also found four further phylogenetic lineages that are potentially new species to science. One of them is here formally described as Niphargus arolaensis sp. nov. The description is based on molecular and morphometric data. Our study proves the suitability of citizen science to document subterranean diversity, supports groundwater conservation efforts with data, and raises awareness for the relevance and biodiversity of groundwater amphipods among stakeholders.
See DOI
See Institutional Repository
Alther, R.; Bongni, N.; Borko, Š.; Fišer, C.; Altermatt, F. (2021) Citizen science approach reveals groundwater fauna in Switzerland and a new species of Niphargus (Amphipoda, Niphargidae), Subterranean Biology, 39, 1-31, doi:10.3897/subtbiol.39.66755, Institutional Repository