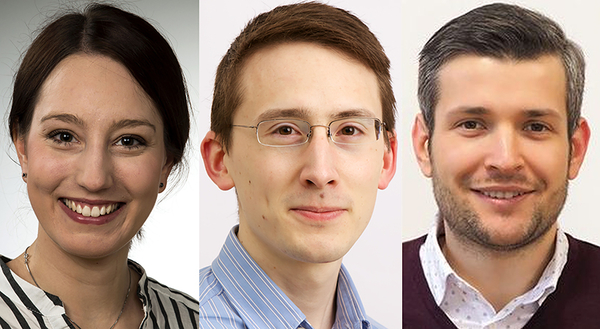 The environmental chemist Barbara F. Günthardt has been awarded the ETH Medal for her doctoral thesis on plant toxins. She has not only developed methods for quantifying these substances, but has also built up a database and identified the releasing plants for individual substances.

When it comes to micropollutants in water, most people think primarily of pesticides, pharmaceuticals or chemicals from households and industry. But there are also thousands of substances of plant origin that are toxic. In her dissertation, Barbara F. Günthardt collected around 1600 of these substances from over 800 plants and their effects on the aquatic environment. She also searched for them in water bodies. Now she is being awarded the ETH Medal for her systematic and carefully worked out approach.

Starting from a newly built database, the doctoral student prioritised around 500 toxins based on their persistency, chemical-physical properties and frequency of occurrence. She has published a separate article on this in the Journal of Agricultural and Food Chemistry of the ACS [1] and in Science of the Total Environment [2]. In addition, the TPPT database (for Toxic Plant-PhytoToxin) is freely available on the Agroscope website [3].

In her dissertation, Barbara Günthardt subsequently developed an analytical method to quantify the 134 most important phytotoxins in samples using high-resolution mass spectrometry. She also immediately applied her method in the field and examined samples from 20 streams. She was able to publish an article on this in a special issue of the journal Chimia on Chemistry and the Environment [4]. Günthardt has placed a special focus on the investigation of pyrrolizidine alkaloids. These substances are found in around 6000 plants worldwide, which use them to protect themselves from browsing. Some of them have a liver-toxic, genotoxic or carcinogenic effect on animals. The researcher has uncovered the invasive greiseweed Senecio inaequidens as the main causative agent in the samples from Swiss streams - in some cases with considerable concentrations. Günthardt was also able to publish an article on this in the journal Environmental Science and Technology [5].

The 4 publications of the dissertation entitled "A Systematic Assessment of the Aquatic Exposure to Phytotoxins" are open access in DORA. The thesis itself https://doi.org/10.3929/ethz-b-000488067 is currently still under embargo. The work was jointly supervised by Dr Thomas Bucheli (Agroscope) and Prof Juliane Hollender (Eawag and ETH). Most of the work was carried out at Agroscope, but Barbara Günthardt was able to use sampling equipment and the high-resolution analytical instruments at Eawag.

Improve the prediction of urban floods

Matthew Moy de Vitry received the award for his dissertation on "Public Surveillance and the Future of Urban Pluvial Flood Modelling" [6] supervised by Prof. Max Maurer in the Department of Urban Water Management. The aim of his work was to improve the prediction of urban floods and, thus, to be able to better protect urban population and infrastructure. As the models used for forecasting were previously not sufficiently reliable, owing to a lack of data for calibration and validation, he developed innovative and cost-effective approaches for additional data sources - such as images and videos from traffic surveillance cameras or social media. Matthew has already been honoured for this work with the Otto Jaag Water Conservation Prize in November 2020.

"I would love to cut the ETH medal into pieces and share it with the many colleagues who made the work possible," says Matthew, "i.e. supervisors, technicians, co-authors and all the people who contribute to the special Eawag atmosphere".

Since completing his dissertation, Matthew works as a web developer and data scientist at Hades Technologies Ltd, an ETH spin-off that develops data models for automatic detection damage of defects in sewers, using machine learning.

"I was very surprised when my work was awarded the ETH Medal," says Marius, "because I had rather in mind what I could have done better. I am very honored to receive this prize and grateful to those who contributed to this work”. He would like to invest the prize money in his further education. Marius Neamtu now works as a project engineer at the Holinger company in Zurich, where he is responsible for planning major international water supply projects.

The ETH Medal, which comes with prize money of 2000 Swiss francs, is awarded every year to outstanding doctoral theses. The award for Neamtu and Moy de Vitry was presented by Rector Sarah Springmann at the doctoral ceremony on 9 July, the one for Günthardt is scheduled for the beginning of 2022.

The production of toxic plant secondary metabolites (phytotoxins) for defense is a widespread phenomenon in the plant kingdom and is even present in agricultural crops. These phytotoxins may have similar characteristics to anthropogenic micropollutants in terms of persistence and toxicity. However, they are only rarely included in environmental risk assessments, partly because a systematic overview of phytotoxins is missing. Here, we present a newly developed, freely available database, Toxic Plants-PhytoToxins (TPPT), containing 1586 phytotoxins of potential ecotoxicological relevance in Central Europe linked to 844 plant species. Our database summarizes phytotoxin patterns in plant species and provides detailed biological and chemical information as well as in silico estimated properties. Using the database, we evaluated phytotoxins regarding occurrence, approximated from the frequencies of Swiss plant species; environmental behavior based on aquatic persistence and mobility; and toxicity. The assessment showed that over 34% of all phytotoxins are potential aquatic micropollutants and should be included in environmental investigations.
See DOI
See Institutional Repository
Günthardt, B. F.; Hollender, J.; Hungerbühler, K.; Scheringer, M.; Bucheli, T. D. (2018) Comprehensive toxic plants-phytotoxins database and its application in assessing aquatic micropollution potential, Journal of Agricultural and Food Chemistry, 66(29), 7577-7588, doi:10.1021/acs.jafc.8b01639, Institutional Repository

Toxic plant secondary metabolites (PSMs), so-called phytotoxins, occur widely in plant species. Many of these phytotoxins have similar mobility, persistence, and toxicity properties in the environment as anthropogenic micropollutants, which increasingly contaminate surface waters. Although recent case studies have shown the aquatic relevance of phytotoxins, the overall exposure remains unknown. Therefore, we performed a detailed occurrence analysis covering 134 phytotoxins from 27 PSM classes. Water samples from seven small Swiss streams with catchment areas from 1.7 to 23 km2 and varying land uses were gathered over several months to investigate seasonal impacts. They were complemented with samples from different biogeographical regions to cover variations in vegetation. A broad SPE-LC-HRMS/MS method was applied with limits of detection below 5 ng/L for over 80% of the 134 included phytotoxins. In total, we confirmed 39 phytotoxins belonging to 13 PSM classes, which corresponds to almost 30% of all included phytotoxins. Several alkaloids were regularly detected in the low ng/L-range, with average detection frequencies of 21%. This is consistent with the previously estimated persistence and mobility properties that indicated a high contamination potential. Coumarins were previously predicted to be unstable, however, detection frequencies were around 89%, and maximal concentrations up to 90 ng/L were measured for fraxetin produced by various trees. Overall, rainy weather conditions at full vegetation led to the highest total phytotoxin concentrations, which might potentially be most critical for aquatic organisms.
See DOI
See Institutional Repository
Günthardt, B. F.; Hollender, J.; Scheringer, M.; Hungerbühler, K.; Nanusha, M. Y.; Brack, W.; Bucheli, T. D. (2021) Aquatic occurrence of phytotoxins in small streams triggered by biogeography, vegetation growth stage, and precipitation, Science of the Total Environment, 798, 149128 (11 pp.), doi:10.1016/j.scitotenv.2021.149128, Institutional Repository

"Is there anybody else out there?" - First insights from a suspect screening for phytotoxins in surface water

To protect themselves, plants can produce toxic secondary metabolites (phytotoxins) that appear with widely varying structures and negative effects. These phytotoxins often show similar properties as known aquatic micropollutants in terms of mobility, persistence, toxicity, and possibly also ecotoxicity. However, their occurrence in surface waters remains largely unknown, which is also due to unknown ability of available screening approaches to detect them. Therefore, we performed a target and suspect screening based on a persistence-mobility prioritization for phytotoxins in small Swiss creeks using high resolution mass spectrometry. In total, three of 26 targets were detected, three of 78 suspects tentatively identified, and six suspects fully confirmed by reference standards. To the best of our knowledge, it is the first time that three different plant secondary metabolite classes are detected in the same surface water sample. Estrogenic isoflavones were detected at 73% of the sites with formononetin as main toxin, which is in agreement with previous studies. Furthermore, pyrrolizidine alkaloids and the indole alkaloid gramine were detected. Especially pyrrolizidine alkaloids might be critical due to their production by various plants including the invasive Senecio inaequidens, and their known importance in food and feed safety. Based on these first screening results, different phytotoxin classes should be assessed for their ecotoxicological effects and considered in future water monitoring.
See DOI
See Institutional Repository
Günthardt, B. F.; Schönsee, C. D.; Hollender, J.; Hungerbühler, K.; Scheringer, M.; Bucheli, T. D. (2020) "Is there anybody else out there?" - First insights from a suspect screening for phytotoxins in surface water, Chimia, 74(3), 129-135, doi:10.2533/chimia.2020.129, Institutional Repository

Pyrrolizidine alkaloids (PAs) are found to be toxic pollutants emitted into the environment by numerous plant species, resulting in contamination. In this article, we investigate the occurrence of PAs in the aquatic environment of small Swiss streams combining two different approaches. Pyrrolizidine alkaloids (PAs) are toxic secondary metabolites produced by numerous plant species. Although they were classified as persistent and mobile and found to be emitted into the environment, their occurrence in surface waters is largely unknown. Therefore, we performed a retrospective data analysis of two extensive HRMS campaigns each covering five small streams in Switzerland over the growing season. All sites were contaminated with up to 12 individual PAs and temporal detection frequencies between 36 and 87%. Individual PAs were in the low ng/L range, but rain-induced maximal total PA concentrations reached almost 100 ng/L in late spring and summer. Through PA patterns in water and plants, several species were tentatively identified as the source of contamination, with Senecio spp. and Echium vulgare being the most important. Additionally, two streams were monitored, and PAs were quantified with a newly developed, faster, and more sensitive LC−MS/MS method to distinguish different plant-based and indirect human PA sources. A distinctly different PA fingerprint in aqueous plant extracts pointed to invasive Senecio inaequidens as the main source of the surface water contamination at these sites. Results indicate that PA loads may increase if invasive species are sufficiently abundant.
See DOI
See Institutional Repository
Günthardt, B. F.; Wettstein, F. E.; Hollender, J.; Singer, H.; Harri, J.; Scheringer, M.; Hungerbühler, K.; Bucheli, T. D. (2021) Retrospective HRMS screening and dedicated target analysis reveal a wide exposure to pyrrolizidine alkaloids in small streams, Environmental Science and Technology, 55, 1036-1044, doi:10.1021/acs.est.0c06411, Institutional Repository

Public surveillance and the future of urban pluvial flood modelling

Motivation and objective
Urban pluvial flooding is an issue of increasingly critical importance due to climate change and urbanization. However, the numerical models used for flood forecasting and risk mitigation suffer from a pronounced lack of monitoring data, which affects model accuracy. Monitoring data are necessary so the models, which contain undefined parameters, can be calibrated and validated against real flood events. In particular, it is important that the models are able to reproduce flood behavior in and around buildings, where the most damage is caused. However, conventional flow and water level sensors reach their limits in public spaces like streets due to irregular topography, moving obstacles, and the risk of vandalism. It has been suggested that surveillance cameras and social media could provide the necessary surface flooding data at a fraction of the cost of conventional sensors. The objective of this thesis is to explore how trend-like data can be extracted from surveillance footage and assimilated to boost the reliability of urban pluvial flood models. [...]

Created by Claudia Carle und Andri Bryner
Share with others: