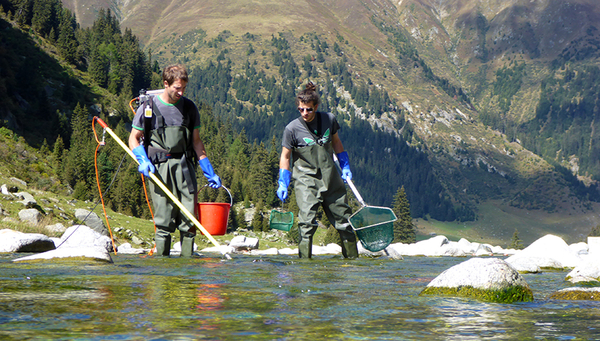 By systematically collecting samples from Switzerland’s rivers, “Progetto Fiumi” has documented more than forty species of fish. In addition, within the various species, the Eawag research group has found a rich diversity that had not been fully assessed before. The project thus provides a basis for the protection of this genetic and ecological diversity.

Switzerland’s rivers harbour a unique biodiversity. From 2013 to 2018 – in order to assess this diversity in more detail for the first time – scientists from the Fish Ecology & Evolution department systematically collected fish samples (in September and October in each case) from hundreds of rivers and streams. The project, known as “Progetto Fiumi”, is funded by the Federal Office for the Environment and coordinated by Jakob Brodersen. “More than half of the fish caught were trout,” he says. “And we found them in almost all habitats – from small mountain streams at an altitude of over 2000 metres above sea level right down to the lowlands.” Altogether, fish were sampled at 308 sites across all types of river and stream throughout Switzerland.

Trout have long been known to exhibit considerable diversity: to date, five species have been distinguished, which developed in complete isolation from each other in the major river systems – Atlantic trout (Salmo trutta) in tributaries of the Rhine, Rhône trout (Salmo rhodanensis), marble trout (Salmo marmoratus) and Northern Italian brook trout (Salmo cenerinus) in rivers draining to the Adriatic, and Black Sea trout (Salmo labrax) in the Inn. In the early twentieth century, Swiss fish biologists also drew attention to different forms of trout around the lakes of the Engadine.

In systematically recording the multiple variations between and within species, Brodersen’s group found forms that differ in appearance, behaviour and in some cases also genetic composition. For example, studies in the catchment of Lake Lucerne showed that trout in streams with constant flows show greater individual specialisation in prey selection than trout in mountain torrents with highly variable flows. In Graubünden, the researchers compared lowland river trout – living in relatively favourable environmental conditions – with their relatives in the inhospitable upper reaches of mountain torrents. Contrary to expectations, however, the “Alpine trout” were not smaller at first spawning but in fact significantly larger than the lowland trout – an important consideration when minimum catch sizes are specified. In the canton of Vaud, authorities and fishery inspectors drew the researchers’ attention to a stream where spotted trout live alongside unspotted specimens. Genetic studies revealed that the spotted fish are closely related to other river trout living nearby, but not to their unspotted neighbours, with which they do not generally mate.

The Eawag group also found various ecological adaptations and local forms in all other fish species – from the widely distributed bullhead to barbel, minnow and other cyprinids which are the dominant species in large, slow-flowing rivers. In some cases, initial genetic analyses did not confirm existing assumptions, suggesting that further surprises may be in store with these species.

To facilitate further research on previously largely unknown within-species diversity, a collection has been established. This currently comprises around 10,000 fish, 20,000 tissue samples and environmental samples providing information on the food web at sampling sites. Jakob Brodersen says: “The collection at Eawag in Kastanienbaum is available as an extensive database for local studies. At the same time, it is being continuously updated and refined by reports from the public and local investigations.”

The collection is already being used for a variety of applied research projects, since fish diversity is threatened by river engineering, barriers to migration, hydropeaking downstream of hydropower plants and other anthropogenic factors. Under the new Waters Protection Act, severely degraded habitats are to be restored in Switzerland. Among other things, Progetto Fiumi provides a basis for monitoring programmes and applied research. It will help to ensure that investments in restoration measures are targeted in such a way that fish actually benefit and genetic diversity is not lost before it has even been properly recorded.

Inventory also in the lakes

Similar to "Progetto fiumi", from 2010 to 2015 Eawag conducted a "Projet Lac" study of fish diversity in Alpine lakes. Over 70 fish species were identified in collaboration with the cantons, the Federal Office for the Environment, the University of Berne, the Natural History Museum in Bern and other partners. Many species from very deep waters, above all whitefish and char, are found only in those lakes where, in the course of evolution, at least since the last ice age, originated by adjusting to the extreme environments. In most of the lakes however, former deep-water fish species have been lost due to overfertilization. >> www.eawag.ch/projetlac