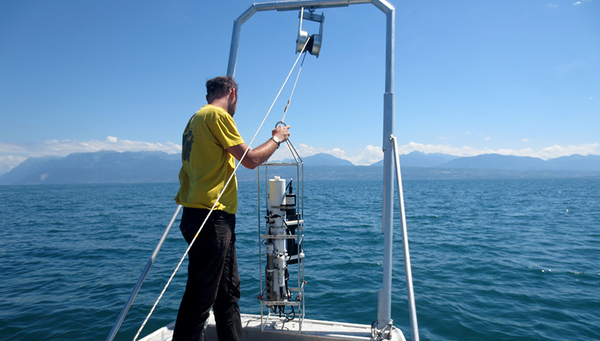 “No bathing” rules were still imposed on many Swiss lakeshores until the 1980s. The lakes were literally running out of air at that time: they were polluted, over-fertilised and some, like Lake Baldegg or Lake Hallwil, had to be artificially aerated because the decomposition of the biomass in the deep water depleted all the oxygen and turned the lakes into inhospitable environments. Even though much has changed since then thanks to better wastewater treatment, a ban on phosphorus in detergents and stricter measures in agriculture, the oxygen content of many Swiss lakes is still insufficient. It turns out that less phosphorus does not automatically mean less biomass – the relationships in the lakes are more complex than assumed.

Over several years, a research group from Eawag and the EPFL has been jointly investigating how complex this is. The scientists have taken a closer look at the organic carbon cycle that emerges from biomass. “We were able to quantify and break down how much organic carbon is produced in the lakes based on oxygen depletion and processes in the sediment,” says Beat Müller from the Surface Waters Department at Eawag. Based on these findings, the research team has developed a method that makes it easy to estimate how large the biomass production is in a lake and how it has developed in the past.

Processes in deep water are crucial

At the beginning of the carbon cycle in a lake is the phytoplankton, which lives in the nutrient-rich, light-flooded surface water and carries out photosynthesis. These organisms absorb nutrients and CO2, use them to build up organic material and release oxygen. The resulting biomass is referred to as primary production. When algae and plankton die off, part of the dead biomass sinks into the deep water. This net ecosystem production – i.e. the amount of organic carbon that reaches the deep layer – is crucial for the oxygen balance of a lake. This is because the bacteria extract oxygen from the water to decompose the organic material.

Decomposition takes place partly while the organic material is still in the water column, and partly later, after is has been deposited on the lakebed. In the absence of oxygen, methane and ammonia are formed in the sediment during the decomposition process. These substances oxidise as soon as oxygen is present again. Lakes with a eutrophic past, which have many such “contaminated sites” in the sediment, thus continue to lose oxygen for many years due to their delayed decomposition processes.

The past becomes measurable

Based on these processes and with regard to different types of lake, the researchers have developed a new method to estimate net ecosystem production. In principle, it is a simple equation: the annual net ecosystem production is the sum of organic material deposited in the sediment in the long term and organic material decomposed in deep water. Both values are known for most Swiss lakes. The amount of sedimentation can be inferred from sediment samples, while carbon decomposition can be inferred from oxygen measurements, which have been systematically carried out by the cantons at least since the 1980s.

Compared to other, direct measurement methods of net ecosystem production, the new, indirect method has decisive advantages, says Müller. “It is much less costly, more reliable, and, above all, because it is based on the existing oxygen measurement series, it allows a reconstruction of past conditions.” In retrospect, it is also possible to analyse how the biomass of a lake has developed. “The new method enables those responsible in the cantons to assess the condition of the lakes in a more differentiated way and to evaluate the effect of the protection measures taken far more reliably.” So, the days of fishing in murky waters could soon be over, as the lakes are becoming – literally – more transparent.