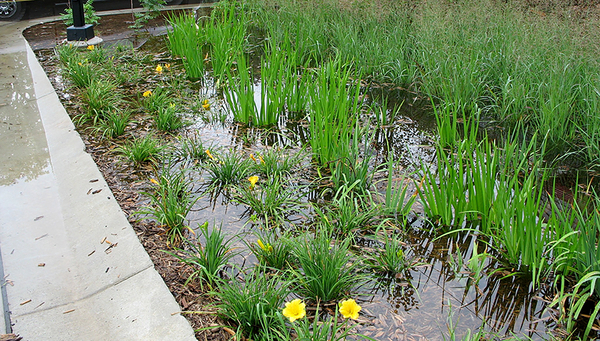 Precipitation varies substantially in terms of location and time. With climate change increasing this variability, urban stormwater systems are also affected – not least in Switzerland. How exactly their performance may change has been investigated by Eawag researcher Lauren Cook in the dissertation she has written at Carnegie Mellon University in Pittsburgh, Pennsylvania (USA).

Urban stormwater systems consist of endless kilometres of subterranean pipes which discharge water from the urban area as swiftly and comprehensively as possible. Referred to as grey infrastructure, this stormwater sewer system is complemented by so-called blue/green infrastructure. This includes, for instance, drained green spaces where water seeps away, slowing and reducing the discharge that flows into the sewer system. Blue/green infrastructure is a potential approach to emulating the natural water cycle and reducing flooding during extreme precipitation events. In the future, this will become increasingly important as climate change affects precipitation patterns and presents urban stormwater systems with major challenges: Climate models show that precipitation is generally becoming more variable and extreme events are becoming more frequent and more severe in many regions of the world. According to Lauren Cook, we must keep track of the systems to ensure that they perform as we want them to even when conditions change.

Lauren Cook has developed a method for monitoring the performance of so-called rain gardens – the most common type of blue/green infrastructure in the USA – which also facilitates an assessment of how the performance will evolve in the changing climate. For this purpose, she has defined four performance parameters: the quantity of water absorbed by the rain garden, the quantity of water flowing into the sewer system, the frequency of rainwater flow into the sewage system and the maximum water retention time on the surface of the garden. She then correlated these parameters with publicly available precipitation readings. For the city of Memphis, for instance, her analysis showed that a higher number of rainy days with more than 50 milimetres of precipitation resulted in lower absorption capacity. If it is known how this specific precipitation parameter evolves in the course of climate change, it is possible to estimate the reaction of the correlated performance parameter. The results show that the direction of the change can be predicted with the help of the precipitation data. Predicting the severity of the change, however, is much more difficult according to Lauren Cook. “Although we can predict that the performance will deteriorate, we cannot say by how much.” Furthermore, the correlations diverged in all of the 17 cities under review, and each catchment area showed slightly different behaviour. Nevertheless, in the individual cases the method was able to signal the time when action should be taken and design adjustments, such as rain garden enlargements, should be made.

According to Max Maurer, Head of the Urban Water Management Department at Eawag and professor at ETH Zurich, the adaptation of urban stormwater systems to changing precipitation patterns is also an important subject for Switzerland. In his own research, he has investigated the effects of climate change on the Swiss sewer system. However, there is no indication of a clear climate signal. This is mostly due to the low temporal and spatial resolution of the climate models – individual short bursts of rainfall cannot map such signals. According to Max Maurer, it is difficult to say whether Lauren Cook’s approach could provide further indications. “Due to the significant altitude differences in Switzerland, the local precipitation network does not lend itself to mapping rain variability.” Furthermore, the dimensions of the catchment areas of the Swiss sewer system and the rain gardens researched in the USA were not the same. However, the expert believes that, given Switzerland’s intention to focus on blue-green infrastructure to counter the effects of climate change, the method could become interesting in the future. “This is much more efficient than increasing the size of a pipe.” Moreover, technologies such as rain gardens, green roofs or green facades have multiple benefits: As well as reducing the incidence of flooding, they also make cities more attractive and cooler and promote biodiversity. Peter Bach, an Eawag researcher who focuses on green infrastructure, agrees that Lauren Cook’s approach has potential in this context. “This type of method is very valuable, it offers a quick way to come up with a rough estimate and indicates where more detailed analysis is required,” says Peter Bach.