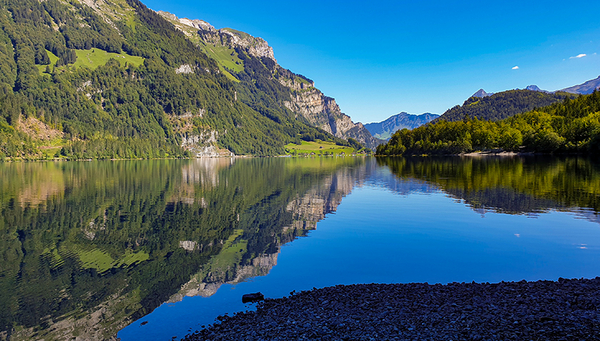 A new simulation study shows that climate change risks significantly altering water temperature, ice cover and mixing of many Swiss lakes. Mid altitude lakes are especially under pressure, running the risk of completely losing ice cover and no longer fully mixing twice per year. Such a change would have fundamental consequences for the functioning of lake ecosystems.

Lakes are subject to strong seasonal cycles. In many Swiss lakes at medium and high altitudes, the water mixes from the surface to the bottom in spring and fall. These vertical overturn events influence many chemical and ecological processes. Oxygen rich and nutrient poor water from the surface mix with oxygen-depleted and nutrient-rich waters from the deep water. At the same time, the lake temperature is homogenized over the entire depth. In winter and summer, on the other hand, a stable stratification keeps the deep water isolated from the processes at the surface.. Lake ecosystems and the entire food web from plankton to fish are adapted to this seasonal variations.

As a new simulation study of the aquatic research institute Eawag now shows, climate change is deeply interfering with these cycles in Swiss lakes. “How strongly the circulation of lakes reacts to climate change depends in particular on their altitude and size. Especially lakes at mid altitudes are very sensitive," says Love Råman Vinnå at the Surface Waters Research Department.

For this study, a team of researchers led by Råman Vinnå examined 29 Swiss lakes along an elevation gradient from 193 m to 1797 m above sea level. They used the one-dimensional physical lake model Simstrat to simulate the dynamic processes of these lakes. For the first time, Råman Vinnå and his team were also able to use the new Swiss climate scenarios (CH2018), which take into account the complex topography of the Alps and thus represent the local climate in more detail. This allows the effects of climate change on lake dynamics to be simulated more accurately than in previous studies. Three future downscaled scenarios were used: the worst-case scenario implies continuously rising greenhouse gas emissions, in an intermediate scenario emissions are peaking around 2050, while the most stringent scenario limits global warming to 2° C.

The team of researchers examined 29 Swiss lakes along an elevation gradient from 193 m to 1797 m above sea level.

The simulation results paint a clear picture: if the climate warms by more than 2° C, many of the lakes at mid altitudes, such as Lac de Joux or Klöntalersee, risk losing their ice cover in the course of the 21st century. Less ice means increased vertical exchange between surface and bottom waters in winter. This counteracts the build-up of stable stratification in winter and therefore shortens its duration. In summer, on the other hand, the duration of stratification is prolonged, raising the risk for oxygen deficiency in deep waters. Furthermore, longer periods of stratification in summer have shown to favour algal growth of toxic cyanobacteria.

At mid altitudes, many lakes risk shifting from a dimictic mixing regime with bottom waters mixing twice per year to a monomictic regime with only one such event per year. Such regime shifts have fundamental consequences for the storage of heat in lakes and for the distribution of oxygen and nutrients. The habitats of many aquatic species could change considerably as they are warmed up from above and oxygen becomes scarcer deeper down. "But by limiting climate warming, we can maintain lake ice and prevent mixing regime shifts for most lakes." says Råman Vinnå.

High-altitude lakes, such as Lake St. Moritz at 1768 meters, on the other hand, will remain dimictic under all climate scenarios, at least in the 21st century, according to the model study. Worth to note, lake water warms up more and duration of ice cover and stratification shortens faster at higher compared to lower elevations. Nevertheless, a tipping point is not likely to be reached in the current century. Ice will thus continue to form in winter on lakes at high elevation and biannual vertical mixing events are maintained. The large lakes at the Swiss Plateau, such as Lake Zurich or Lake Geneva, which already have a monomictic regime, are likely to retain their mixing cycles according to this model study.

“Lakes in Switzerland will undergo climate related changes during the 21st century. What we show here is that by abiding to stringent measures, most effects can be limited and only a small number of lakes will pass a tipping point and experience drastic changes in how they function” says Råman Vinnå.

The vulnerability of lakes to climate change along an altitudinal gradient

Studies of future 21st century climate warming in lakes along altitudinal gradients have been partially obscured by local atmospheric phenomena unresolved in climate models. Here we forced the physical lake model Simstrat with locally downscaled climate models under three future scenarios to investigate the impact on 29 Swiss lakes, varying in size along an altitudinal gradient. Results from the worst-case scenario project substantial change at the end of the century in duration of ice-cover at mid to high altitude (−2 to −107 days), stratification duration (winter −17 to −84 days, summer −2 to 73 days), while lower and especially mid altitude (present day mean annual air temperature from 9 °C to 3 °C) dimictic lakes risk shift to monomictic regimes (seven out of the eight lakes). Analysis further indicates that for many lakes shifts in mixing regime can be avoided by adhering to the most stringent scenario.
See DOI
See Institutional Repository
Råman Vinnå, L.; Medhaug, I.; Schmid, M.; Bouffard, D. (2021) The vulnerability of lakes to climate change along an altitudinal gradient, Communications Earth & Environment, 2, 35 (10 pp.), doi:10.1038/s43247-021-00106-w, Institutional Repository

Eawag projects on the topic

Information from the National Centre for Climate Services NCCS