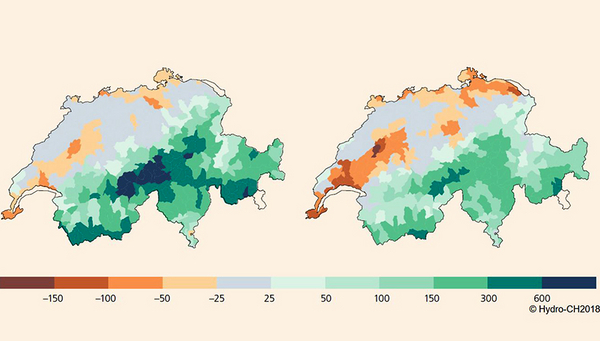 There will be no general shortage, but water may be scarce depending on the region and time of year – conversely, heavier rainfall will lead to more local flooding. These are the findings of the Hydro-CH2018 project published today, Hydrological Principles of Climate Change. The extensive study with collaboration of the Eawag Water Research Institute was carried out under the lead of the Federal Office for the Environment (FOEN) in conjunction with the National Centre for Climate Services (NCCS). Climate change means that our use of water will have to change in future.

How will climate change affect the water regime in Switzerland, the 'reservoir' of Europe? This was the key question addressed by the NCCS Hydro-CH2018 research project. The final symposium took place today, unfortunately only digitally. Almost 700 interested people registered for the livestream. At the same time, the FOEN published the synthesis report "Effects of climate change on Swiss waters" and an short version in brochure form.

Documents and the media release on the conclusion of Hydro-CH2018