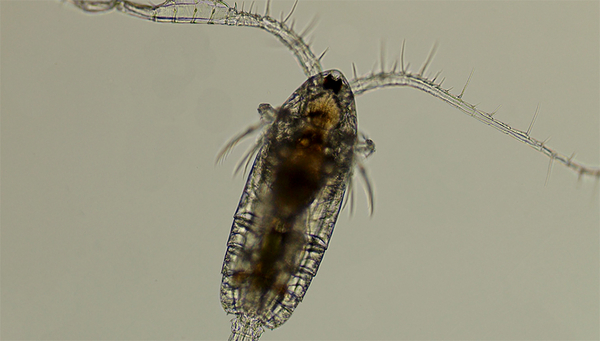 Copepods (minute crustaceans with paddle-like feet) can differentiate between disturbances in water generated by nearby organisms and turbulence caused by wind or waves – an ability which helps them to find mates. It had previously been assumed that turbulent conditions would impede the quest for mates.

The waters inhabited by copepods – seas, estuaries or lakes – are rarely still. How these tiny creatures nonetheless manage to reproduce in such turbulent environments is a question which has long interested Markus Holzner, an environmental engineer at Eawag and the Federal Institute for Forest, Snow and Landscape Research (WSL). With the aid of complex experiments, his research team has now found the answer – an answer which he was not expecting.

Not the best of swimmers

Because of their limited swimming abilities, it had always been assumed that copepods (a species of zooplankton) have to seek out calmer waters for reproduction – for example, deeper layers of a lake or sea, where conditions are less turbulent than at the surface. However, this theory has never been confirmed. It has now been disproved by a group of researchers led by Markus Holzner, a senior scientist at Eawag and WSL. The group demonstrated that copepods can indeed mate successfully even in turbulent conditions.

In their experiments, the scientists used four high-speed cameras to record the motion of copepods and fluorescent tracer particles – in three dimensions – in a water tank. When the trajectories were reconstructed and compared, it was possible to distinguish the various components of the organisms’ motion – passive transport, active swimming and, in particular, rapid jumps.

The recordings show that, in turbulent conditions, the copepods jumped more frequently and were thus more active than in still water. Overall, rates of encounter between individual organisms were also found to be higher with than without turbulence. According to Markus Holzner, this result was not in itself wholly unexpected. More surprising, however, was the finding that encounters were converted into contacts: males moved actively towards organisms in close proximity. Holzner says: “For us, this was very surprising, as it means that males can differentiate between the hydrodynamic signal generated by a conspecific and the background noise caused by turbulence.” On closer examination, it was found that contacts between males and females were in fact followed by mating.

Holzner believes that these findings help to explain why copepods have achieved such evolutionary success and are so widely distributed: they can evidently thrive in the turbulence found in seas, estuaries or lakes. However, there are limits to their ability to withstand such conditions: “If there is very strong turbulence, due to a storm for example, it would probably be difficult even for copepods to reproduce.” But it remains unclear exactly when this point would be reached. Some clues are provided by the new mathematical model developed by the scientists as part of their study. This model makes it possible to predict encounter rates under various physical conditions, which should make it easier to answer such questions in the future – although complex experiments will also most likely remain indispensable.

Via the hairs on their antennae, copepods can sense tiny disturbances in the water and thus detect conspecifics or predators.
(Photo: Markus Holzner)

With the aid of four high-speed cameras, the motion of copepods and fluorescent tracer particles was precisely tracked in a water tank.
(Photo: Markus Holzner)

Zooplankton live in dynamic environments where turbulence may challenge their limited swimming abilities. How this interferes with fundamental behavioral processes remains elusive. We reconstruct simultaneously the trajectories of flow tracers and calanoid copepods and we quantify their ability to find mates when ambient flow imposes physical constrains on their motion and impairs their olfactory orientation. We show that copepods achieve high encounter rates in turbulence due to the contribution of advection and vigorous swimming. Males further convert encounters within the perception radius to contacts and then to mating via directed motion toward nearby organisms within the short time frame of the encounter. Inertial effects do not result in preferential concentration, reducing the geometric collision kernel to the clearance rate, which we model accurately by superposing turbulent velocity and organism motion. This behavioral and physical coupling mechanism may account for the ability of copepods to reproduce in turbulent environments.
See DOI
See Institutional Repository
Michalec, F.-G.; Fouxon, I.; Souissi, S.; Holzner, M. (2020) Efficient mate finding in planktonic copepods swimming in turbulence, eLife, 9, e62014 (25 pp.), doi:10.7554/eLife.62014, Institutional Repository

Video of a mating event from the experiment (red: male, black: female)

Created by Felicitas Erzinger und Andri Bryner
Share with others: