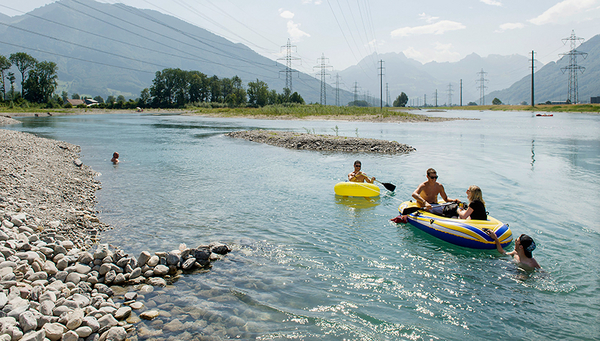 Stream and river restoration measures may be showcase projects for conservationists, but – in the absence of systematic monitoring – it is often unclear what benefits they provide for ecosystems. Eawag scientists extended and synthesized methods for river assessment and demonstrated their usefulness to better quantify ecological effects of river rehabilitation. By Andres Jordi

Before: a linear, monotonous concrete channel – and after: a river meandering through idyllic floodplains. The quality of a restored watercourse may appear to be obvious, but is what is pleasing to humans also, in fact, valuable for nature? According to Amael Paillex, an environmental scientist at Eawag, “Although the number of restoration projects is increasing, we know very little about their ecological effects.” And if the effects are studied, he adds, assessments are often limited to a single group of organisms, while factors such as water quality or hydrological conditions are neglected. “Because outcomes are not adequately evaluated,” Paillex says, “experience from earlier restoration efforts cannot be fed into future projects.” Over the next 80 years, under the revised Waters Protection Act (2011), the cantons are required to rehabilitate a quarter of those rivers and streams which are heavily engineered and in a poor ecological condition. This amounts to around 4000 kilometres of watercourses across Switzerland.

Working with colleagues from the Department of Systems Analysis, Integrated Assessment and Modelling, and the University of Duisburg-Essen, Paillex therefore developed a method that allows the ecological effects of restoration measures to be assessed systematically. The method, which involves a mathematical approach used in decision analysis, is based on the modular stepwise procedure developed for the assessment of Swiss lakes and rivers. It addresses all the relevant states of a watercourse – physical (morphology and hydrology), chemical (water quality) and biological (animals and plants). Existing assessment methods for fish and macroinvertebrates were combined with new methods for the evaluation of ground beetles, riparian vegetation and aquatic plants.

In each case, a number of variables are measured – e.g. the width variability of the river bed, concentrations of nutrients and pesticides, or the number of species. These values are then compared with reference values for near-natural waters so as to determine how the actual state differs from the ideal. Paillex explains: “Using a mathematical method, we can then calculate quality values and assign the various parameters to quality classes.” The scale of values ranges from 0 (bad quality) to 1 (high quality). Comparison of the quality of unrestored and restored river reaches indicates how restoration measures have affected the various sub-states and the overall ecological state. In addition, to determine whether the effects observed are statistically significant – rather than merely being due to methodological imprecision – uncertainty ranges are calculated for all values derived from the measurements.

Increased habitat diversity on the Thur and Töss

To test how the method works in practice, Paillex and his co-workers investigated restored and unrestored sites on the Thur and Töss. Both of these rivers were channelized in the mid‑19th century in order to protect against flooding and to gain agricultural land, and they have both been partly restored in recent decades (Fig. 2). The researchers studied a 1.5‑kilometre reach of the Thur restored by the Cantons of Thurgau and Zurich in 2002 and a 200-metre stretch of the Töss restored in 1999 by the Canton of Zurich. The restored reaches were compared with corresponding degraded reaches. Paillex reports: “Our analyses show an improvement in the overall ecological state of the restored reaches, both on the Thur and on the Töss.” While the unrestored reaches of both rivers are rated as poor, the restored reaches are assessed as moderate in the case of the Thur and (barely) good in that of the Töss (Fig. 3).

Fig. 3: Evaluation of the ecological state of restored and unrestored reaches of the Thur and Töss rivers. The vertical black lines indicate the median quality values; uncertainty is represented by the coloured areas. The colour-coded quality classes are derived from the Swiss river assessment procedure and are similar to those established for the EU Water Framework Directive.

Fig. 4: Differences in diversity between restored and unrestored reaches. As the quality values for riparian vegetation show (cf. Fig. 3), an increase in the number of species does not automatically represent an ecological benefit.

The improvements are apparent, for example, with regard to morphology. In both cases, the restored (widened) reach shows greater variability in river width, water depth and flow velocity than the unrestored reach. The riparian zones are wider, with higher habitat diversity. In most cases, species diversity also benefited from the enhancement (Fig. 4): for example, 13 ground beetle species are now found at the restored Thur site, compared to only 3 at the degraded site – an increase in the quality value from 0.04 (bad) to 0.67 (good). On the Töss, the number of ground beetle species rose from 2 to 9 (improvement in quality value: 0.03 to 0.69).

By contrast, the quality values for riparian vegetation (Thur: 0.47; Töss: 0.39) show less marked improvements. Here, the restored reaches are classified, respectively, as moderate and poor (Fig. 3). According to the researchers, this could be due to the spread of non‑floodplain species from nearby agricultural land, impairing the character of the alluvial habitat. The return of more typical vegetation is also impeded by a lack of connectivity with other floodplains. This may also partly explain why aquatic vegetation failed to benefit from restoration: in the Thur, indigenous species had to contend with an invasive plant species, and in the Töss the number of species declined.

According to the researchers, the field study conducted on the Thur and the Töss demonstrates that their method is suitable for evaluating the benefits of restoration measures. Paillex comments: “A quantitative ecological assessment, taking account of the relevant physical, chemical and biological parameters – and also of uncertainty – provides robust evidence of the effects of restoration.” For other biogeographical regions, the method is to be adapted to local conditions, as there may be differences, for example, in natural species richness. This approach can also be readily integrated into existing river management strategies. Paillex concludes: “Systematic evaluation would not only make the ecological benefits of restoration measures more visible, but also help to improve future projects.”