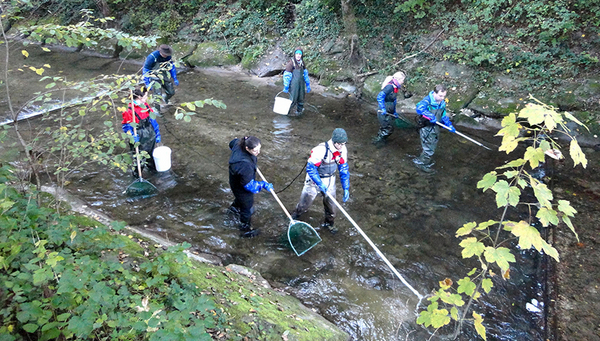 In Switzerland – not to mention the rest of Europe and the United States – freshwater fish are falling victim to a deadly disease that is rampant in the summer and dormant in the winter. It is caused by a parasite that thrives in rivers and attacks salmonid fish in particular. Researchers from EPFL, Eawag and University of Bern have come up with a mathematical model for predicting outbreaks as part of a three-year joint research program.

Freshwater fish are vulnerable to a parasite called Tetracapsuloides bryosalmonae. This parasite, which has no effect on humans, causes proliferative kidney disease (PKD) – which is highly contagious and can wipe out entire fish populations. In Switzerland, this seasonal disease has been detected in rainbow trout, brown trout and char. It has been identified as one of the main causes of the decline in fish populations in recent decades and has played a major role in the extinction of local endemic species.

Researchers from EPFL, the Swiss Federal Institute of Aquatic Science and Technology (Eawag) and the University of Bern’s Center for Fish and Wildlife Health (FIWI) spent three years studying the 50-km-long Wigger River – which crosses the cantons of Aargau and Lucerne in the Alp foothills – and its watershed. In their work, they show how both spatial and environmental features of river systems can be used to better understand the epidemiology and dynamics of waterborne diseases. They also developed a mathematical model that predicts how and where T. bryosalmonae will contaminate its environment.

In creating their epidemiological model, the scientists had to take into account the parasite’s complex life cycle. It appears first in bryozoans – tiny animals attached to stones on the river floor. The parasites are then excreted into the river water as spores and enter fish through their gills and mucous membranes, where the disease first breaks out before attacking the kidneys. The spores are subsequently released through fish urine and can, in mutated form, infect colonies of bryozoans. This means the parasite needs both bryozoans and fish to multiply and mutate. T. bryosalmonae contamination generates few symptoms in cold water but becomes apparent when the water temperature stays above 15 degrees Celsius for several weeks. Its deadly effect on both farmed and wild fish therefore lasts from the summer through early fall. Infected fish that manage to survive may continue excreting spores for several seasons. The researchers had to look at all such biological factors in order to model outbreaks.

“We selected several stretches along the Wigger and in the watershed where we took fish samples, measured the concentration of both bryozoan and parasite DNA in the water, and calculated the hydrological and geomorphological variables,” says Luca Carraro from EPFL’s Laboratory of Ecohydrology. It turns out that the parasite flourishes in moraines, where they are protected from currents. This finding will have to be confirmed, however, and there is no shortage of rivers infested by the parasite in which to test it. As part of their sleuthing, the researchers also needed to factor an array of existing data into their findings in order to account for climate change and water temperatures, and find a way to incorporate the wealth of data collected by the scientific community into their model.

To help predict the spread of bryozoan colonies throughout the watershed, the researchers also came up with a model that interprets the concentration of DNA measured in the water samples. Apart from its relevance for PKD, this model could come in handy in a number of ecohydrological applications for locating either invasive or soon-to-be extinct species in freshwater habitats.

At this stage it is impossible to combat the disease in its natural surroundings. But the Swiss Federal Veterinary Office wants to be sure that any fish introduced into rivers for repopulation purposes are carefully checked to ensure they are free of the parasites.

Predictions of the model at river Wigger. Left: density of the parasite; right: prevalence in young-of-the-year fish at the end of summer 2016.

This text is based on media information from Sandy Evangelista, Press service EPFL.
Press Material: http://go.epfl.ch/FishParasite