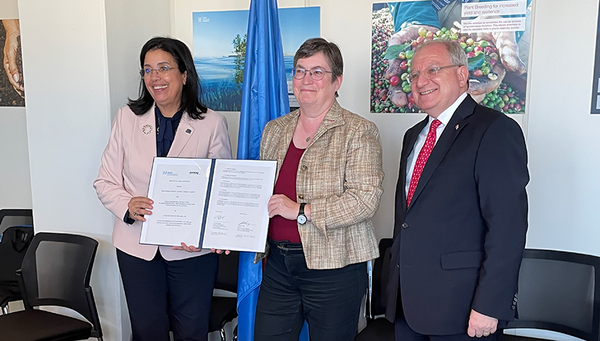 Janet Hering, Director of the aquatic research institute Eawag, signed a cooperation agreement with the International Atomic Energy Agency (IAEA) on Monday 26 September 2022. The cooperation between Eawag and the IAEA should help to further advance groundwater research and support the sustainable utilisation of groundwater resources.

The signing took place in Vienna on the occasion of this year’s IAEA General Conference. The agreement is in the area of the peaceful utilisation of isotopes in the water sector and regulates in particular Eawag’s cooperation with the IAEA Isotope Hydrology Section. The agreement was initiated and financially supported by the Swiss Federal Office of Energy SFOE.

Since the 1960s, the IAEA has operated a global monitoring network for stable water isotopes and slightly radioactive tritium in groundwater. “This is a huge treasure trove of data for water research; we now want to evaluate it together with the IAEA,” says Michael Berg, Head of Eawag’s Water Resources and Drinking Water research department.

Another important area of cooperation between the IAEA and Eawag is the inert gas analysis of groundwater. The laboratory of Rolf Kipfer, Head of the Eawag Environmental Isotope research group and titular professor at the ETH Zurich, is one of the world’s leading facilities for this specialised measurement technology and its applications in the environment and in aquatic systems. Together with the IAEA, the agreement will now enable improved techniques, methods and concepts to be developed for the high-precision analysis of tritium, inert gases and other trace gases in groundwater and other water resources.

Sustainable use of groundwater resources

The agreed cooperation between Eawag and the IAEA is intended to support the IAEA in promoting sustainable water use in its member states and thus contribute to the United Nations' Sustainable Development Goals. International courses in isotope hydrology as well as isotope-based machine learning and artificial intelligence approaches are also planned to transfer the knowledge gained and new technologies to the member states.