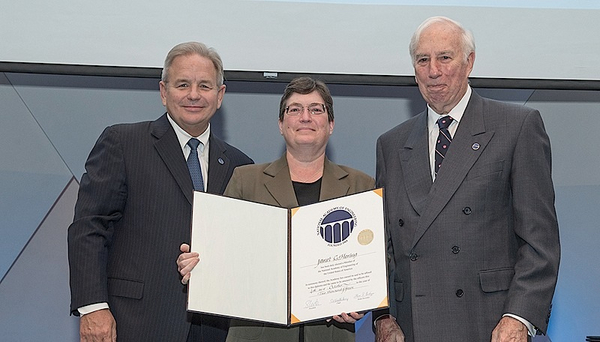 In February the “National Academy of Engineering” (NAE) has elected 67 new members and 12 foreign members. Among the new members is also Eawag director, Prof Janet Hering. The induction took place at the beginning of October 2015.

Election to the “National Academy of Engineering” is among the highest professional distinctions accorded to an engineer. Academy membership honours those who have made outstanding contributions to "engineering research, practice, or education, including, where appropriate, significant contributions to the engineering literature" and to the "pioneering of new and developing fields of technology, making major advancements in traditional fields of engineering, or developing/implementing innovative approaches to engineering education". On the NAE list of the newly elected members Janet Hering is mentioned “for contributions to understanding and practice of removal of inorganic contaminants from drinking water”.