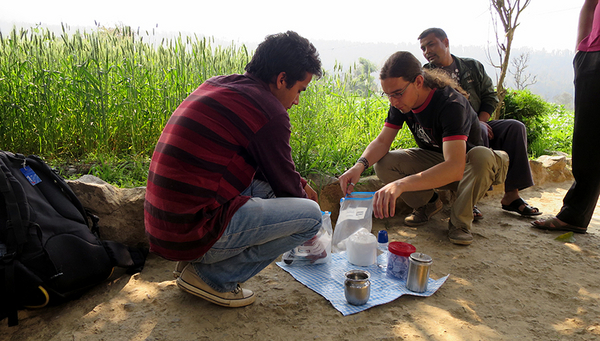 The World Health Organization (WHO) approved the redesignation of Eawag as a “WHO Collaborating Centre for Sanitation and Water in Developing Countries”. Eawag is one of 21 such collaborating centers in Switzerland and 281 throughout Europe. Through the Collaborating Centre, researchers across Eawag’s 12 departments will partner with WHO to undertake joint activities related to water, sanitation, and global health.

In September 2016, Eawag received the renewal of its designation as a WHO Collaborating Centre for an additional four years. Eawag was first designated in 2012, as acknowledgement of its expertise in the fields of solid waste, water and sanitation for development, and its agreement to carry out work to support WHO objectives. Eawag’s designation followed on the establishment of the International Reference Center for Waste Disposal (IRCWD) in 1968, which eventually evolved into the Department of Water and Sanitation in Developing Countries (Sandec).  More recently, Sandec updated its name to Sanitation, Water, and Solid Waste for Development, to better reflect its purpose as an applied research department.

“In 1968, the Reference Center was formed as a knowledge hub and documentation center,” explains  Christian Zurbruegg, member of the directorate and Sandec Group Leader, “under the leadership of Roland Schertenleib, the Reference Center shifted focus toward research in 1975, with the stated objective to contribute to the evidence base informing WASH policies globally. This was the birth of the Sandec Dept and led to our role as a WHO Collaborating Centre.”

Collaboration with focus on safe water and adequate sanitation

WHO/Eawag collaboration in this next phase will focus generally on the topic of safe water and adequate sanitation under the The 2030 Agenda for Sustainable Development. Collaborative activities are divided in the four areas Capacity Building,Gender and WASH, Drinking Water Quality and, Urban Sanitation.

“One area of work is our efforts to contribute to the first edition of the WHO Sanitation Guidelines.  Over the next four years we’ll provide expert input, interpret systematic reviews, and lend guidance on disseminating and enabling countries to implement these guidelines,” explains Sandec Department head Christoph Luethi

Group leader Sara Marks describes the work of her group as focusing on the development and field testing of water quality test kits and monitoring schemes, feeding into risk-based mitigation strategies. “These activities will take place, for example, within an ongoing field study of piped schemes in Mid-Western Nepal in collaboration with HELVETAS and the REACH: Water Security for the Poor program,” she says.

WHO Collaborating Centres include research institutes, universities departments, and other organizations designated by the Director-General to carry out activities in support of the Organization's programmes. Currently, there are over 700 WHO Collaborating Centres worldwide working with WHO on areas including nursing, occupational health, communicable diseases, nutrition, mental health, chronic diseases and health technologies.