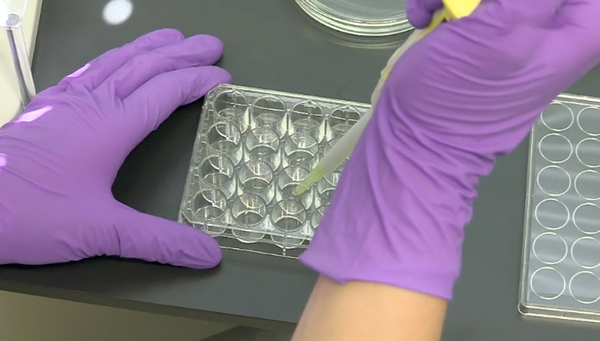 The OECD gives the green light to the fish cell line assay developed at Eawag. This paves the way for companies and authorities around the world to determine the environmental toxicology of chemicals without having to resort to animal testing.

A large number of chemicals are used in everyday products, in agriculture or in industry. At some point, many of these end up in the environment. In order for these substances to be authorised for the market, manufacturers must be able to prove in advance that they are harmless to humans and nature. This is done with toxicity tests in which living creatures are exposed to the effects of the chemicals. Thousands of fish die every year because they are used to test the effect on aquatic vertebrates.

Thanks to a test procedure developed in recent years by the aquatic research institute Eawag, this should soon be a thing of the past. This assay, based on rainbow trout gill cells, has now been approved by the Organisation of Economic Co-operation and Development (OECD) as the latest guideline in the field of environmental toxicology. This paves the way for animal-free approval procedures.

Great interest from the business community

The fish cell line assay is the world’s first alternative to experiments with live fish. The new OECD guideline allows companies to use fish cell line testing for product development and as part of the dossiers for chemical approval. “There is great interest on the part of industry in non-animal tests,” confirms Professor Kristin Schirmer, Head of Department at Eawag, who together with Melanie Fischer (also at Eawag), has taken the lead in driving this pioneering work forwards. Because on the one hand, the demands on environmental risk assessment are growing, and on the other hand, the number of new chemicals and products that need to be tested is constantly increasing. In addition, the fish cell line assay also conserves resources. The miniaturisation through the use of cells allows chemicals, water and time to be saved.

“There is great interest on the part of industry in non-animal tests.”
Kristin Schirmer

Kristin Schirmer assumes that the regulatory authorities, such as the ECHA in Helsinki or the US EPA in the USA, will increasingly accept the fish cell line assay as an equivalent substitute to the regular fish test: “The OECD recommendation was the last important step from our side, after our method had already been certified by ISO two years ago. This should mean that nothing more stands in the way of an animal-free approval procedure.”

In this way, Eawag contributes to the further development of toxicology and makes a significant contribution to the reduction of animal testing. This is because in 2019, tests were carried out on almost 8,000 fish in Switzerland alone for ecotoxicological tests.

This concludes a long and intensive period that required perseverance and a supportive environment. Schirmer already had the idea for this test procedure during her doctoral thesis in the mid-1990s. At the University of Waterloo (CAN), she then worked with exactly the same cell line on which the method is still based today. The cell line goes back to Schirmer’s doctoral supervisor Niels C. Bols, who isolated the cells from the gills of the rainbow trout for the first time and cultivated them in such a way that they can be multiplied as often as desired.

“We chose gill cells because it is the gills that first come into contact with chemicals due to their large surface area in the fish,” explains Schirmer. If the chemicals damage the gill cells, this means that vital processes, such as oxygen supply, no longer function for the fish. “So by observing how the gill cells are damaged by a chemical, we can predict how that chemical would affect a living fish,” says Schirmer.

The cells used for the test come from the rainbow trout.
(Photo: Andreas Hartl)

The award of a project proposal, which Schirmer received from the European Chemical Industry Council (CEFIC) in 2006, marked the actual staring signal for the development of the now validated fish cell line assay. Schirmer continued her research first as Head of Department at the Helmholtz Centre for Environmental Research in Leipzig and from 2008 as Head of Department at Eawag. In 2009, engineer and laboratory technician Melanie Fischer joined the team.

“In a first step, we developed and optimised our method and compared the results with regular tests on fish,” says Schirmer. A study published in 2013 was thus able to prove for the first time that the new fish cell line assay arrives at the same toxicity values for over 30 chemicals as the conventional fish test. “After that, we had to show that the method also works in other laboratories,” says Schirmer. Six laboratories from industry and universities took part in the international ring study conducted for this purpose in 2013-2014. Their results, obtained using the Eawag method, proved to be repeatable and comparable.

The study data laid the foundation for ISO certification in 2019 and the OECD guideline 2021. “Certification by internationally supported organisations is very important, as it is the only way to ensure that the tests are carried out in a standardised manner worldwide and that the results are thus also recognised,” says Schirmer. From the submission to the OECD to the validation that has now taken place, a record short time of only two years passed, during which the method was once again revised in an elaborate process in order to harmonise the proposals and opinions of experts from many different representative countries and organisations. The team was supported by the national representatives of Switzerland (Petra Kunz, Federal Office of the Environment FOEN) and Norway (Sjur Andersen, Norwegian Environmental Protection Agency and Adam Lillicrap, NIVA). Eszter Simon (also at FOEN) supported the work as an expert.

“The commitment of OECD countries to aid the reduction of animal testing is reflected in the swift adoption of this first in vitro method for ecotoxicity testing.”
Leon van der Wal, OECD

Schirmer attributes the fact that the guideline could be adopted in such a short time to the interest and great support of all those involved: “It was an active discussion with OECD countries, industry, NGOs and regulatory authorities.” This is also confirmed by Leon van der Wal of the OECD: “The commitment of OECD countries to aid the reduction of animal testing is reflected in the swift adoption of this first in vitro method for ecotoxicity testing. This is also due to the well-organised and transparent manner in which the lead countries communicated, as well as the hard work of the method developers and the OECD experts reviewing the method.”

Looking back, Kristin Schirmer comments: “Our learning curve was very steep. But the investment of time and energy was worth it. This success for non-animal testing alternatives in ecotoxicology is great and is something that will stay.”

The development of a fish cell line assay for the determination of acute fish toxicity.
(Image: aQuaTox-Solutions)

Award-winning research
Eawag’s work on non-animal test methods is of great importance. The Swiss 3R Competence Centre (3RCC) also sees it that way: the association wants to replace, reduce and improve animal testing and awarded Kristin Schirmer and Melanie Fischer the 3Rs Award for their research. In addition, the researchers were awarded around 251,000 Swiss francs by the 3RCC in 2019. With this, they are working on replacing the foetal calf serum, which is currently still necessary for the cultivation of the cells, with a serum-free medium.

aQuaTox-Solutions
Due to the growing interest of companies, wastewater treatment plant operators and environmental agencies in using the test as a service, the Eawag spin-off aQuaTox-Solutions was founded in 2017. It is the world’s first provider of this and other fish cell line-based test procedures. With the certification by the OECD, and the accompanying confirmation of the high robustness, transferability and comparability, the interest in this test procedure is likely to increase further.

Predicting fish acute toxicity of chemicals in vitro is an attractive alternative method to the conventional approach using juvenile and adult fish. The rainbow trout (Oncorhynchus mykiss) cell line assay with RTgill-W1 cells has been designed for this purpose. It quantifies cell viability using fluorescent measurements for metabolic activity, cell- and lysosomal-membrane integrity on the same set of cells. Results from over 70 organic chemicals attest to the high predictive capacity of this test. We here report on the repeatability (intralaboratory variability) and reproducibility (interlaboratory variability) of the RTgill-W1 cell line assay in a round-robin study focusing on 6 test chemicals involving 6 laboratories from the industrial and academic sector. All participating laboratories were able to establish the assay according to preset quality criteria even though, apart from the lead laboratory, none had previously worked with the RTgill-W1 cell line. Concentration-response modeling, based on either nominal or geometric mean-derived measured concentrations, yielded effect concentrations (EC50) that spanned approximately 4 orders of magnitude over the chemical range, covering all fish acute toxicity categories. Coefficients of variation for intralaboratory and interlaboratory variability for the average of the 3 fluorescent cell viability measurements were 15.5% and 30.8%, respectively, which is comparable to other fish-derived, small-scale bioassays. This study therefore underlines the robustness of the RTgill-W1 cell line assay and its accurate performance when carried out by operators in different laboratory settings.
See DOI
See Institutional Repository
Fischer, M.; Belanger, S. E.; Berckmans, P.; Bernhard, M. J.; Bláha, L.; Coman Schmid, D. E.; Dyer, S. D.; Haupt, T.; Hermens, J. L. M.; Hultman, M. T.; Laue, H.; Lillicrap, A.; Mlnaříková, M.; Natsch, A.; Novák, J.; Sinnige, T. L.; Tollefsen, K. E.; von Niederhäusern, V.; Witters, H.; Županič, A.; Schirmer, K. (2019) Repeatability and reproducibility of the RTgill-W1 cell line assay for predicting fish acute toxicity, Toxicological Sciences, 169(2), 353-364, doi:10.1093/toxsci/kfz057, Institutional Repository