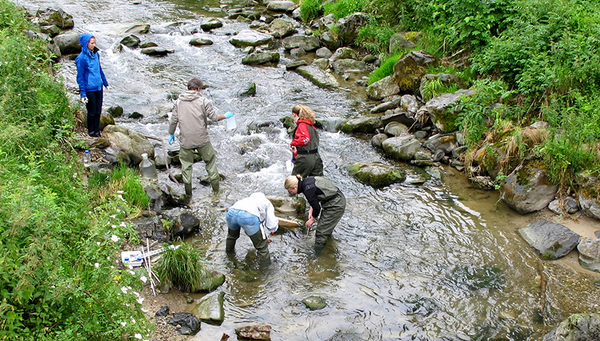 Micropollutants enter rivers and streams in effluents discharged from wastewater treatment plants (WWTPs). As well as having adverse impacts on individual species, these substances appear to alter aquatic ecosystem functions, such as litter decomposition. This was shown by a research project launched by Eawag in view of the planned upgrade of selected Swiss WWTPs to reduce micropollutant loads. The effects of the first upgrades are already evident.

In Switzerland, more than 30,000 different substances are used on a daily basis in innumerable products – pharmaceuticals, cosmetics, cleaning agents or industrial chemicals. Many of these substances find their way – via WWTPs – into surface waters, where they have adverse impacts on aquatic organisms and drinking water resources. To remove micropollutants from wastewater, around a hundred strategic selected WWTPs in Switzerland are to be upgraded in the coming years with an additional treatment step.

The upgrade programme is being closely followed by scientists at Eawag and the Eawag-EPFL Ecotox Centre. As project leader Christian Stamm points out, “This provides a unique opportunity to study, more or less in real time, how aquatic ecosystems respond to a reduction in micropollutants.” In the initial phase, the scientists investigated the current chemical and biological status, prior to WWTP upgrades. Stamm explains: “We also wanted to find out how micropollutants from treated wastewater affect the composition of biological communities and the function of river ecosystems. Here, there are still substantial gaps in our knowledge.”

Between 2013 and 2014, Stamm and his team carried out regular sampling in reaches upstream and downstream of 24 WWTPs and identified the substances present (Fig. 1). The analyses demonstrate that numerous micropollutants enter rivers in treated wastewater. “Particularly striking was the increase in medicines and household chemicals,” says Stamm – in the case of medicines, concentrations were 30 times higher downstream than upstream of WWTPs (Fig. 2). An initial ecotoxicity risk assessment indicated that the anti-inflammatory agent diclofenac and the pesticides diazinon and diuron occur widely in biologically effective concentrations. This is also true of other substances at the regional level.

Organisms downstream of WWTPs showed various symptoms of stress exerted by micropollutants. For example, gene expression associated with cellular detoxification was observed in brown trout. Gammarid populations lacked young individuals, indicating impaired reproduction or increased mortality among juveniles. The diversity of macroinvertebrates, which are sensitive to pesticides, was reduced downstream of wastewater outlets. Also present in effluents are antibiotics and resistant bacteria, which can promote the spread of antibiotic resistance genes in receiving waters.

Loss of adaptations after WWTP upgrade

Algae and bacteria, which colonize the riverbed in the form of biofilms and play an important role in the food web, are also affected by wastewater discharges. Biofilms downstream of WWTPs showed a much greater tolerance towards micropollutants than those living upstream. According to Stamm: “The higher the chemical load, the higher the tolerance, which indicates a causal relationship between exposure and biological effects.”

Biofilms provided evidence of the early effects of a WWTP upgrade: after the introduction of the additional treatment step at the Herisau WWTP, algae in the Glatt river lost their increased tolerance to micropollutants relatively rapidly (Fig. 3). The induced expression of detoxification genes was likewise lost in brown trout living downstream.

Fig. 3: Since the upgrade of the Herisau WWTP, downstream algae have again lost their tolerance to micropollutants: a reduction in biomass production now occurs at lower effective concentrations (EC50). In contrast, no difference can be seen between the two years for which measurements were made at the Hochdorf WWTP (not upgraded). The EC50 indicates the concentration at which a biological function (in this case, biomass production) is impaired in 50 per cent of the population. * = statistically significant result

Often, the effects of micropollutants cannot be directly measured in the field because they are masked by the effects of other constituents of wastewater. So in order to disentangle the various impacts, the researchers also conducted experiments in a 16-channel flume system (Fig. 4). Using this system, they showed, for example, that while the decomposition of organic matter is inhibited by micropollutants, it is promoted by nutrients. Stamm says, “This supports our findings that, depending on the nutrient situation, leaf decomposition rates were around two thirds lower downstream than upstream of treatment plants.” The statistical analysis indicates that , for example, leaf-shredding gammarid populations are decimated by insecticides.

Fig. 4: A 16-channel flume system was used to study the effects of different constituents of wastewater. (Photo: Eawag)