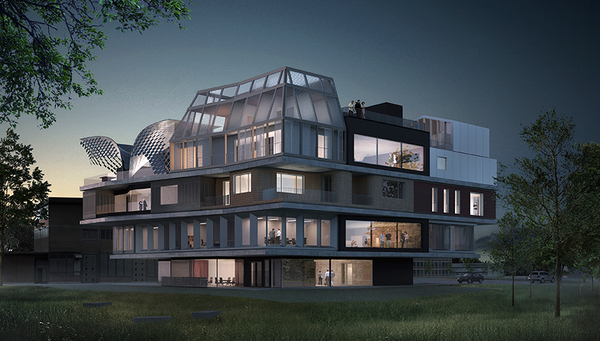 In the modular experimental building known as NEST, Eawag and Empa – together with industrial and scientific partners – are investigating new forms of living and working, innovative construction methods and energy-efficient technologies. In the Water Hub project, researchers are studying, for example, how urine-separating toilets can be used to save water and recover valuable nutrients.

The toilets in the NEST experimental building are specially designed to allow urine to be separated at source. When the user sits down to urinate, a separate drainage pipe is automatically opened. When the flush is activated, this pipe is closed and faeces and toilet paper are flushed into a second pipe. The liquid and solid waste are conveyed to a 100 square-metre basement area, to be processed as part of the Eawag-led Water Hub research project.

The urine-diverting toilets – developed by the German company Duravit in collaboration with Eawag and other partners – are a key element within Water Hub. Project coordinator Bastian Etter of the Process Engineering department explains: “Without urine source separation, much of our research would not be possible.” In the initial phase, Water Hub is focusing on three topics: treatment of and nutrient recovery from urine (known as yellow water), treatment and recycling of water from showers and sinks (grey water), and treatment of faecal matter, paper and flushwater (black water). Additional projects are planned, including research on the use of rainwater, innovative methods of controlling wastewater odour and a platform for collaboration with industry.

Etter comments: “The way we manage wastewater at the moment is actually absurd. We mix faeces with urine, grey water and rainwater, we flush toilets with valuable drinking water – and then at the wastewater treatment plant huge amounts of energy have to be used to separate everything again.” He adds: “Fifty to ninety per cent of the nutrients that have to be removed from our wastewater come from urine.” These, he points out, consist mainly of nitrogen and phosphorus, high levels of which have adverse effects on natural waters. Two thirds of the residues of medicines in wastewater also come from urine – which only accounts for one per cent of the total wastewater volume. Clearly, if urine was separated at source, the resources required to operate treatment plants could be significantly reduced.

In theory, better use could also be made of faeces and urine – as fertilizer or fuel. Here, however, various issues still remain to be resolved. One of the main problems is the safe and effective removal of pathogens. In addition, there is a lack of fully developed methods for separating faeces and urine and extracting the desired nutrients. Etter notes: “The nitrogen we need for agricultural fertilizers is currently obtained in a very roundabout way. It’s extracted from air at huge industrial plants. At the same time, gigantic efforts are made to remove it from wastewater. It would be desirable to be able to close this cycle more effectively.”

It’s clear from the above why the NEST building, rather than having a single drainage system, has six separate wastewater pipes – one each for black water, urine, rainwater, light grey water (from showers) and heavy grey water (containing grease, from kitchens) and, as a precaution, a conventional pipe connected to the sewer system. Thanks to the separate wastewater streams, it is possible to investigate specific questions and to develop solutions for reducing water consumption, reusing non-drinking water and recovering nutrients from wastewater. Etter believes that, at some point in the future, large buildings in Switzerland may well have their own wastewater treatment systems and no longer be dependent on the sewer network: “Although that’s still a long way off, the trend should and will be in that direction.” Ideas have already been proposed for pilot projects, but they are not yet ready for implementation.

An experimental building known as NEST (Next Evolution in Sustainable Building Technologies) is currently under construction at the Dübendorf site of Empa and Eawag. The four-storey building will be used by the two institutes – together with industrial and scientific partners – for research on new forms of living and working, innovative construction methods and energy-efficient technologies. NEST consists of a central structure (backbone) and exchangeable modular units.

From spring 2016, these units will be used by international research teams to test apartments, offices and conference rooms under real-life conditions. In this process, errors and wrong turns are permitted and even welcomed. NEST will be permanently occupied as a guest house, and the office units used on a daily basis. When a project is completed, the unit in question will be removed from the building and replaced by a new one. The partner institutions participating in the NEST project alongside Empa and Eawag are ETH Zurich, EPFL and Lucerne University of Applied Sciences.

In the Eawag-led Water Hub project, water and wastewater recycling systems are to be tested and developed. This project should also help to refine solutions for reducing water consumption and recovering nutrients from wastewater. The official opening ceremony for the NEST building, which is to be attended by Federal Councillor Johann Schneider-Ammann, will take place on 23 May 2016.


Fig. 2: The urine separation and treatment technology developed in the VUNA project is also being used in the Water Hub project. In a nitrification and distillation system, nutrients are recovered from source-separated urine to produce a fertilizer.
(Photo: Eawag)

However, Eawag aims not only to optimize wastewater management in this country, but also to improve the situation in developing countries and in regions affected by water scarcity. Worldwide, more than two billion people lack access to safe sanitation; this poses threats to the environment as well as human health.

In its research in NEST, Eawag can draw on the experience accumulated in a variety of earlier projects (Fig. 2). These include the development of the Blue Diversion toilet, which in 2014 won the International Water Association’s Project Innovation Award for applied research.

In Eawag’s headquarter building – Forum Chriesbach, just 200 metres from NEST – urine source separation has already been practised for eleven years. The recycled fertilizer produced by Eawag using a newly developed method recently received official approval from the Federal Office for Agriculture for use on flowers, ornamentals or lawns. The NEST building will offer Eawag and its partners further scope for innovations of this kind.