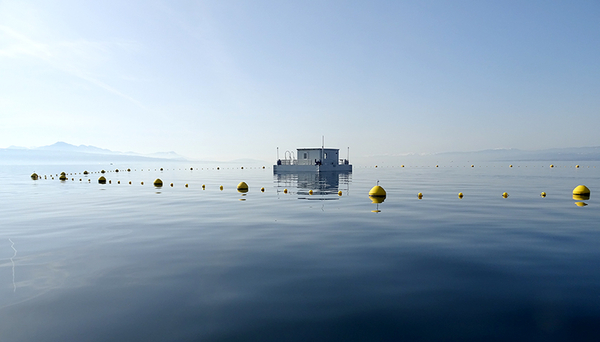 As of this week, “LéXPLORE”, a 100 metre research platform, is afloat on Lake Geneva. On board are countless radiosondes and sensors which should enable researchers at Eawag, EPFL and the Universities of Lausanne and Geneva to gain a better understanding of the ecological processes at work in Lake Geneva as well as the interactions between the water and the atmosphere.

Our lakes are unique resources for us and for nature, providing water for drinking and irrigation, habitats for fish, plants and small animals, and space for relaxation and fun. But these sensitive ecosystems are under pressure. In addition to the problems associated with changing land use and inputs of nutrients and pollutants, climate change is also affecting the lakes in our Alpine regions. With the lake waters becoming increasingly warmer, lake water layering is become ever more pronounced, and the composition of the plankton is changing. Researchers are concerned that blue-green algae (cyanobacteria) will spread and increase significantly in the future, and that this will affect drinking water and the fishing industry. “Lakes pay no heed to national boundaries in acting as sensitive early warning signals for environmental change”, says aquatic physicist and Eawag director Johny Wüest, who initiated the "LéXPLORE" project together with his colleague Bas Ibelings from the University of Geneva.

The research team intends to use "LéXPLORE" to probe into these changes and the science behind them. “This platform is the most cutting-edge floating lake-research station in the world”, says limnologist Natacha Pasche, who is leading the project at EPFL. The research station will operate near Pully (canton of Vaud) until the year 2026, revealing hourly, seasonal and long-term changes. The project team wants to work with the lake users: professional fishermen, boating and ferry trade, environmental protection and public authorities, as well as researchers and others with an interest should be able to make use of the data and new findings straight away.

A technological work of art

After the researchers had tested the platform through its paces in the Bouveret canal in December 2018, it is now anchored in the lake. “That wasn’t exactly easy”, stresses Natacha Pasche, as the lake is up to 110 metres deep in some parts. All the measurement instruments and dozens of sensors will now be installed over the coming months. These will include a weather station, which will record daily temperatures and winds, while sensors will detect current speeds in the water as well as light, turbulence, oxygen, carbon dioxide, various algae groups and a wide range of natural and artificial substances. “It could take a while before everything is working perfectly”, says Pasche. “But I and my fellow researchers can hardly wait to get started with the measurements and finally coax the lake to give up its secrets.”

LéXPLORE is a joint project between Eawag, EPFL and the Universities of Geneva and Lausanne. The project team will be working closely with interest groups such as the International Commission for the Protection of Lake Geneva (CIPEL). The platform is intended to be accessible to all interested aquatic researchers, and particularly also to partners in France. In addition, all members of the public will have real-time access to the online data, including meteorological conditions, lake temperature and water quality.