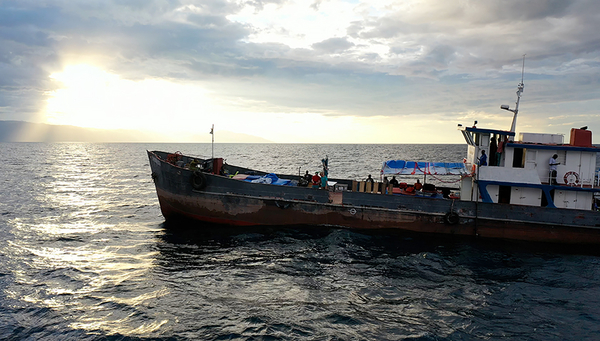 A community of sulfur bacteria grows in the northern basin of Lake Tanganyika and plays a key role in the lake's nitrogen cycle. With climate change, the deep blooms could expand southward, a new study shows. This could have drastic consequences for regional fisheries.

Lake Tanganyika in Africa is one of the largest freshwater lakes on earth and provides a critical source of fish to millions of people in the surrounding region. There is therefore considerable interest in how the lake will develop in the future, especially in view of expected climate change. A team of researchers from the aquatic research institute Eawag, in close collaboration with experts from the Tanzania Fisheries Research Institute (TAFIRI), has therefore set out to examine the lake in detail. Together, they are on the trail of a puzzling phenomenon in the depth of the lake: beneath the calm surface waters of Lake Tanganyika, a community of sulfur bacteria is quietly growing and blooming.

Sulfur bacteria are phototropic organisms, which means they can use light energy directly for their metabolism. However, the community in Lake Tanganyika is exceptional in that it can still photosynthesize even in vanishingly low-light conditions forming a stable community at depths of about 150 meters in the northern basin of the lake. Moreover, these bacteria thrive in a part of the water column that is void of oxygen, otherwise known as the oxygen-deficient zone (see figure).

Lake Tanganyika, which is located in east Africa, contains a deep bacterial bloom that is present at 150 m depth, as indicated by the chlorophyll peak (bottom panel). The dotted contour line indicates 1 μM of oxygen, which denotes the start of the oxygen-deficient zone. Photo: Cameron Callbeck, Chlorophyll profile: adapted from the original manuscript.

How does the deep bloom influence the availability of nutrients?

The big question now is whether and how these deep bacterial blooms affect the biogeochemical cycles, especially the nitrogen cycle. After all, nitrogen is a fundamental building block of life and tends to be in short supply in Lake Tanganyika. A lack of nitrogen, however, can have drastic consequences for all levels of the ecosystem - from algae to fish. Now, the very area in the water column where the deep blooms grow, drives an active microbial nitrogen cycle, and significant nitrogen loss. Therefore, understanding the effects of the deep blooms and how nitrogen loss changes over time is an important question for the future of Lake Tanganyika.

The researchers were able to show that sulfur bacteria significantly increase nitrogen loss by converting bioavailable nitrogen such as NOx and NH4+ into nitrogen (N2) gas. This process also removes other nutrients from the biosphere. By disentangling the effects of these deep blooms on nitrogen cycling in Lake Tanganyika the study, recently published in Nature Communications, may provide a better understanding of how nitrogen loss is regulated in other similar aquatic ecosystems.

Climate change is now additionally interfering with this ecosystem. "If wind velocities decrease and water temperatures increase as predicted, then we would expect the deep blooms in the north to expand southward to the other side of the lake," say the study's lead authors Cameron Callbeck and Benedikt Ehrenfels of Eawag's Department Surface Waters. "Such an expansion would ultimately accelerate nitrogen loss with potential negative implications for fish catches."

In marine and freshwater oxygen-deficient zones, the remineralization of sinking organic matter from the photic zone is central to driving nitrogen loss. Deep blooms of photosynthetic bacteria, which form the suboxic/anoxic chlorophyll maximum (ACM), widespread in aquatic ecosystems, may also contribute to the local input of organic matter. Yet, the influence of the ACM on nitrogen and carbon cycling remains poorly understood. Using a suite of stable isotope tracer experiments, we examined the transformation of nitrogen and carbon under an ACM (comprising of Chlorobiaceae and Synechococcales) and a non-ACM scenario in the anoxic zone of Lake Tanganyika. We find that the ACM hosts a tight coupling of photo/litho-autotrophic and heterotrophic processes. In particular, the ACM was a hotspot of organic matter remineralization that controlled an important supply of ammonium driving a nitrification-anammox coupling, and thereby played a key role in regulating nitrogen loss in the oxygen-deficient zone.
See DOI
See Institutional Repository
Callbeck, C. M.; Ehrenfels, B.; Baumann, K. B. L.; Wehrli, B.; Schubert, C. J. (2021) Anoxic chlorophyll maximum enhances local organic matter remineralization and nitrogen loss in Lake Tanganyika, Nature Communications, 12, 830 (11 pp.), doi:10.1038/s41467-021-21115-5, Institutional Repository