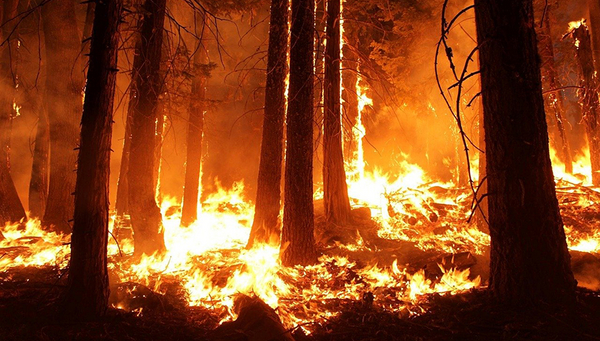 To protect ecosystems, it is important to understand how environmental disturbances, such as forest fires or hurricanes, affect nature. A study by Eawag and the University of Zurich now shows how their frequency and intensity affect small and large organisms. Accordingly, large species are more affected by disturbances than small species, and this influences the size distribution within ecological communities.

A fundamental characteristic of ecological communities is that small animals are more abundant than large ones. These “ecological pyramids” are found in both terrestrial and aquatic systems. Depending on the position of the organisms in the pyramid, their ecological functions differ and they react differently to human impact. For example, scientists have extensively studied how fisheries affect the size distribution of fish in marine systems. However, a general understanding of other ecosystems is still lacking.

“Understanding how ecological communities respond to disturbances is essential in view of global environmental changes,” says Claire Jacquet, a postdoc in the Eawag "Spatial Dynamics" group, which is headed by Florian Altermatt, Professor of Aquatic Ecology at the University of Zurich.

The team at Eawag and the University of Zurich has now shown that large organisms suffer much more from environmental disturbances than small organisms. The more frequently disturbances occur, the more this effect is intensified and in particular the probability increases that large species become extinct and the size distribution of the communities of species changes.

To investigate the dynamics of ecological communities, the researchers combined two complementary approaches. Firstly, they developed a mathematical model. This calculates the biomass of communities when they are exposed to disturbances of varying frequency and intensity.

Secondly, the team verified the results of the mathematical model in the laboratory. They studied aquatic communities composed of 13 protist species (protozoa) and several freshwater bacterial species, the sizes of which varied by several orders of magnitude. They exposed these microcosms to disturbances of varying frequency and severity by selectively increasing the mortality of the communities of species. In this way, natural environmental disturbances can be imitated.

The researchers then determined the total biomass of the mini-ecosystems and the incidence of the individual species. These controlled experiments allowed them to formulate conclusions that could be generalised.

Microcosms: Each vial contains communities of species that have been exposed to disturbances of varying intensity and frequency.
(Photo: Claire Jacquet)

The laboratory results corresponded with the mathematical model. They show that less frequently occurring disturbances have less influence on the shape of the ecological pyramids than those that occur more frequently or with a higher intensity. In addition, small organisms were better able to survive disturbances than large organisms.

The scientists explain this dynamic as follows: Small animals reproduce much faster than large ones, meaning that the time between two generations is shorter. “The reproduction rate also determines how quick animals can respond to changes of their environment”, explains Claire Jacquet. Accordingly, large animals need more time between two disturbance events to recover completely compared to small animals.

“Our study can be applied to a broad spectrum of realistic scenarios,” says Florian Altermatt. “It is only this understanding that allows us to mitigate the effects of disturbances in natural systems”.