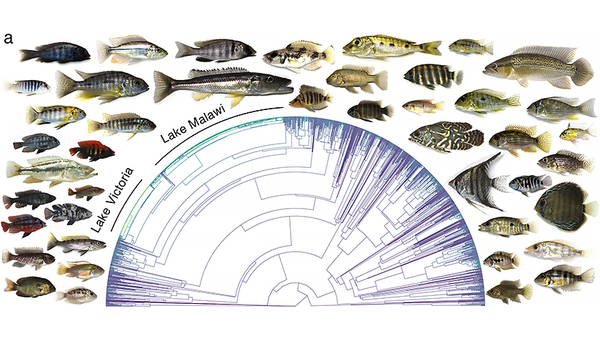 Using genomic analyses of 100 cichlid species, scientists from Eawag and the University Bern, together with co-workers in Australia, the UK, Tanzania, Uganda and the US, have investigated the striking variation observed in cichlid fish speciation rates. Their findings show that exchanges of genetic variants between existing species dramatically accelerate the development of new species – given favourable ecological conditions.

Evolution depends on genetic mutations: if numerous random mutations accumulate in a population, a new species may emerge. Speciation of this kind takes millions of years. If a young species develops under selection pressure, the process may be more rapid; in such cases, however, only two new species will usually be formed from one progenitor, as alternative genetic variants get eliminated in the process and the evolutionary potential is thus exhausted. But in the geologically young Lake Victoria, around 500 new cichlid species have evolved over the past 15,000 years. In a study just published in Nature, the question how this is possible is explored by a group of Eawag and University of Bern scientists led by evolutionary and fish biologist Ole Seehausen.

Cichlids are a textbook example of the process known as adaptive radiation, in which organisms rapidly diversify to form new species, adapted to different ecological niches. As the world’s second-largest vertebrate family, cichlids are clearly not averse to speciation. However, of the 1712 cichlid species that had been scientifically described by 2019, many developed less than rapidly or even extremely slowly. In other words, rapid speciation cannot be said to be simply a characteristic of cichlids.

Joana Meier, a postdoctoral researcher involved in the project, points out that ecological diversity can promote a high level of species diversity, but also emphasises: “Favourable ecological conditions are not sufficient to explain why adaptive radiation in Lake Victoria was 10,000 times more rapid than in most other lakes.”

In previous studies, Seehausen’s group showed that the rapid cichlid radiation was due to the earlier hybridisation of two distantly related lineages, which came into contact again around 150,000 years ago after several million years of geographical separation; subsequently, their descendants are believed to have been repeatedly isolated and brought together again in hybrid swarms during the turbulent period leading up to the formation of Lake Victoria and its modern fauna.

In the latest study, the researchers analysed the genomes of 100 cichlid species from the Lake Victoria radiation, representing all the various genera, feeding habits and morphologies. This data was compared with genomic data from 20 slowly or less rapidly speciating cichlids from eight other lakes, and with literature/digital repository data on all known cichlid species.

Indels in the spotlight

The new data showed a positive correlation between the speciation rate and the number of indels found in the genome. Indels are short DNA sequences containing base pair insertions or deletions, which may be absent in one species while one or more copies are present in closely related species; they are more difficult to detect than base pair replacements (i.e. point mutations) and have tended to play a minor role in evolutionary theory to date.

The researchers found thousands of indels between the genomes of any two species in the rapidly speciating Lake Victoria flock,. In the “slower” lineages from other lakes, the density of indels in the genome that had accumulated between species per unit time was lower; they had evidently accumulated more slowly – and the rate of speciation was correspondingly slower.

“Use it or lose it” potential

Investigations of the function of Lake Victoria indels revealed that they were significantly associated, in many cases, with variation in diet, habitat and male nuptial coloration. This means that the Lake Victoria cichlids could draw on an indel pool which was not only large but also contained variants important for speciation – directly, through mate choice, or indirectly, through specialisations enabling the fish to occupy new ecological niches. Many of these indels are much older than Lake Victoria or its cichlids and probably arrived in the common ancestor of the radiation through ancient hybridization with other cichlids. Together with the many point mutations that were brought together by ancient hybridisation too, an enormous genomic potential arose.

In a homogeneous environment, this potential would probably soon have disappeared; if genomic variants are not used, they are easily lost – either through chance or uniform selection pressure. But over the last 15,000 years, the large new Lake Victoria evidently offered a wide variety of ecological opportunities and, at a stroke, the fish were able to utilise hundreds of different variants for new – sometimes highly complex – specialisations.

For example, some specialised in scraping firmly attached algae from rocks in clear water close to the shore, while others developed an acute visual capacity enabling them to prey on other fish in the murky deep waters – thanks to gene variants that had been selected much earlier for these specialisations, copies of which were available “ready for use” by young species after the hybridisation.

As these genomic variants facilitated vital specialisations, complementary sets were maintained in the different species and could be recombined again after hybridisation, leading to the evolution of further new species.

Ole Seehausen says: “We’ve started to develop a model which uses networks rather than phylogenetic trees to describe the evolution of new species. In these networks, not only do new genomic variants arise, but new and old genetic material can be exchanged between species for a very long time. As a result, much more genetic material is available for evolution at all times.”

To what extent this model can also be used to explain different speciation rates in other fish is currently being investigated by scientists at Eawag and the University of Bern – for example, with regard to the whitefish radiation which occurred in prealpine lakes after the last ice age.

The ecological and genomic basis of explosive adaptive radiation

Speciation rates vary considerably among lineages, and our understanding of what drives the rapid succession of speciation events within young adaptive radiations remains incomplete. The cichlid fish family provides a notable example of such variation, with many slowly speciating lineages as well as several exceptionally large and rapid radiations. Here, by reconstructing a large phylogeny of all currently described cichlid species, we show that explosive speciation is solely concentrated in species flocks of several large young lakes. Increases in the speciation rate are associated with the absence of top predators; however, this does not sufficiently explain explosive speciation. Across lake radiations, we observe a positive relationship between the speciation rate and enrichment of large insertion or deletion polymorphisms. Assembly of 100 cichlid genomes within the most rapidly speciating cichlid radiation, which is found in Lake Victoria, reveals exceptional 'genomic potential' - hundreds of ancient haplotypes bear insertion or deletion polymorphisms, many of which are associated with specific ecologies and shared with ecologically similar species from other older radiations elsewhere in Africa. Network analysis reveals fundamentally non-treelike evolution through recombining old haplotypes, and the origins of ecological guilds are concentrated early in the radiation. Our results suggest that the combination of ecological opportunity, sexual selection and exceptional genomic potential is the key to understanding explosive adaptive radiation.
See DOI
See Institutional Repository
McGee, M. D.; Borstein, S. R.; Meier, J. I.; Marques, D. A.; Mwaiko, S.; Taabu, A.; Kishe, M. A.; O'Meara, B.; Bruggmann, R.; Excoffier, L.; Seehausen, O. (2020) The ecological and genomic basis of explosive adaptive radiation, Nature, 586, 75-79, doi:10.1038/s41586-020-2652-7, Institutional Repository
Created by Sibylle Hunziker
Share with others: