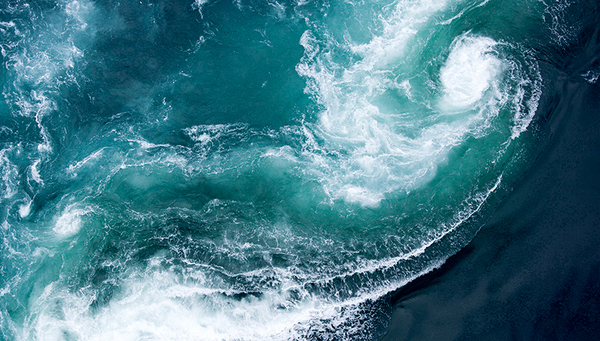 The chaotic behaviour of vortices is one of the things that makes weather forecasting so difficult. Researchers at ETH Zurich, Eawag and WSL, together with international partners, have now developed a novel experimental method that enables more accurate analyses of the movement and energy of turbulence in fluids with much less effort.

Turbulence is one of the most important and at the same time one of the least understood phenomena in nature. Weather, flow conditions in bodies of water and in industrial chemical or biological reactors, the bloodstream: wherever liquids and gases are in motion, hierarchies of vortices determine how energy propagates and what effects it has locally. The limitations of current predictive models are due in large part to the limited understanding of turbulence and its interactions with other factors.

Researchers at ETH Zurich, Eawag and Swiss Federal Institute for Forest, Snow and Landscape Research WSL together with partners from other research institutions, have now developed a novel experimental method to measure the energy of vortices in fluids much more accurately and, above all, more simply – on scales ranging from a few millimetres to hundreds of metres. The method paves the way for much better predictions and has the potential to help take our understanding of chaotic motion to the next level.

Markus Holzner and Stefano Brizzolara of the Environmental Fluid Mechanics group – a joint interdisciplinary research unit of the Eawag and the WSL– have tackled the problem of turbulence measurement with a completely new approach. While previous methods tracked the movements of spherical marker particles, the scientists’ new procedure detects the movements of the ends of rigid fibres floating in the liquid. What appears to be a small change in the experimental setup has enormous implications for measurement effort and accuracy.

The ends of a fibre provide the necessary data

The major difference with the new method is that the rotations of the ends of a single fibre provide all the statistical data necessary to characterise a vortex’s motion and energy. Until now, the researchers had to use a high number of marker particles, and this amount was constantly rising. This is because floating spheres automatically distribute themselves in a liquid and the mean distance between them increases rapidly as a result of turbulent diffusion.

In laboratory settings, however, where researchers record 3D particle motion in transparent measuring boxes filled with water, this ever-increasing number of measuring particles pushes camera detection to its absolute limits. If there are more than 10,000 particles, they too often obscure each other, so the resolution of the measurements cannot be increased any further.

Analysing currents and eddies in the open sea with the conventional method calls for a large number of tracer buoys, which constantly drift away. Not only does this high quantity plus the ongoing replacement of the buoys incur high material costs, but the time required also rises accordingly, Holzner explains. But if the buoys are connected by cables, essentially forming giant fibres, they can no longer drift away from each other.

Rigid fibres rotate along with the liquid

To prove the practical relevance of the principle, the researchers have tested their system in a series of rigorous experiments. This involved using a 3D particle tracking velocimetry system like the one used for spherical particle analysis. Among other things, the team was able to show that results using rigid fibres are just as robust as those from flexible ones.

However, the fixed geometry reduces the calculation effort considerably. The reason for this is that the solid fibre always rotates at the speed of the vortex, since viscosity prevents the fluid from sliding over a solid fibre. In contrast, flexible fibres not only rotate with the swirling motion of the fluid, but they also bend and vibrate at a similarly large frequency.

From tides to heart valves

According to Holzner, a major advantage of the fibre measurement method is its extraordinary transferability to all size ratios relevant to vortex phenomena, from a few millimetres to several hundred metres. For example, to analyse eddies in the ocean, the fibre can be created with two GPS‑equipped buoys that mark the ends and are connected by a cable about a hundred metres long. Measurements of the buoy movements can then be used to, for example, calculate predictions of how spills of oil or plastic waste will spread.

At the other end of the scale are heart valves, where vortex formation can cause health problems. Here, it is possible to experiment with fibres in the millimetre range in silicone models, for example.

An open door to new insights

In initial presentations of the research at scientific congresses, Brizzolara has found that the fibre method inspires other researchers. One wants to adapt the system to a large-scale physical model for tidal simulations, while others are planning experiments with specific arrangements of multiple fibres.

In the previous lab setup, scientists had to track the movements of thousands of spherical particles, which often obscured each other.
(Photo: Holzner Lab / Environmental Fluid Mechanics - EFM)

Created by ETH Zürich, Daniel Meierhans
Share with others: