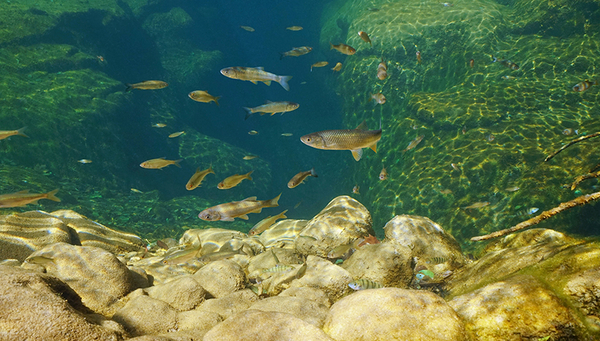 Microplastics, owing to their chemical properties, can carry micropollutants into a fish’s digestive system where they are subsequently released through the action of its gastric and intestinal fluids. Scientists of EPFL and Eawag, working in association with other research institutes, have studied this process by looking specifically at progesterone – often pointed to as an endocrine disrupter.

When fish ingest microplastics, they often also ingest progesterone. This compound is subsequently released into the digestive tract through chemical reactions with the fish’s digestive fluids. That’s the key finding of a study carried out jointly by scientists from EPFL, the Swiss Federal Institute of Aquatic Science and Technology (Eawag), Peking University in Beijing, and Oklahoma State University, and appearing in Environmental Science: Processes & Impacts.

“Our study shows that microplastics are an additional vector for exposing fish to micropollutants like progesterone, a steroid hormone that can be found in the environment,” says Florian Breider, the head of EPFL’s Central Environmental Laboratory and a co-author of the study. “These microplastics act like sponges and serve as a vector – they readily absorb hydrophobic micropollutants in water, since the pollutants’ molecules would rather attach to the plastic,” says Breider. “Once inside a fish, the molecules are released into its digestive tract as a result of the physical and chemical properties of the digestive fluids. Today, nobody knows whether the micropollutants subsequently pass through the intestinal walls and spread to the rest of the fish.”

The study looked at microplastics made of three kinds of polymers: polyethylene, polypropylene and polystyrene. These types of microplastics are widely found in Swiss rivers and lakes. The scientists examined the polymers’ adsorption capacity, or how well they attract and bind to micropollutants like progesterone, and their desorption capacity, or how quickly and easily they can release micropollutants into a fish’s digestive tract. This enabled them to determine how the progesterone molecules behave across the entire cycle.

Several studies have already been carried out on highly hydrophobic micropollutants such as polychlorinated biphenyls (PCBs). But in this study, the scientists found that progesterone – which is much less hydrophobic – behaves the same way in the presence of microplastics. What’s more, progesterone is released into digestive fluids to a greater extent. This indicates that the ingestion of microplastics could play a significant role in exposing aquatic organisms to progesterone, an endocrine disrupter. The scientists estimate that “if an organism weighing one kilogram ingests 4.5 liters of water per day, this vector of progesterone exposure – that is, through microplastics – would account for 10% of its daily progesterone intake due to water ingestion,” says Breider.

More research needs to be done on how micropollutants carried by microplastics affect aquatic ecosystems and ultimately human beings. Few studies have been carried out so far, especially on freshwater organisms in Switzerland. That’s probably due to the country’s landlocked geography. “In countries bordering a sea or ocean, research on plastic contamination and the associated micropollutants is becoming a priority. But that’s not the case in Switzerland,” says Breider. “However, people are becoming increasingly aware of the issue and eager to take action. Things are moving in the right direction.”

The sorption of hydrophobic organic compounds (HOC) onto microplastics is relatively well reported in the literature, while their desorption remains poorly investigated, especially in biological fluids. The present study investigated the sorption and desorption of progesterone on polyethylene (PE), polypropylene (PP), and polystyrene (PS) microplastics. The sorption experiments showed that the equilibrium was reached in a few hours for all plastics. A sorption efficiency of 357.1 μg g-1 was found for PE and PS, and 322.6 μg g-1 for PP. Sorption experiments indicated that adsorption would certainly happen via surface sorption and a potentially pore-filling mechanism. The desorption was carried out in Simulated Gastric Fluid (SGF) and Simulated Intestinal Fluid (SIF), whose formulations were more complex than similar models reported so far. It has been found that the desorption was higher in SIF as compared to SGF, due to micelle formation in SIF promoting the pollutant solubilization. The sorption of pepsin onto microplastics has also been revealed, suggesting a competition between pollutants and pepsin for sorption sites and a potent reduction in pollutant solubilization. This study indicates that the ingestion of microplastics could be considered as an additional route of exposure to pollutants and therefore emphasizes pollutant bioavailability for aquatic organisms.
See DOI
See Institutional Repository
Siri, C.; Liu, Y.; Masset, T.; Dudefoi, W.; Oldham, D.; Minghetti, M.; Grandjean, D.; Breider, F. (2021) Adsorption of progesterone onto microplastics and its desorption in simulated gastric and intestinal fluids, Environmental Science: Processes and Impacts, 23(10), 1566-1577, doi:10.1039/D1EM00226K, Institutional Repository

Created by EPFL and Claudia Carle (Eawag)
Share with others: