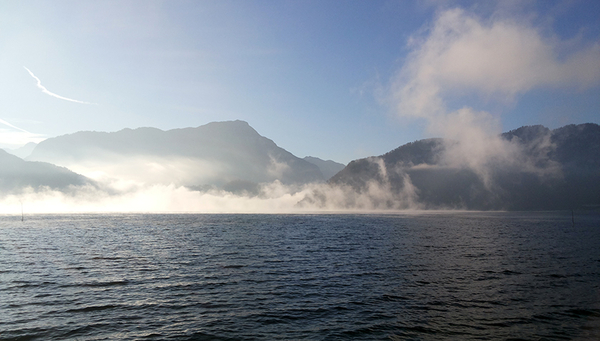 Climate warming is not the only cause of temperature changes in lakes, rivers and other bodies of water. The use of waterbodies for heating and cooling also leads to increases or decreases in water temperature. There has been little research to date, however, on how this affects aquatic ecosystems. This lack of understanding has been highlighted by a recent literature review carried out at Eawag and the University of Bern.

Bodies of water are increasingly being used as thermal sources for heating or cooling of buildings or industrial processes. For heating purposes, warmth is extracted from the water, which is then discharged back into a lake or river at a lower temperature. The Würth AG company in Rorschach, for example, heats its buildings with warmth from Lake Constance. The opposite applies when waterbodies are used for cooling; the waste heat warms the water, which is then discharged at a higher temperature into the river or lake. One example of such a system is the Mühleberg nuclear power plant near Bern, which is cooled by water from the Aare. Earlier studies have shown that the river water is warmed by 0.7°C in summer and up to 2.4°C in winter. Cases with such magnitudes are referred to as “thermal pollution”.

In 2017, Eawag researchers were commissioned by the Federal Office for the Environment to assess the thermal use potentials of 36 lakes, 57 rivers and 9 lake outlets and to present their findings in visual form. Their estimates show that Lake Lucerne, for example, can provide c. 2900 gigawatt hours (GWh) of energy annually. The heating requirements of 100,000 residents amount to 700 to 900 GWh. The lake could thus theoretically provide the entire region with heating and cooling.

But what influence does temperature change have on aquatic ecosystems? “This is a vital question, as water temperature is a key factor for the processes that play out in these habitats”, says Eawag’s Adrien Gaudard. In order to estimate the consequences of thermal use and to minimise possible deleterious effects, a thorough knowledge of the processes and risks involved in thermal exploitation is essential. Researchers at Eawag and the University of Bern have thus carried out a review of the literature to assess the physical, chemical and ecological effects on lakes and rivers.

Many processes are affected

“Temperature change affects a multitude of processes in waterbodies – including water circulation and chemical reactions”, says Adrien Gaudard, who was involved in the review. Water masses and nutrients are redistributed and oxygen content can change. Daphnia, snails, fish and other organisms react to temperature fluctuations, altering their eating habits or adjusting their metabolic rate. “Our literature review identified very few specific, large-scale impacts of thermal use in existing cases – however, they were not always thoroughly investigated”, says Gaudard. The researchers were not able to deduce the extent of temperature change that can be borne by an ecosystem from the available data. Gaudard explains: “The consequences of temperature fluctuations from thermal use are difficult to consider in isolation.”

Nevertheless, the literature review did allow certain conclusions to be drawn: For example, the quantity of thermal energy that is extracted from a waterbody is an all-important factor, as is the manner in which this happens. “In the context of climate change also, cooling the water generally has a lesser effect than warming it,” notes Gaudard. Aquatic organisms react less sensitively to cooling, and the effects of climate change on the waterbody are mitigated. The most fragile situation is one in which the waterbody is used in summer for cooling, and is thereby warmed. This exacerbates the impacts of climate change and heat stress on the organisms.

If a lake is used in summer for cooling and in winter for heating, the change in temperature over the whole year is less pronounced. “This was demonstrated by an earlier model study of Lake Constance,” says Gaudard. Local impacts can also be minimised if the water is discharged into the waterbody at locations where the difference in temperature from that of the surrounding water is lowest: if water for cooling is taken in summer from deep layers of the lake, it should be discharged into a higher, warmer layer. “On the other hand, this method means that water is relocated, and so it is important to ensure that important nutrients are not also redistributed”, adds Gaudard.

The seasonal temperature of a waterbody varies from year to year. If temperature fluctuations caused by thermal exploitation are much smaller than these natural variations, the ecological impact that can be expected is negligible. Unfortunately, current legislation in this area – of which there is very little in any case – often does not take account of this fact.

Very few countries pay attention in their legislation to the species found in a particular body of water. The Swiss Water Protection Act is an exception: it specifies that the temperature of a river can only be altered by up to 1.5°C in areas with trout; outside these regions 3°C is allowed. Irrespective of these standards is the requirement that heat discharge cannot change the water quality to such an extent that the typical communities of organisms in a body of water can no longer thrive. The researchers welcome these specific provisions: “In order to take account of the diversity of aquatic habitats, these need to be recognised in law”, says Gaudard.

With the exception of the nuclear power plant cooling processes in Mühleberg and Beznau, current and planned installations for thermal use change the water temperature relatively little, mostly in the order of one hundredth of a degree Celsius. “Climate change and, in many places, hydropower utilisation, wastewater treatment plants and urban drainage have a much greater impact”, explains Gaudard. In order to estimate how great a temperature change a waterbody can bear, we also need to know how the inputs of warm water are distributed and whether local ecological effects also have a more widespread impact. “The topic of ecosystem functions has not been sufficiently researched, either”, adds Gaudard. “For example, can a lake fulfil its function as a drinking water source if it is warmed or cooled too much?” A broad view of all these factors becomes more important particularly in regard to the great potential of thermal use. Rather than evaluating a single case, Gaudard advises taking whole catchment areas into account, “not only to protect the ecosystems in the waterbodies but also from the point of view of fairness”, he says. Industry or communities cannot heat the upper courses of flowing waters so much that no further use is possible further downstream.

The extraction and disposal of heat from lakes and rivers is a large yet scarcely exploited source of renewable energy, which can partly replace fossil fuel heating and electrical cooling systems. Its use is expected to increase in the near future, which brings attention to the impacts of discharging thermally altered water into aquatic systems. Our review indicates that thermal discharge affects physical and ecological processes, with impacts recorded at all levels of biological organization. Many in situ studies found local effects of thermal discharge (such as attraction or avoidance of mobile organisms), while impacts at the scale of the whole water body were rarely detected. In complex systems, diffuse impacts of thermal discharge are difficult to disentangle from natural variability or other anthropogenic influences. Discharge of warm water in summer is likely to be most critical, especially in the context of climate change. Under this scenario, water temperatures may reach maxima that negatively affect some species. Given the diversity and complexity of the impacts of thermal pollution on aquatic systems, careful planning and judicious management is required when using lakes and rivers for extraction and disposal of heat. We discuss the drivers that influence the severity of potential impacts of such thermal use, and the options available to avoid or mitigate these impacts (such as adapting the operating conditions).
See DOI
See Institutional Repository
Gaudard, A.; Weber, C.; Alexander, T. J.; Hunziker, S.; Schmid, M. (2018) Impacts of using lakes and rivers for extraction and disposal of heat, Wiley Interdisciplinary Reviews: Water, 5(5), e1295 (18 pp.), doi:10.1002/wat2.1295, Institutional Repository

Principle of heating using lake water: Lake water is fed into a heat exchanger, where it warms the liquid in a secondary cycle. With the help of a heat pump, this energy is used to heat a building, while the cooled water flows back into the lake.