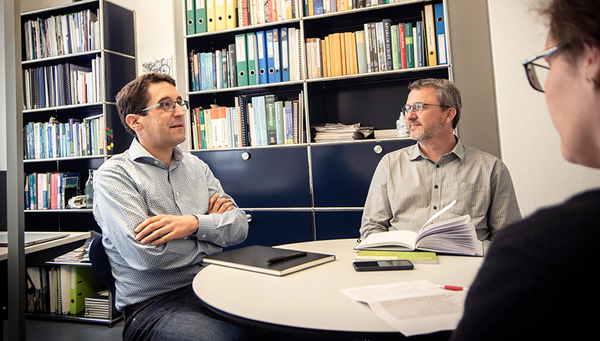 Researchers Christoph Vorburger and Florian Altermatt talk about the importance and state of aquatic biodiversity in Switzerland and Eawag’s commitment to conserving natural biodiversity.

Prof. Christoph Vorburger is a biologist and heads the Aquatic Ecology department at the aquatic research institute Eawag. He is also adjunct professor at the Institute of Integrative Biology at ETH Zurich.

Prof. Florian Altermatt is also a biologist, a research group leader at Eawag, an associate professor of aquatic ecology at the University of Zurich and president of the SCNAT Swiss Biodiversity Forum.

What does biodiversity mean to you personally?

Christoph Vorburger: For me, it is what I enjoy in nature. When I am somewhere with abundant biodiversity, I feel at home.

Florian Altermatt: Biodiversity is one of the most fascinating aspects of life for me. The diversity of species made me want to study biology. I cannot imagine our life without biodiversity.

How exactly do you define biodiversity?

Christoph Vorburger: There are different forms of biodiversity. The most obvious, of course, is the number of species. Within the species, there is also the genetic diversity that is needed for new species to emerge over time.

For example: in the case of a parasitic wasp that attacks caterpillars, genetic methods were used to find that what at first glance looked like a single species was actually several species. Each species was specialised in a different type of caterpillar. Individuals of a species also differ to some extent in the symbionts with which they live together, such as the bacteria in their gut. And at a higher level, there is also the diversity of communities and ecosystems. These are all forms of biodiversity.

Florian Altermatt: Within these categories, there is much that is still unexplored. We don’t know, for instance, how big these categories are and how much they change. We don’t even know exactly how many species exist. In Switzerland, we don’t know whether there are 45,000 or 60,000 insect species. In the case of amphipods, in the last five years, we have newly identified a third of the species in Switzerland; before that, it was a black box, especially for the species found in groundwater. Although we are sometimes moving blindly through the world of biodiversity, we also have to protect it.

What is threatening biodiversity?

Christoph Vorburger: The most important reason is clearly the loss and fragmentation of habitat. Other reasons include overuse, nitrogen and phosphorus pollution, pesticides, climate change and invasive species.

Florian Altermatt: Often it is not just one of these factors, but several acting at the same time and mutually reinforcing each other.

Christoph Vorburger: They are all anthropogenic factors, which converge where the most people are present.

So without humans, biodiversity would not change?

Florian Altermatt: Yes, it would, but much less rapidly and less intensively. Generally, biodiversity increases over geologically prolonged periods of time. However, there have been a handful of massive environmental changes, each of which has led to a mass extinction. These were, for example, the impact of a meteorite or global atmospheric changes, such as when organisms suddenly started producing oxygen. But now it is humans who are triggering such a massive change.

What does the loss of biodiversity mean for humans?

Florian Altermatt: Human life is not possible without biodiversity. However, a certain loss can probably be tolerated. But where is the limit? Our food, our health, our water, even our sense of well-being: all of this depends on biodiversity. The more diverse a habitat is, the better it can store and purify water, for example.

Florian Altermatt: Biodiversity loss also has negative economic consequences, which have been clearly highlighted by the World Economic Forum (WEF). The risk of biodiversity loss for economic performance was identified by the WEF as one of the biggest risks faced by society. A major problem is that biodiversity is not easily restored once it is lost. Sure, new biodiversity will emerge at some point, life will continue, but not in time-frames that will still be relevant for humans.

Christoph Vorburger: For me, biodiversity also has an intrinsic value. Do we humans even have the right to put it at risk? And even if we allowed ourselves this right, we would then be basically losing opportunities for future use if we lost species that we didn’t even yet know about.

What is the current state of aquatic biodiversity?

Christoph Vorburger: It looks even worse than in the terrestrial realm. This is probably because so much habitat change has taken place there. In Europe, there are almost no rivers that run completely naturally any more. Water pollution has also been a major problem in the past. Many species disappeared because the water quality was no longer adequate. There are also many invasive species in inland waters.

Florian Altermatt: The sections of rivers and other bodies of water that are still close to their natural state are not very well interconnected, either. This makes them even more susceptible to biodiversity loss.

Christoph Vorburger: The high degree of isolation and the extensive structuring of water bodies are a risk, but they are also the reasons why these have been able to build up so much biodiversity. However, this is often very local. Whitefish are a good example: there are species that only exist in Lake Brienz. If you destroy this habitat, you also lose these species.

Have the efforts of water protection and revitalisation begun to bear fruit?

Christoph Vorburger: Water quality has improved greatly in terms of nutrients compared to the period of greatest pollution in the second half of the last century, especially in the larger bodies of water. However, habitat diversity in watercourses is only changing slowly. Although there is currently massive investment in revitalisation, making two kilometres of river more natural is already a huge project and is not progressing very rapidly. I am convinced that the effects will be positive, but it is not yet clear when we will be able to measure and show this unequivocally.

Florian Altermatt: Despite the positive measures that are being taken, the negative influences still prevail. For instance, there is still a great need for action regarding micropollutants or pesticides. Smaller bodies of water are particularly seriously affected. In addition, there are also developments in the other direction. Water bodies are being revitalised, but at the same time, hydroelectric power plants are being built in small bodies of water, thereby negatively affecting biodiversity. In other words, water is being bailed out of a boat with a leak, but the hole is not really being repaired. The protection of biodiversity must be tackled at the cause of the problem.

What role is Eawag playing?

Florian Altermatt: Eawag draws up basic information on the status and changes in biodiversity, analyses risk factors and, in some cases, develops solutions to address them. In addition, we are active in both academic education as well as in practical further training. Nowadays, an aquatic chemist working for the federal government or a canton takes biodiversity into consideration, thanks in part to Eawag’s commitment.

Christoph Vorburger: Virtually all Eawag departments are concerned with the topic of biodiversity. To give just a few examples: we are researching methods to measure biodiversity more efficiently, quickly and comprehensively. Eawag has compiled the best existing inventory of fish biodiversity in Switzerland. Models are being developed that provide information about the quality of a habitat on the basis of biodiversity. In the engineering sciences, thought is being given to how urban water management can be designed in such a way that it also makes a contribution to biodiversity. Eawag also plays a really significant role in the revitalisation of watercourses, both in accompanying these projects and in monitoring their success and implementation.

Florian Altermatt: What is also present at Eawag is the awareness that many major challenges in the environmental field cannot just be tackled in silos. It is only possible for engineers or social scientists or economists to take biodiversity into consideration if you have an interdisciplinary approach. This is what we do at Eawag. The Blue Green Biodiversity research initiative, which we launched together with the WSL, consciously networks engineers, social scientists and humanities scholars, chemist and biologists. I am convinced that this will benefit biodiversity.