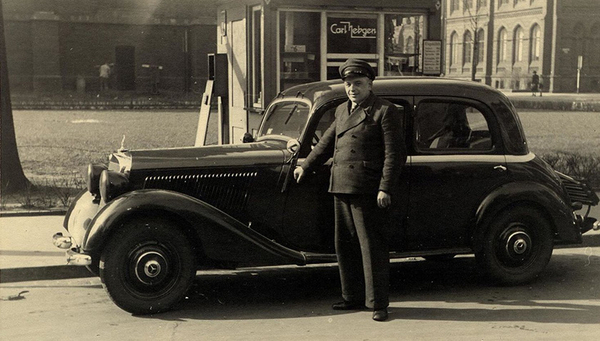 All living organisms that respire have to get rid of electrons. In oxygen-free environments, microorganisms deploy special molecules which act as extracellular electron shuttles to transfer the electrons from cells to minerals. A group of researchers has now discovered what determines the electron transfer efficiency of these “taxi” cars: the energy differences of the transported electrons.

Every living thing requires energy. This is also true of microorganisms. This energy is frequently generated in the cells by respiration, that is by the combustion of organic compounds, in other words: food. During this process, electrons are released which the microorganisms then need to get rid of. In the absence of oxygen, microorganisms can use other methods to do so, including transporting the electrons to minerals outside the cells.

In oxygen-free soils or sediments, iron oxides play a major role as acceptors of the released electrons. But how do the electrons get from respiration in the cells to the iron oxides which are found outside the cells? For this process microorganisms can use special molecules that receive two electrons at the cell surface, and then transport them to the iron oxides like a taxi. There the two electrons alight from the taxi, and reduce trivalent iron in oxides to its divalent form. The taxi is then free to transport more electrons.
These extracellular electron shuttles (EES) have been known about for a long time. Until now, however, it has never been clear why their efficiency is so dependent on their structure and the environmental conditions – and why the speed of the iron oxide reduction varies by several orders of magnitude. All attempts to explain the massive efficiency differences on the basis of known parameters such as pH or temperature have failed until now.

The electrons have to be considered individually

A study by Eawag and ETH Zurich researchers, just published in the journal PNAS (Proceedings of the National Academy of Science of the United States of America), shows how efficiency differences in the EES can be explained by a single, unmistakable relationship. “In our relationship, we didn’t look at the average energy of the two transported electrons as has been done up to now, but rather at the individual energy level of each electron,” reports Meret Aeppli, lead author of the study. Eawag-environmental chemist Thomas Hofstetter adds: “It turns out that the transfer of the first electron from the EES to the iron oxide is often decidedly less energetically efficient than the transfer of the second.” The researchers have shown that the energy difference between the first electron transferred from the EES to the iron oxide determines the iron reduction rate. Using this concept, it is possible to explain the efficiency differences between various EES, even across a sizeable pH range, as well as between two different iron oxides. Michael Sander from the ETH Zurich explains the process with an analogy: “Under many conditions, the first electron is actually very reluctant to leave the EES taxi, but it is pushed out from the back seat, so to speak, by the second electron.”

To arrive at their findings, the authors of the study not only devised their own experiments and to collected the resulting data, but also integrated the results of previous studies. For the experiments in the Eawag and the ETH laboratories, the researchers used natural and synthetic EES molecules and investigated two widely available iron(III) oxides. The rate of electron transfer from the EES to the iron oxide, and thus the efficiency of the electron transport, can be made visible with UV light. This light is absorbed differently by the EES depending on whether they are underway with or without the two electrons.

The study describes just one small step in microbial respiration, but while it may be small, it is critical to many processes. Now that anaerobic respiration of mineral phases using EES is understood at a generic level, comparisons can be made more easily between studies and systems. This paper is therefore a must-read for anyone working with anaerobically-respiring microorganisms and their carbon exchange. While this step may appear to be a small one, it is nevertheless highly relevant for the understanding of global biogeochemical processes – for example the anaerobic breakdown of organic substances in thawing arctic soilsside, a process in which enormous quantities of climate-critical CO2 are released.