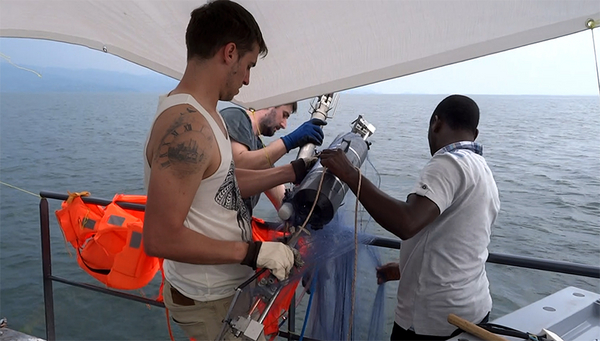 The findings of a new measurement campaign on Lake Kivu in Africa show that, contrary to previous assumptions, the methane concentration in the water is relatively stable or increasing only very slowly. Therefore, the risk of a sudden gas eruption from the lake is currently not increasing.

Photo story of the measurement campaign in March 2018 on Lake Kivu, East Africa. Please click on the photo. (Photos: Eawag)

In the depths of Lake Kivu in the East African Rift Valley, there are some 60 billion cubic metres of methane (CH4) and 285 billion cubic metres of carbon dioxide (CO2). This is unique worldwide and also arouses commercial interest. On the one hand, the methane concentration is so high that several hundred megawatts of electricity may be produced from it over decades. On the other hand, the gas reserves threaten the lives of approximately 2 million people living around the lake. A volcanic eruption in the depths of the lake could lead to a sudden mixing of the entire lake. The gas could suddenly escape and suffocate people and animals.

For many years now, the aquatic research institute Eawag and other institutions have thus been observing and researching how gas concentrations are developing in the lake. Measurements in 2004, in which Eawag was involved, indicated that CH4 concentrations in the lake were continuing to rise. For this reason, research has so far assumed that Lake Kivu could reach gas saturation towards the end of the 21st century and that the danger of spontaneous degassing would steadily increase.

Methane concentrations in the lake more stable than previously assumed

However, the latest measurements show that the methane concentration in the lake has been relatively stable since the 1970s or is rising only very slowly. The lake almost seems to be in equilibrium. Also, the lake is still far from CH4 saturation where spontaneous degassing can occur. The risk of a catastrophic gas eruption is therefore not increasing at present. However, the danger is not completely dispelled. An underground volcanic eruption could suddenly release the gas even at concentrations far below saturation.

But less encouraging are the new findings for the long-term use of Lake Kivu as an energy source. The two neighbouring countries, Rwanda and the Democratic Republic of Congo, have so far hoped that the gas taken from the lake will be renewed rapidly. This would enable them to continuously extract energy from the lake over a longer period of time. However, the new measurements mean that the energy source only slowly regenerates. Once the gas currently present in the lake has been used up, in the long-term much less energy than expected will be able to be used.

The new findings come from a measurement campaign carried out by Eawag in March 2018 together with the Helmholtz Centre for Environmental Research, the University of Grenoble Alpes and the Lake Kivu Monitoring Programme, Rwanda. The research groups used different measuring techniques. Eawag researchers continuously pumped the water-gas mixture upwards from the lake, separated it into a gas phase and water phase and determined the gas concentration with the Mini-Ruedi, a mobile mass spectrometer developed at Eawag. Researchers at the Helmholtz Centre filled their sample containers directly in the lake and investigated the gas using gas chromatography, and the group from the University of Grenoble Alpes recorded the methane directly in the lake using laser spectrometry. This enabled the researchers to collect and compare three independent data sets. Since the data sets are largely in agreement within the margins of error, the researchers assess them to be reliable. The researchers recently published the findings in the journal PLOS One.

Origin of the high methane concentrations in Lake Kivu

On the bottom of Lake Kivu, sources of CO2 are bubbling up. Because of the extremely stable vertical stratification of the lake and the high water pressure, the carbon dioxide (CO2) remains in the depths of the lake and accumulates there. Microorganisms, in turn, produce methane from the CO2 and sunken organic material. The methane also remains stored in the lake’s deep water because of its stable stratification.

Lake Kivu, East Africa, is well known for its huge reservoir of dissolved methane (CH4) and carbon dioxide (CO2) in the stratified deep waters (below 250 m). The methane concentrations of up to ~ 20 mmol/l are sufficiently high for commercial gas extraction and power production. In view of the projected extraction capacity of up to several hundred MW in the next decades, reliable and accurate gas measurement techniques are required to closely monitor the evolution of gas concentrations. For this purpose, an intercomparison campaign for dissolved gas measurements was planned and conducted in March 2018. The applied measurement techniques included on-site mass spectrometry of continuously pumped sample water, gas chromatography of in-situ filled gas bags, an in-situ membrane inlet laser spectrometer sensor and a prototype sensor for total dissolved gas pressure (TDGP). We present the results of three datasets for CH4, two for CO2 and one for TDGP. The resulting methane profiles show a good agreement within a range of around 5-10% in the deep water. We also observe that TDGP measurements in the deep waters are systematically around 5 to 10% lower than TDGP computed from gas concentrations. Part of this difference may be attributed to the non-trivial conversion of concentration to partial pressure in gas-rich Lake Kivu. When comparing our data to past measurements, we cannot verify the previously suggested increase in methane concentrations since 1974. We therefore conclude that the methane and carbon dioxide concentrations in Lake Kivu are currently close to a steady state.
See DOI
See Institutional Repository
Bärenbold, F.; Boehrer, B.; Grilli, R.; Mugisha, A.; von Tümpling, W.; Umutoni, A.; Schmid, M. (2020) No increasing risk of a limnic eruption at Lake Kivu: intercomparison study reveals gas concentrations close to steady state, PLoS One, 15(8), e0237836 (14 pp.), doi:10.1371/journal.pone.0237836, Institutional Repository