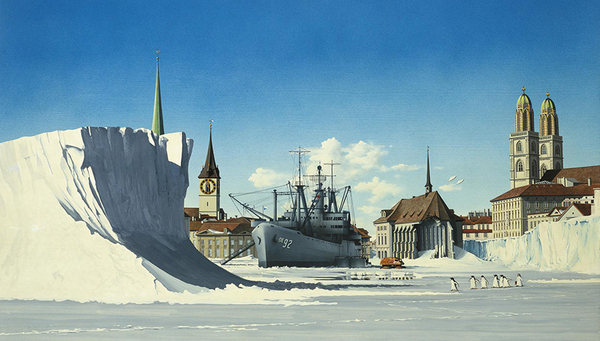 The last ice age, about 20,000 years ago, was significantly colder than previously thought. This is shown for the first time by systematically analysed samples of groundwater collected around the globe and the inert gases dissolved in it. Swiss groundwater from Uster (ZH) also contributed to the results.

The solubility of naturally occurring noble gases (from Helium to Xenon), depends on temperature as with other gases. If you analyse a groundwater sample, the concentrations of the noble gases dissolved in it tell you at what temperatures this water was in contact with the atmosphere before it seeped into the ground. However, it is much more difficult to determine how long the water remained there. Although there are methods for dating water, for example by drawing conclusions from the radioactive decay of uranium and thorium to helium-4, the results are shaky. In addition, the interpretation of the data obtained is also not very reliable because it is often based on the regional occurrence of certain plants or animals. Thereby researchers probably underestimated the fact that the species also migrated 20,000 years ago - to places where the climate suits them. “Animals are not such good thermometers," says Jeffrey Severinghaus, co-author of a study published today in the journal Nature by seven institutes from USA, Germany and Switzerland.

Relative rather than absolute dating is enough

Environmental physicist Prof. Rolf Kipfer of Eawag, the Swiss Federal Institute of Aquatic Science and Technology and the Department of Environmental Systems Science at the ETH Zurich explains what was done differently in the new study: Newly collected and existing groundwater data were for the first time systematically analysed according to a global standard for the temperatures at which the waters had still been in contact with the atmosphere. An absolute dating of the samples was not even attempted, but it was only determined relatively whether one sample was younger or older than another was. This resulted in temperature series, or a temperature curve, who’s minimum must correspond to the maximum of the greatest ice age. The global mean temperature was thus a full 6 °C lower than today (5.8 ±0.6°C). Until now, science has tended to assume 3 - 5 °C. Today we live at around 14°C, while our ancestors and the mammoths lived at 8°C or less.

The warmest regions are not immune to further warming

The new results from the noble gas analyses correspond well with new analyses from fossil marine plankton. These suggest much more cooling at low latitudes than earlier studies and a greater sensitivity of climate to atmospheric CO2 levels. "This is not good news in terms of future global warming, which could be stronger than expected based on previous best estimates," says co-author Werner Aeschbach, a professor at the Institute of Environmental Physics at Heidelberg University. "In particular, our global view supports the finding of several noble gas case studies that the tropics were much cooler during the last glacial maximum than they are today. So the warmest regions of the world are not immune to further warming."

Reliable because there is a physical principle behind it

"Paleo temperature records with noble gases are so meaningful because they are based on a physical principle and do not need to be calibrated. “So they are not influenced by short-term extreme events and life - which always complicates everything," says the paper's co-author, Martin Stute, a professor in the Department of Environmental Science at Barnard College, New York. Like Stute, Kipfer is excited about how the work published today brings nearly 40 years of research full circle: "It's remarkable and satisfying to me how consistent the noble gas temperature reconstructions are at low latitudes, from the early studies I led in the 1990s to the most recent," says Kipfer, who has studied groundwater samples from Uster, Zurich, as well as from Oman and Wisconsin, USA, among other places. The "noble gas thermometer", it now turns out, is remarkably accurate over a temperature range of between about 2°C and 33°C. "This strengthens confidence in new climate models, that assume severe cooling during the last ice age”, says Kipfer.

By the way: water that has been underground for 10,000 or even 100,000 years is not at all rare and usually of good quality. In Uster, for example, a drinking water well was drilled to a depth of about 80 metres in the 1990s and - rather accidentally - 30,000-year-old water was pumped up. In the meantime, younger groundwater has been flowing from rock layers further up. In countries such as Libya, however, deep groundwater that has once been exploited can no longer be renewed because the desert now lies at the surface.

Groundwater data from 26 different studies and from all continents (except Antarctica) were analysed according to a common standard for the first time. Among them are data sets from Botswana and Namibia.
(Photo: Justin Kulongoski, WHOI)

The magnitude of global cooling during the Last Glacial Maximum (LGM, the coldest multimillennial interval of the last glacial period) is an important constraint for evaluating estimates of Earth’s climate sensitivity1,2. Reliable LGM temperatures come from high-latitude ice cores3,4, but substantial disagreement exists between proxy records in the low latitudes1,5–8, where quantitative low-elevation records on land are scarce. Filling this data gap, noble gases in ancient groundwater record past land surface temperatures through a direct physical relationship that is rooted in their temperature-dependent solubility in water9,10. Dissolved noble gases are suitable tracers of LGM temperature because of their complete insensitivity to biological and chemical processes and the ubiquity of LGM-aged groundwater around the globe11,12. However, although several individual noble gas studies have found substantial tropical LGM cooling13–16, they have used different methodologies and provide limited spatial coverage. Here we use noble gases in groundwater to show that the low-altitude, low-to-mid-latitude land surface (45 degrees south to 35 degrees north) cooled by 5.8 ± 0.6 degrees Celsius (mean ± 95% confidence interval) during the LGM. Our analysis includes four decades of groundwater noble gas data from six continents, along with new records from the tropics, all of which were interpreted using the same physical framework. Our land-based result broadly supports a recent reconstruction based on marine proxy data assimilation1 that suggested greater climate sensitivity than previous estimates5–7.
See DOI
See Institutional Repository
Seltzer, A. M.; Ng, J.; Aeschbach, W.; Kipfer, R.; Kulongoski, J. T.; Severinghaus, J. P.; Stute, M. (2021) Widespread six degrees Celsius cooling on land during the Last Glacial Maximum, Nature, 593(7858), 228-232, doi:10.1038/s41586-021-03467-6, Institutional Repository
Created by Andri Bryner
Share with others: