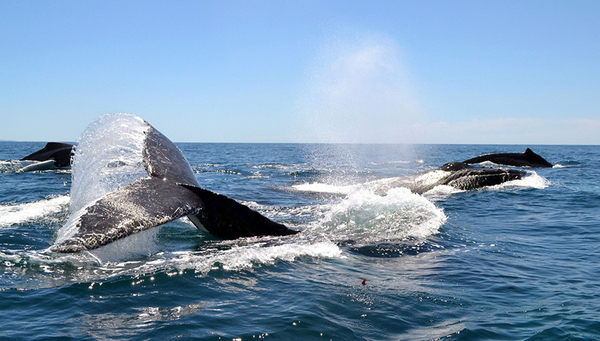 Although use of the fungicide hexachlorobenzene has been banned since 2004, this compound is chemically stable – and accumulates in the polar regions where humpback whales replenish their fat reserves each year. Cell line studies conducted at Eawag have now shown that, while hexachlorobenzene does not have acute toxic effects, it can cause damage to DNA in humpback whale cells.

Hexachlorobenzene (HCB), formerly widely used as a fungicide, is one of the so-called dirty dozen – the first twelve toxic chemicals whose use was banned worldwide in 2004 under the Stockholm Convention on Persistent Organic Pollutants. However, due to its chemical structure, this compound is extremely stable and is only broken down very slowly in nature. “For this reason, HCB is still found in the environment,” says Michael Burkard, a postdoctoral researcher at Eawag’s Environmental Toxicology department.

HCB is not only persistent but also, under certain conditions, volatile. It enters the atmosphere via evaporation over tropical and temperate zones and is subsequently deposited with rain or snow. Burkard explains: “This is the grasshopper effect whereby HCB is gradually transported to polar regions. But because it’s cold at the poles, HCB remains and accumulates there – so the polar regions are the natural sinks.”

This is precisely where the summer feeding grounds of humpback whales lie – in the seas of the Arctic and Antarctic. Here, for around three months, these marine mammals (15 metres long and weighing up to 30 tons) build up the fat reserves which they live off for the rest of the year – and which they require for their long migration (covering several thousand kilometres) to and from their winter breeding grounds in the tropics. Burkard says: “When the fat reserves are mobilised, fat-soluble substances, including HCB, are released. Various pollutants accumulate in fasting whales – on average, concentrations are increased two- to threefold in these creatures before they return to their summer feeding grounds.”

A special air rifle is used to collect skin samples from a humpback whale for research.
(Photo: Michael Burkard)

It is not known whether – and if so, how – HCB is toxic to humpbacks. Some light has now been shed on this question by experiments carried out on a humpback whale cell line by Burkard and colleagues at Eawag. For toxicity tests, the group uses cells cultured in the laboratory, thus avoiding the need for experiments in live animals (which would scarcely be feasible in whales in any event). For their study, the scientists developed a system which allows cells to be exposed to stable concentrations of HCB. As Burkard points out, this is not as easy as it sounds: “HCB is a challenging substance. As it may evaporate or bind to plastic materials or components of the exposure medium, the results of many previous studies are not wholly reliable.”

The results of the new study show that, at environmentally relevant concentrations (1–10 micrograms per litre), HCB is not acutely toxic to humpback whale cells. These findings are in agreement with the available literature. Burkard was, however, surprised by the results of the genotoxicity tests: while the cell line experiments do not directly predict in vivo effects, “We’ve certainly shown that damage to DNA is possible in whale cells.” And because – with a half-life of several years to decades – HCB will only gradually disappear, humpback whales will have to contend with this substance for some time to come, even though it has been prohibited worldwide for over 15 years.

Created by Ori Schipper, Andri Bryner
Share with others: