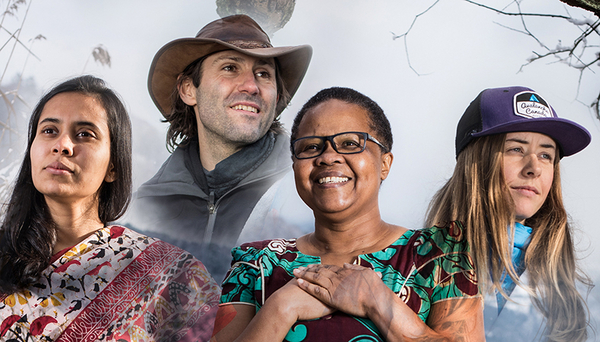 We at Eawag are particularly proud of the international composition of our employees. Dübendorf and Kastanienbaum are home to researchers, technicians, administrators and apprentices from over 40 different nations. We portray this diversity of cultures, languages and countries at our location in Kastanienbaum.

The series with Salome Mwaiko, Claire Aksamit, Tim Alexander, Rohini Athavale und Bernhard Wehrli was created as part of a photojournalism course that Christian Dinkel is tanking at the MAZ in Lucerne.

Salome is a mother of three and comes from the Kilimanjaro region of Tanzania. She has many stories to tell, and always with a lot of laughter. She grew up in a very traditional environment, where women married early and took care of the children and the household. Nevertheless, from a very young age, Salome wanted to go to university.

Her relatives thought this was brave on the one hand, but on the other, there was a lack of understanding. However, her father was a secondary school teacher who had studied in England, and he was very keen to see his daughter get an education. “I’m incredibly grateful for my father’s attitude towards equality in education”, says Salome.

She not only had to overcome cultural barriers, but also state ones. At the time, those who wanted to go to university in Tanzania had to complete one year’s military service. And so, at the age of 20, Salome spent 360 days in a military camp on the border of Mozambique, armed and dressed in camouflage.

She completed her bachelor’s degree in zoology and marine biology at the University of Dar es Salaam in 1984, and managed to get a job at the National Fisheries Institute, where she worked on sustainability projects for fishing in the Indian Ocean. Four years later, she received a scholarship to study fish resources and fishery management at the University of Bergen in Norway.

After working for a couple more years in Tanzania, she received a scholarship to study for her doctorate in the UK, researching the taxonomy of haploid cichlids at the University of Aberdeen, Scotland.

By then a mother of three, she thus emigrated with her children to Europe. Since her husband wasn’t happy there, Salome was soon having to fend for herself—in a new country, a new culture, with three school-age children and a PhD to finish, which began to look very elusive as her supervisor in the UK died only a few months after Salome arrived in the country.

“I was very close to giving it all up and going back to Tanzania”, says Salome. But then, by a stroke of good fortune, she got to know Ole Seehausen, who took over as her supervisor and eventually brought her to Eawag.

For her family, this meant getting to know yet another country. “My children hated me when they realised that they were going to have to learn German”, says Salome, with a hearty laugh. Although her oldest daughter has now returned to Tanzania, she and her other two daughters feel very much at home after 15 years in Switzerland—and she has no desire to go back to Tanzania.

Claire Aksamit comes from Canada. So it's not surprising that nature and outdoor sports are part of her passion. She studied environmental science in Ottawa, Ontario and Saskatoon, Saskatchewan and then worked as a consultant on natural resource and nature conservation projects in British Columbia.

In this role, she also taught indigenous people in reservations how to take and analyze water and fish samples for monitoring programs.  "That was pretty cool," says Claire, who could well imagine teaching later.

The Canadian has been working at Eawag for just over a year now. She is a research assistant in Martin Schmid's group, where she investigates the influence of hydropower on alpine small rivers. She followed her husband to Switzerland, who was given a Post Doctoral position at ETH Zurich. Claire also brought her dog Fern with her from Canada, "she accompanies me always and everywhere, she has been in my life longer than my husband," says Claire laughing. And when she says she takes Fern with her everywhere, she means it: whether on splitboard tours, climbing, hiking, or trail running -  Fern is there.

The proximity of Lucerne to the mountains is what Claire appreciates most. In her spare time, you can mainly meet her in Engelberg, Andermatt, or somewhere in the Uri Alps. "That's what I love about Switzerland: easy access to the mountains." Unlike in Canada, public transport takes you virtually anywhere - and ski tickets are affordable. Still: "I'm missing Canada quite a bit," she admits. The seasons are much more pronounced there and nature is more lonely.

Claire will still be at Eawag until the end of April 2020. "Where we're going next is in the stars," says Claire. She prefers to live from week to week and is open to all the possibilities that life will offer her.

We had arranged to do the interview over Skype at 13.30, but shortly before that, Tim messaged to ask if we could delay the conversation by a few minutes as he had to urgently chase a possum away.

“It’s happening several times a week at the moment”, explains the Australian a few minutes later. A number of possums have moved into the roof space of the neighbour’s house which Tim wanted to use as an office. Since one of them died in the roof, bringing the odour that one would expect, as well as maggots falling from the ceiling through the light installation, Tim has been trapping the animals and taking them a long way away from the house.

Tim has been back in Tasmania since January, where he lives with his wife and their two children in a community of 400 people—in their house on around 5,000 square metres of land. There are a dozen or so pademelons – a small, kangaroo-like animal – living in the garden, while Tasmanian wedge-tailed eagles soar above the house, keeping the rabbit population in check.

Tim was at Eawag for almost six years, where he was primarily responsible for Project Lac, in Ole Seehausen’s group. Before that, he completed his doctorate in Tasmania and a postdoc on the Solomon Islands, where he met Karin from Switzerland—now his wife, who was on an overseas placement as a medical student. And so Tim found his way to Europe, and finally to Eawag.

When asked about his favourite moments in Kastanienbaum, he comes up with many: the daily bike ride from Lucerne to Kastanienbaum, the inspiring work environment, the view over Lake Lucerne from the cafeteria, the forests and mountains – and the “fizzy water” that comes straight from the tap. Just one thing, though: “I definitely missed the surfing”, says Tim. Although he tried all kinds—from river surfing in the Aare, through bungee surfing, to surfing a standing wave in the Mall of Switzerland!

Back on the other side of the world, he’s not only back into his surfing, but has also found himself a new job, and is working as a consultant in an environmental office in Tasmania. “The work is incredibly varied”, says Tim. It’s mostly about supporting companies in environmental matters – from aquaculture, to salmon farming and harbour expansion.

Rohini Athavale couldn’t have found a starker contrast between her bustling home city of Mumbai and her current home of Kastanienbaum, where she moved to five years ago to work on her PhD. “I hardly knew anything about the place before I came here, but I simply looked forward to being surprised”, laughs Rohini.

But she was delighted to find that she could finally pursue her hobby of cycling as often as she liked—right on her doorstep. In India, she had hardly any opportunities to ride, except for the odd occasion in a nearby national park or on holiday with her father. Now she is not afraid of going for long bike tours. In keeping with the Eawag tradition, she cycles around Lake Lucerne once a year with a few Eawag colleagues during the bike-to-work week to get from Horw to Kastanienbaum in the mornings—no mean feat at 100km!

Thankfully, Rohini is a keen cook, which means that she can provide sustenance for herself and her friends after these big rides. “I don’t like cooking the same thing twice, so I’m always trying out new dishes”, she says. Most of all, she loves to cook the vegetables she’s lovingly tended in her raised beds—cucumbers, tomatoes, peppers, Swiss chard, chili, herbs…

Rohini studied chemistry in Mumbai and went on to develop electrochemical sensors for environmental measurements in a start-up company. In 2013, she worked in Cologne for a few months before deciding to come to Kastanienbaum to work on her doctorate.

As a member of Bernhard Wehrli’s group at Eawag, she designed and built sensors that enabled extremely high-resolution measurements of various parameters such as pH, carbon dioxide in solution or ammonia directly in a lake. “I especially enjoyed the variety that came with the project: from design, to development in the laboratory, to testing it out in Rotsee—it was all there!” says Rohini, who was at Eawag until July 2019. Now she works at Büchi Labortechnik, where she can follow her inventor’s spirit.

Bernhard Wehrli is not sitting in a bath in the photo just for fun—there’s a serious message behind it. The bath represents a typical scientific process: “The bath is like a limited box—a model that we always use in our research”, explains Bernhard. “We never study a lake in its entirety; we establish systematic limitations so that we can specifically observe what is coming in and going out, and so that we can record the processes in the closed system in a more controlled way.”

The photographer originally planned to photograph Bernhard in his specialist professorial setting: “But that wouldn’t really have been me”, says Bernhard with a laugh.

During his chemistry studies, Bernhard took a gap year, and, having realised very early on that the pharmaceutical route wasn’t for him, he instead worked for an NGO that was engaged in protecting high Alpine habitats and attempting to prevent hydroelectric power plants. “Sadly, we weren’t able to do that, but we nevertheless managed to save the Greina plateau from being flooded by a dam”, says Bernhard, whose interest in the crossover point between water protection and chemistry was kindled during that time.

He later completed his PhD in Dübendorf, and has remained with Eawag ever since, apart from a short postdoc stint away from the Aquatic Research Institute in the USA, and a couple of sabbaticals in France and Israel. Even when he was appointed Associate Professor at ETH Zurich in 1991, he never seriously considered upping sticks from Kastanienbaum. Since he has been regularly commuting between the two locations, he has come to appreciate the collegiality of Eawag all the more. “At ETH, everyone is very specialised, and so collaboration there is often difficult”, says Bernhard. He also greatly values the excellent field work situation at Eawag, as well as the huge support from the technicians.

Bernhard is currently focusing his research on the ecological value of wetlands and on the effects of dams on water chemistry.

And even though he is often sitting in front of a computer or in meetings, he hates to miss out on field work. Even though he confesses he may be “almost a hindrance rather than a help” amongst all the young, energetic researchers nowadays.